Big Turbo,Front-Mount, And Ecutek Combine For Some Insane Power On The Subaru Sti 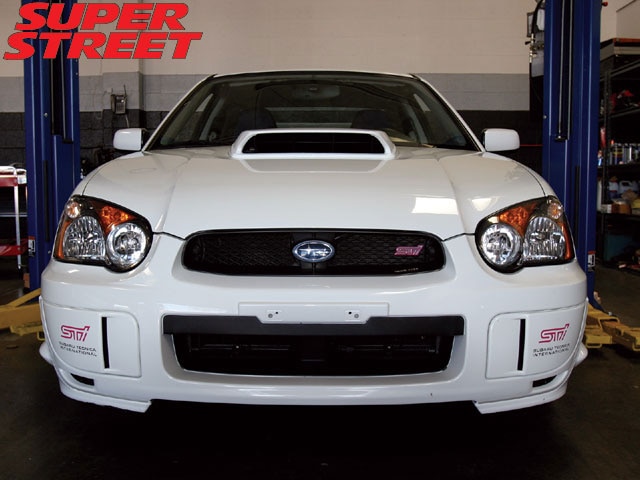 Since our last update, we've been having a great time driving the Project STi at the track and chasing down Porsche turbos. The TurboXS upgrades really woke up the car. However, the stock turbo still runs out of steam in the top end.

Never satisfied, we pondered until Dan Harman at Harman Motive called to pitch us on his Spec III engine package. He's got a lot of time on WRXs and has been experimenting on various upgrade paths for the STi since its release. He outlined his plan to get us 100-plus wheel horsepower compared with stock on pump and race gas with a few additional bolt-on mods.

Compared to its nemesis, the Mitsubishi Evolution, the STi isn't known for its ability to rev high. This is mainly because of Subaru's fairly small IHI VF39 stock turbo choice. It's good for street driving, but not ideal on the track. A larger turbo is the solution. The tradeoff is more lag. Our search for the ideal compromise led us to choose a Forced Performance FP4906H turbo. The FPGreen, as it's known, is a custom-built turbo featuring a 49 lb/min compressor and huge TDO6H turbine wheel. It can typically produce 400-450 whp with good spool-up response.

Along with the new turbo came higher air temperatures, so we felt the need for a larger TurboXS front-mount intercooler. Although the stock intercooler minimizes the length of plumbing and reduces turbo lag, it can also suffer heat soak when the engine gets too hot. This causes the engine management to drop boost, retard timing, and richen the mixture.

To complement the increased boost, Dan had to up the injectors to 800cc and the pump to a high-flow 255-lph unit. Dan also prefers to run the A'PEXi Super AVC-R electronic boost controller rather than leaving it to UTEC's mechanical system.

Unlike our first stage build, which could probably be done in your own garage by a competent mechanic, this stage is best left to the experienced. To start, we removed the stock TMIC and plumbing, along with the airbox and intake. We dropped the downpipe and unbolted the turbo after disconnecting the various oil and water lines. We then removed the front bumper and the stock energy-absorbing bumper beam assembly.

The mounting beam for the intercooler goes on first, attached with the stock bumper bolts. You must ensure the intercooler is level with the rest of the car so the bumper fits properly. The piping and hoses need to be assembled and loosely clamped. Don't forget to tighten the clamps later, as you could blow a hose under full boost and end up stranded at one o'clock in the morning on the side of the 405 freeway somewhere near Compton. Once the intercooler was bolted on, we had to trim plastic from the lower bumper opening. Despite being a direct bolt-on, mounting the FPGreen is not that easy due to lack of space. Once the turbo was bolted to the manifold and downpipe, we needed to squeeze the new Perrin inlet hose on and install the TurboXS intake and blow-off valve.

When everything was lined up, we double-checked all of the connections and tightened the hose clamps. Now we just had to add the new boost controller from the A'PEXi AVC-R and wire the electronics into the UTEC. The Perrin injectors are modified STi stockers, so they need to be swapped out just like the fuel pump.

We gave everything a final once-over, then lined up the front bumper and bolted it on. Recently, a new software from ECUTEK in England was developed that enables tuners to reflash the factory ECU with their own proprietary tuning maps. Unlike the UTEC piggyback system we'd been using, reflashing the ECU allows the factory active ignition timing to be retained. Unfortunately, at press time, reflashing the ECU using ECUTEK software doesn't give us the ability to switch tuning maps on the fly. To get over this, we chose to run the factory ECU with the ECUTEK software with a Harman Motive map for the daily street tune, and then switch to Harman Motive tuning maps on the UTEC for all other levels of tune, such as race gas.

After programming, allowing the ECU to "learn," dyno testing, and then road testing, Dan got a good street tune that safely allowed around 20 psi of boost pressure on 91 octane, while maintaining stock driveability. Our final numbers: 340 whp and 326 wtq with a linear power curve that doesn't drop off at high rpm. That's almost 100 whp more than stock on crappy California gas.

However, Dan had been teasing us with some really big numbers on 100 octane, so after a few days of getting to know our "new" STi, we sent it back to him. The 100 octane unleaded race gas allows us to run more aggressive maps with higher boost and leaner mixtures, as the high octane combats early detonation. Dan loaded a baseline map into the UTEC, and then switched engine management over from the ECUTEK program in the stock ECU using the in-dash map switch. He then spent time fine-tuning the map to extract maximum power. At an aggressive 27 psi, we hit 391 whp and a super fat 422 wtq. That's with bolt-on modifications only.

Like the stock STi, there is little turbo lag, although it feels like there is because so much more power comes in from 3,500 rpm. This is confirmed by comparing the dyno curves of the Spec III setup with stock, showing that on the low end they are pretty much the same. The car doesn't have the neck-snapping hit from the bottom that the Spec II gave. It's now a linear, long pull, similar to a jet taking off. You can run the car almost 2,000 rpm longer in each gear, and this really shrinks the distance between turns.

All in all, we're more than happy with this setup and highly recommend it. There is usually some compromise with this level of modification. We'll be updating you with more mods soon.

All this plus an exhaust and ECU mod equals a gain of 100 whp.

Front-mount vs. stock:bigger is better.

We cut a lot of plastic out of the front bumper.There's no going back now.

Stock vs. the FPGreen: Bigger is Better!

If this image was in focus you could see the mods. Greg is such a wanker!

Fitting the Green is a real pain and requires lots of patience. 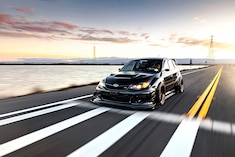 After owning Subaru's "Bugeye" WRX for years Thai Quan decided he wanted something with more appeal, so he got a 2012 WRX STI to build into something unique. 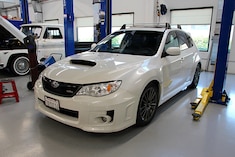 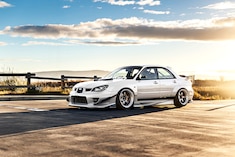 Kyle Carasi knows a thing about building a clean car. His 2007 Subaru WRX STI is subtle yet hard-hitting, maintaining that wow factor without being extreme. 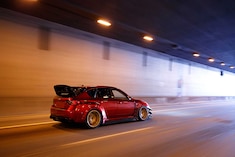 Quincy Yuen is an enthusiast who wanted complete control over his 2012 Subaru WRX build and he wanted to do it without any compromise or any sponsors. 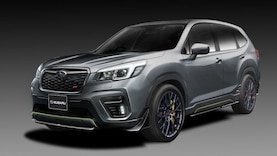 If you ever wondered what a current gen. Subaru Forester STI would look like, the mystery will end in January 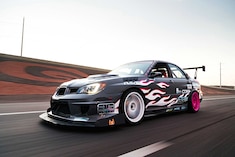 Sally McNulty and her 2007 Subaru Impreza WRX are a force to watch out for. Ever since they started racing the clock with GTA in 2013 they've earned 17 podium finishes and they're not showing signs of slowing down anytime soon.