Home  |  How To  |  Engine  |  K-Series Intake Manifold Shootout - Kapow!
Subscribe to the Free 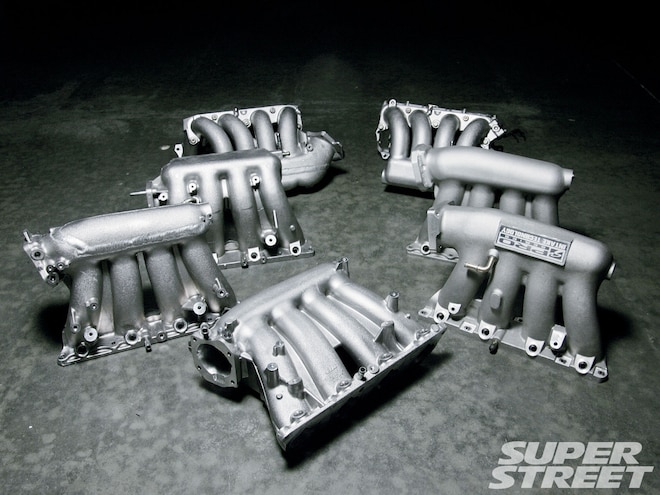 If you're an enthusiast like me, you too, are a member of a web forum(s) that relates to your car and/or engine swap that provides a rich source of technical information. For me, it's the K-series engine swap, and one forum I am a member of is K20A.org. This has to be the most popular, if not most technically filled, forum on the net for K-heads since this swap blew up in 2003. 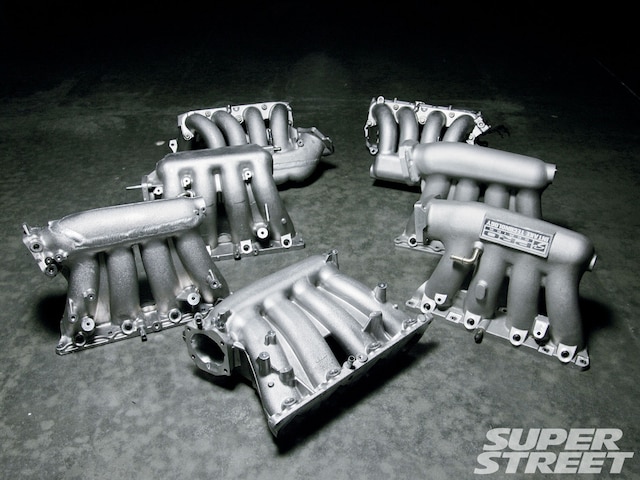 I'm also a fan of OEM Honda performance and parts. I like seeing what mixing and matching of the best OEM engine components will produce before having to go aftermarket. For the ones that know, K20s out of the box don't need much to make them fast - queue in the K-series intake manifolds!

Back at the end of July, Skunk2 finally released their K-series intake manifold to the public. I had the pleasure of being one of the first people to get my hands on one for test fitment on my K20A Type-R engine. My friend and ex-coworker from AEM (Rob Green), helped with the install and also photographed our install. The following day, I created a post on K20A.org using Robert's photos and lots of interest was generated. So much interest in fact, that it sparked the idea to dyno compare the most widely-used OEM K-series intake manifolds on the market today. That being said, these are the seven K-series intake manifolds I was able to get my paws on and dyno compare. Thanks to a couple generous K20A.org members, I was able to borrow a few manifolds I did not have access to. Some completely stock, some modified.

In addition to the shootout, I thought it would be proper to test out different sized throttle-bodies. But as it turned out, not every manifold was match-ported to 70mm. I had my stock 62mm Type-R t/b ported by Maxbore, which became 64mm tapering out to 70mm - similar to a K-series Spoon ported throttle-body. Blox Racing donated one of their new billet 70mm t/b for the shootout. Rob luckily had a ported Accord t/b which was originally 60mm, but was Maxbored to 62mm tapering out to 64mm (not shown). The Accord t/b was used on manifolds that were not match-ported to anything larger than 62mm - this included the BPR RBC and Endyne ported RBB manifolds, and were a direct bolt-on affair, no need for a throttle-body adapter plate! Excluding the stock RBC, all other manifolds were opened up to 70mm.

The shootout was performed on my own K20-R-powered '92 EG Civic at Erick's Racing Engines (ERE) in Baldwin Park, California. Internally, my engine is stock, meaning no aftermarket cams, valvetrain, pistons or headgasket - all stock Type-R internals. The mods my K20-R does have are the following: Acura RDX 410cc injectors, KPRO ECU, Rcrew 4-1 header, custom 3" exhaust with mandrel piping, AEM hybrid CAI and thermal intake gasket. With K20A-R to K20A2 (US Type-S), the only big differences are the slightly higher compression pistons (11.5 vs.11.0) and better camshaft profiles. I think this is a good base to start with and reference, especially for those K-swappers who want to leave their engine internals mostly stock.

Katman Says: Not only did Erick reach 228whp but he managed to reach the 150+ torque range, touching on the RBB's torque output! RRC hype understood.

As you can see with these results, for an internally stock K20A Type-R engine, the tuned RRC wins hands down. It makes the best top end power and even gets into the 150 torque marker. On the other hand, the Endyne ported RBB makes some serious mid range torque gains over all of the manifolds. Comparing both powerbands you can see where the RRC and RBB manifolds shine the most. Skunk2's manifold held its own against the RRC. BluePrint's RBC didn't do too bad either for being on a stock, smaller liter K-engine.

With these final results, on top of having a skilled dyno tuner, cam angle seems plays the biggest role in tuning the K-series engine.

The "PRC" manifold is found on the JDM K20A Type-R engines. The U.S. equivalent or "PRB" is found on the '02-06 RSX Type-S (K20A2/Z1) and '02-05 Civic Si (K20A3), with slight differences in runner design. I've been using this manifold since day one of my K-swap, so about five years now. The baseline run was rather disappointing, as I've been driving on an un-tuned KPRO startup calibration for quite some time. I had VTEC set to 5300rpm and redline at 8800rpm. Power to the wheel as my current engine setup stands (with the 64mm throttle-body) was 193whp/136tq.
2. ENDYNE PORTED RBB -.2HP +11TQ
The "RBB" is a two-piece intake manifold that comes from the '04-08 TSX. This one is owned by a k20a.org member who had it ported by Endyne with a special "K20" specific port job. Endyne cut open the plenum to fully gut this beast out and then welded the plenum back together.
3. STOCK RBC +5HP +.6TQ

The "RBC" manifold is currently the most widely-used K-manifold to upgrade to for the K20 and K24 engines. It especially shines on the K24 Frankenstein swaps (K20 head/K24 block). Its design has short runners and a large plenum, great for top-end power. In comparison to the PRC, the RBC drops about 5hp in areas of the low end and mid-range, but has better top-end power after 7200rpm to redline. Final results made 219whp/144.6lb-ft torque.
4. SKUNK2 PRO K-SERIES +10.4HP +2.4TQ

Behold the long awaited Skunk2 Pro K-series intake manifold. Still fairly new on the market, I was able to borrow this manifold from a fellow K20A.org member (pb16b aka Jason at Suja 1 Motoring). Now this manifold was dynoed by a couple other K20A.org members who didn't have pleasing results. This did not discourage me.
5. BLUEPRINT RBC +5.3HP +1.3TQ
BluePrint Racing is one of the highest regarded K-series engine building shops known. They offer services such as their popular "BluePrint intake manifold" which is a thorough port job on the RBC intake manifold. Their port job is geared towards the big boy K24A engine builds. The BPR port job requires the cutting and opening of the RBC plenum so the runners can be accessed more easily. Porting is performed and once done, the cut plenum piece is welded back into place.
6. RAA MANIFOLD -10.5HP +7.4TQ

The 2-piece "RAA" intake manifold is found on the '02+ CRV, '03+ (4cyl) Honda Accord and '03+ Element. It is very similar to the RBB TSX manifold design, but has a smaller plenum and a 60mm throttle-body hole in comparison. A lot of Accord/CRV/Element owners upgrade to the RBB manifold because of the larger plenum, which shows some healthy torque gains. Curiosity made me want to see what kind of power this piece would produce on a K20A engine. This RAA was left completely stock except for the throttle-body hole, which was opened up to 70mm.
7. RRC MANIFOLD +14.5HP +8.6TQ

The "RRC" manifold is found on the JDM '06+ Civic Type-R (FD2) K20A engine. Physically, the RRC looks almost identical to that of the RBC but has some significant differences upon closer inspection. On top of costing almost double what the RBC is, the runners are wider and a bit longer and the plenum seems to have more of an oval shape (internally) versus a rounder shape. There is a lot of hype surrounding this manifold on the forums and I wasn't sure why. I gratefully thank K20A.org member 6spd_EK (Greg) for lending me his RRC for this test as I had no other access to one. As mentioned earlier, there is no IACV port on this manifold, so one had to be created for the IACV to work. Luckily Greg already had this pre-done for me!

This was the best he could tune with the 64mm t/b. We moved onto the 70mm t/b and power was almost identical to the 64mm t/b except top-end power falls earlier right around 8500rpm. Erick played with fuel and cam angle some more and hit 226whp/150tq while fixing top end loss! He felt he could get a little more cowbell from this manifold and in the final pull was able to hit 228.5whp/152.6tq -- just amazing!

Not only did Erick reach 228whp but he managed to reach the 150+ torque range, touching on the RBB's torque output! RRC hype understood.