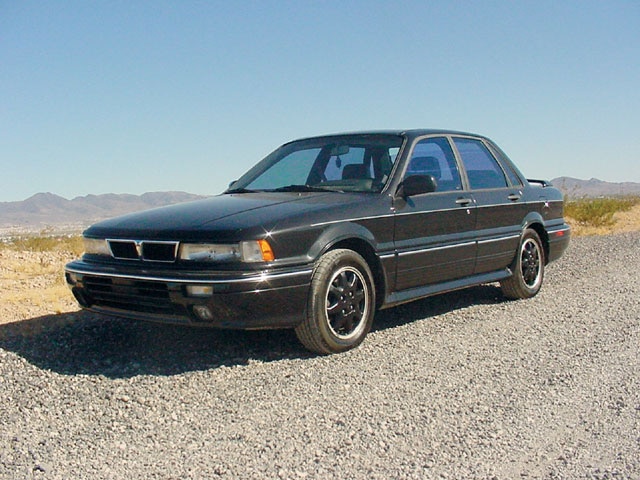 In last month's dyno cell, we added power with the three most typical mods you can make to any turbocharged engine-intake, downpipe and exhaust system. The results were an incredible 30hp and 55 lb-ft gains in performance. In Part 2 of this Dyno Cell series we will add a performance cat, upgraded intercooler and bigger mass air sensor to again enhance flow into and out of the engine. It should be noted that many of the mods here are beneficial to Eclipse and Talons with the 4G63 powerplant.

The 1990 to '94 DSMs with five-speed transmissions came standard with a 14G Mitsubishi turbo. Most enthusiasts tend to install an upgraded unit that is overly large, and doomed to never perform to its full potential. Many disagree that the stock turbo can make 300-plus horsepower at the crank. It can-and has-with the right combination of bolt-on parts. With the Galant, we will max out the stock unit just to see how close we can get to 280 hp at the wheels.

Removing the restrictions of the stock exhaust system made a significant improvement last month. In this installment, we will swap the stock 2-inch cat for a high-flow 2.5-inch unit, which matches the size of our upgraded exhaust system, thereby eliminating another restriction. On the intercooler front, it's amazing that such a small front-mount unit was able to cool the charge air much at all. Just looking at the pictures, one can see the Spearco upgraded unit is more than three times the size. The Spearco's superiority is even more clearly defined when looking at the thickness of the core and not just the length and width. Its internal flow is 1080 cfm with less than one psi of pressure drop, more than enough for any future upgrades and demands. The intercooler also allows us to use 2.25-inch i/c piping and a new throttle body elbow of the same size, meaning there are no restrictions from the chiller to the engine.

Off To The Dyno Cell
The first modification to step up to the plate was the Spearco intercooler. The 4G63 showed a significant improvement as horsepower jumped from 220 hp (where we left off last time) to 251 hp. Torque jumped from 254 lb-ft to 286 lb-ft. The overall boost level jumped almost 2 psi with the intercooler upgrade, a vivid illustration of the inefficiency of the puny stock unit.

Next on the list was the 2.5-inch catalytic converter. With the Dynojet sampling, power on the second run jumped once again, stopping at 259 hp and a whopping 304 lb-ft of torque. Unfortunately, a common DSM ailment reared its ugly head-it's called fuel cut. When the factory ECU sees a large volume of air pulled through the stock mass air unit, it cuts fuel and spark to the engine momentarily to reduce engine speed and power to a safe level.

Many enthusiasts mistake this for not having enough fuel. Many enthusiasts learn to adjust their boost level for different weather to avoid the dreaded cut. Others hack and cut the factory mass air meter in an effort to fool the ECU into thinking less air is entering the engine. They then add more fuel with larger injectors and trim the pulsewidth with an A'PEXi AFC or the new HKS AFR. Another option is to adapt a 2g Eclipse mass air unit. Having tried that, it does work but is a little tough to both install and tune.

Is there a plug-in cure? In many cases, one or more piggyback fuel computers can be used to rectify the situation. There is another option-one that is new, a little more user-friendly and easier to install.

Enter TeamRip Engineering, or simply TRE. The company originally started with a hot-wire mass air based fuel computer for both the 1990 to '94 and '95 to '99 4G63 Talon and Eclipse. Recently TRE has developed a new 75mm hot-wire unit that simply plugs right into the factory harness. The unit has a small box that, with a simple flip of dipswitches, can run 450, 550, 660 or 720cc injectors. Talk about versatility. No chips to change and no restriction means a 4G63 is capable of flowing over 650 hp. The TRE unit comes with a K&N cone filter, complete installation and tuning instructions.

Back on the dyno, the Galant still suffered from fuel cut but 271 hp was extracted and torque checked in at 302 lb-ft-still a noticeable gain. On the street the Galant is just as smooth as stock with much more mid-range and top-end thrust.

To completely remedy the fuel cut problem, as well as raise the rev limiter, we chose to have Technomotive (TMO) reprogram our ECU. Other ECU options are available through TMO, such as stutter box mods for drag racing, convenience mods with the stock gauges to display actual data such as timing behavior and air/fuel ratio and even a security program to prevent starting of the car.

TMO's datalogger system is by far the most useful when working on this particular engine. Invaluable information is gathered and displayed on a laptop. The user can select which variables they desire to monitor from a table of choices. The system goes far beyond just reading error codes and clearing check engine lights and is well worth the cost.

In our next installment, we will install a basic upgrade turbo, along with a fuel pump, AFC fuel computer and maybe a boost controller. We may also address adding a new ignition box.

So far, boost has increased from a stock level of 11 psi, to 15 psi by virtue of improvements in flow restrictions. Testing shows boost spikes to as high as 20 psi at the beginning of a dyno run but boost falls off to 15 psi as engine speed climbs past 5000 rpm. The jump in boost and the spike are loud testaments to the rewards that await those who know where the power is hiding-in the restrictive OE pieces.

While the stock turbo has performed admirably to this point, we can't wait to see what the power output will be with a new turbo and associated components. This may be putting it a bit mildly because we have produced output gains of 80.9 hp and 104.5 lb-ft of torque since the inception of the project. These are impressive numbers considering the relative simplicity of the products and their installation. Stay tuned.

We throw a Turbo XS HPBC and Apexi AFC onto our Mitsubishi Galant 4G63. See what kind of power it makes after the new additions. - Turbo Magazine 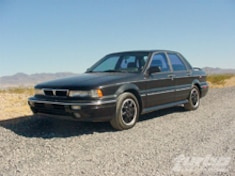 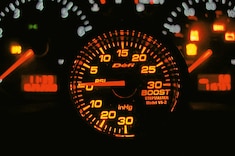 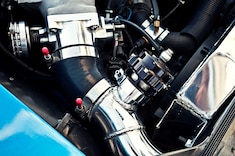 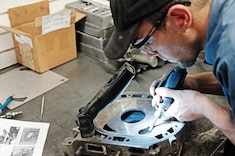