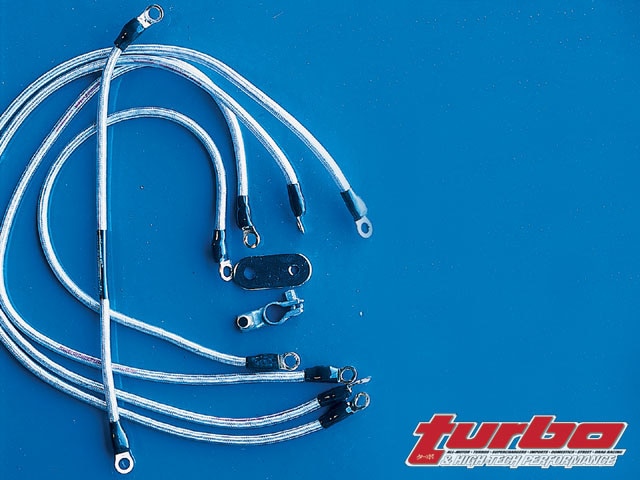 One day Eric Hsu from XS Engineering gave us a call to tell us about a new product they've been installing on a lot of cars.

"Dude, you have to check out these Hyper Ground System cables."

"It replaces any car's grounding system and makes horsepower through reduced electrical resistance."

"Believe it. Come over here and I'll show you."

Knowing the XS Engineering crew isn't new to making horsepower, we gave them the benefit of the doubt and took a short trip to see for ourselves exactly what Eric was talking about.

You wouldn't want to install a 2-gauge power wire for your sound system and a 20-gauge on the negative side, right? So why would you do the same for the engine?

What's so special about the Hyper Ground System and why can't you use any old wire to do the same thing? The high quality wires provided by Sun Auto are constructed of almost pure copper. Since electrons travel only on the outside of each strand of wire, each Hyper Ground wire uses 1477 strands of 99-percent pure copper wire. Other grounding systems use less than 300 strands and some other brands use only aluminum wire that costs less, but doesn't perform nearly as well as copper wire. Even the accessories included with the kit (e.g. battery adaptor terminals, wire lugs, etc.) are made of almost pure copper. 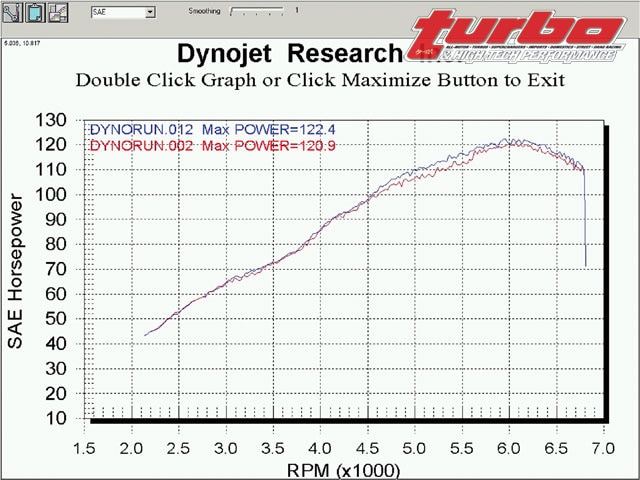 In addition, Sun Auto exclusively owns the international patent for the daisy chain type of grounding system. Other ground systems must either make a circle (i.e. start at one point, and return to the originating point) or use a distribution block and then distribute the ground wires throughout the engine. The Hyper Ground System allows a cleaner installation because of the method of installation.

All of this sounds great on paper, but as with anything else that sounds too good to be true, we needed to see some proof. Still a bit skeptical, we dyno-tested several cars before and after on XS Engineering's dynamometer.

Installation is relatively easy and requires only simple hand tools. The cables are attached to the ground points in a series or in daisy-chain configuration with one cable directly attached to the next. A supplied battery terminal adaptor mounts on the negative post of the battery.

From there, two cables attach to the terminal adaptor, with one attaching to the chassis and the other attaching to the first ground point. Then the Hyper Ground cables should be attached to the intake manifold, head, block, transmission and finally the opposite shock tower or any other point on the chassis.

There is no particular order in which the cables must attach, but, again, they must be attached together in a series or daisy-chain fashion.

Last, tie up all ground cables with supplied wire ties for a clean and tidy installation.

As we found in our own testing, sometimes altering ground points can affect performance increases. For example, on the S2000, there were minimal gains with a ground point on the head. When we moved the ground point to the ignition coils, we gained a significant amount of power. On other cars, we tried multiple grounding points such as ignition coils, ignition igniters, factory ground unions, etc., to maximize performance.

Ultimately, to maximize performance gains, dyno-testing may be required. However, there was never a loss in horsepower on any of our five tests, regardless of grounding points.

For the tests, we chose three cars that come in relatively common modified trims: 1995 Mazda RX-7, 2002 Honda S2000, and a 2002 Suzuki Aerio. We simply baselined each car, installed the Hyper Ground System, and then made another dyno pull.

Each and every car showed some kind of improvement, some cars more than others. In some cases, we had to change the locations of the grounding points to find maximum performance gains. This was probably because of the cars' relatively mild state of tuning.

Both Sun Auto and XS told us that highly modified cars would see even more significant gains in horsepower, because modified cars generally have a greater demand placed on their electrical systems.

Overall, we were amazed at the power gains these cars generated with the Hyper Ground System.