All tints aren't created equal--keep your car cool without attracting attention to yourself. 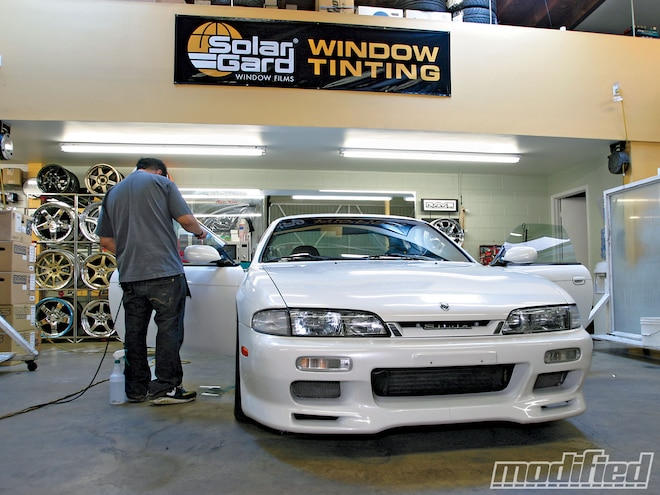 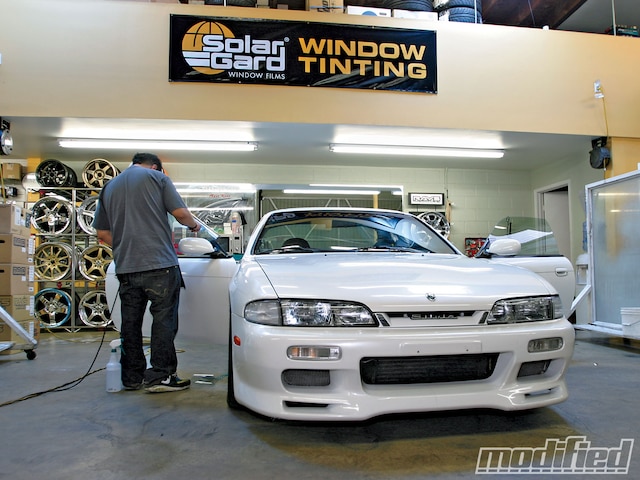 Description
When it comes to tinting your vehicle, most people fall into two categories: those who want to stay cool, and those who don't want to be seen. The problem is most law enforcement officials don't like it when they can't see what you're up to behind the window; unfortunately, this makes it a problem for those of us who just want to stay cool behind the wheel. While every state has differing laws regarding how much and where your car can be tinted, the general rule is that cops won't be happy until they can see what you're doing in the driver seat from far away.

Photo 3/6   |   Prior to heat-shrinking and installation, each piece of Ultra Performance 75 film is initially cut to shape on the window and then edged here on this Plexiglas board.

While the common conception that a darker tint keeps you cooler is partially true, new automotive window film technology provides another way to stay cool without getting hassled by The Man. Several companies have created new formulations for advanced window films that keep a large amount of heat out while still letting most visible light through so you can look out and police can see in.

We tried Bekaert's new Solar Gard Ultra Performance 75 window film with nanotechnology. The 75 represents the percentage of visible light that can be seen through the film and is the lightest shade in the line, which stretches down to the Ultra Performance 10 that only lets in 10 percent of the visible light. The idea behind these new nanotechnology films is to let light in and keep heat out.

The Ultra Performance series is Bekaert's top-of-the-line automotive window film that incorporates nanoscopic ceramic particles embedded within the film's construction. This nano-technology is sized and spaced so that it reflects more longer-wavelength infrared energy, while allowing shorter-wavelength visible light to pass through. This allows for more heat rejection without the super-dark color. While ceramic technology isn't new, what makes the Ultra Performance series special is that it was engineered specifically for automotive use instead of a reformulation of an existing residential window film. This means that it can be heat-shrunk to conform to complex curves with minimal ghosting or visual distortion. It's also only 0.0002-inch thick, making it much easier to work with.

According to Bekaert, the Ultra Performance 75 will reject 40 percent of the total heat energy that radiates through automotive glass as well as 99 percent of all UV energy while still allowing 75 percent of all visible light to pass through.

Results
Although the Ultra Performance line of tints has six increasingly darker shades, we chose the clearest 75-grade film to test. Prior to tinting the car, we took some baseline measurements on a typical sunny Southern California day. We left the car outside for three hours with an ambient exterior temperature of 76 degrees Fahrenheit. Surface temperature measurements were then taken from the top of the steering wheel, center top of the dashboard, the black metal shift knob and a bottle of water left in the passenger seat. Even on a mild 76-degree day, all measured temperatures inside the car were well in excess of 100 degrees due to the greenhouse effect in the cabin.

The pros at Best Tint Auto Center in Stanton, California, performed the tinting on our 240SX. Best Tint Auto Center is one of the leading installers of Solar Gard products, and the company has plenty of experience with the Ultra Performance line. To show just how effective and stealthy the Ultra Performance 75 is, we had all window surfaces treated-including the windshield, which lets in much of the heat on the control surfaces in the car. Best Tint uses a mix of dry and wet shrinking techniques to wrap each film to the glass with minimal ghosting. They even pull off a few interior panels to ensure proper seating of the film edges.

Photo 6/6   |   We had Best Tint temporarily tint our window in sections to show the difference of each shade in increasing opacity, starting from the left: bare glass, Ultra Performance 75, 40, 30, 20 and 10 films.
View Photo Gallery (6) Photos

Our next-day test under the same conditions was almost 10 degrees cooler than without the film. While driving, the heat and burning sensation on your skin is definitely different. It's almost better to drive with the windows up. You don't need sunglasses and there's a lot less squinting on account of the glare reduction. Visual distortion is minimal through the windshield or looking through the rear glass using the rearview mirror.

The best part is that the car looks stock, especially if the interior color is dark. The combined effect of shade and darker colors inside makes the tint nearly undetectable. Even when viewed from inside or outside through polarized sunglasses, the rainbow effect from dual polarization is negligible.