Home  |  How To  |  Project Car  |  Project Audi: Part 3 Turbo and Exhaust Upgrades
Subscribe to the Free

The joy of turbocharging 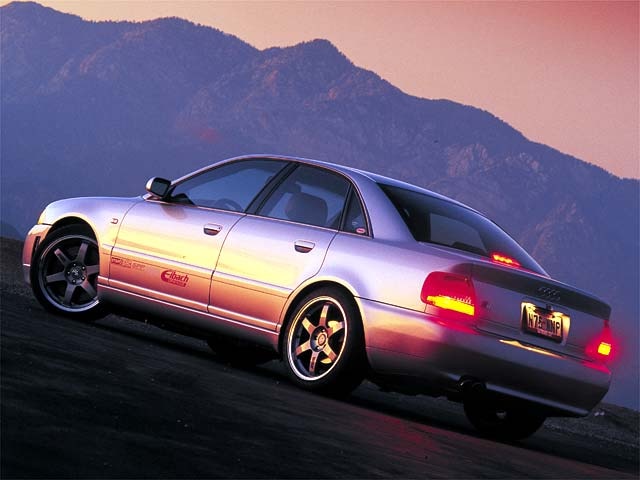 Buying a factory-turbocharged performance car is often done for one reason--"tuneability." Thousands of dollars can be spent increasing a normally aspirated engine's output by a nominal amount, but a turbocharged car's power can be effectively upgraded by a simple increase in boost pressure. Out of the box, the Audi S4 is comparable to an E36 M3 in a straight line. But, though they start off with close to the same performance, a budget of a couple thousand dollars to increase each car's power will result in the S4 handing the M3 its ass.

If you've been following ec's Project M3, you may have noticed that getting the car past 300 wheel horsepower involved marriage-threatening expenditures. With the Audi S4, however, the hard work has been done by the factory. The car already comes with two turbos, and all you have to do is make those whinging little snails work a little harder.

We decided to try some of Audi Performance and Racing's (APR's) hardware and software on Project S4, namely the Stage 2-plus kit. (APR also gets serious power out of the 1.8T motor: see ec, April 2002). As we outlined in Parts 1 and 2 of this project, our goals for this car required only simple upgrades, meaning the turbos would stay stock.

APR is one of the big boys when it comes to Audi tuning. The company has sophisticated tools and technologies in-house, including the Pro/ENGINEER CAD/CAM software suite, stereolithography (SLA) rapid-prototyping, a four-wheel chassis dynamometer and CNC machining.

The Stage 2-plus kit for the S4 features APR's revamped ECU for more boost, a full exhaust system from the turbo downpipes back, an engine snub-mount kit, a BiPipe kit and a K&N replacement filter. The most impressive part is the chip upgrade. With four different settings, the driver can toggle through different program settings for various driving environments using the cruise control switch. At the first level, the boost level remains stock (ideal for when the car is taken in for service). Level 2, for street gas, raises the boost level to 1.0 bar (about 14.5 psi). Level 3 is the "race-fuel" setting, which uses the same boost pressure as Level 2 with more aggressive timing. APR stresses that the Level 3 setting can only be used with 100-octane race fuel. Too much boost and advanced timing with a low-octane fuel can destroy an engine (just look at what happened to Project M3 last month). Finally, Level 4 is a valet mode and features a hefty 0 psi of boost, a crankshaft-shredding 5000-rpm rev limit and a blistering top speed of 50 mph. You can use this setting for racing Civics, but watch out--you might lose.

Because APR is in Alabama and we're in California, APR directed us to its West Coast distributor and installer, Hartmann Motorsports. Scott Hartmann, its founder, has an extensive racing background, including racing in the WRC and Motorola Cup, where he campaigns an Audi. His knowledge and expertise, paired with experienced technician Fabryce Kutyba, delivered a trouble-free installation--but that doesn't mean it's simple. The downpipes alone, because the turbos are so hard to get to, take over 10 hours to install. Plan to leave your car for a few days.

When I returned to pick up the car, Scott and I drove Project S4 around, hooked up to his VAG scan device. At the street-gas 1.0-bar setting (Level 2), although it's evident there's a tremendous increase in torque, we found the car's ECU pulled back timing by up to 7% under full throttle. After repeated runs, Project S4's hesitations became more pronounced and I grew worried. I switched to the stock 7-psi setting and the car pulled smoothly. When I asked Chris George of APR about it, he said the Stage 2-plus for the 2000 model year S4 hadn't yet been tuned for 91-octane fuel. APR claims it has 91-octane programs for 2001 and newer models as of this writing, however, and is working backward to give us Californians some fun in our S4s.

To see if it was indeed a fuel problem, I mixed in several gallons of 100-octane race gas, and the hesitations stopped. You've got to love California's unleaded 91 octane--now we're forced to add a few gallons of expensive race gas to avoid blowing up our high-performance motors--how convenient. With 93 or higher octane, one should be able to run Level 2 straight and enjoy the additional performance of 14.5 psi with no problems.

I saved the best for last--Level 3's race gas setting. I contacted Down's Oil Company, a large distributor for Sunoco Race Fuels in Corona, Calif., and acquired some of its GT 100 Unleaded gas. The Antiknock Index (R+M/2) of this fuel is 100, with Research and Motor Octane ratings at 105 and 95, respectively. The fuel is street legal, designed for high-performance street cars, motorcycles and karts, and contains no metallic compounds to harm catalytic converters and oxygen sensors.

I ran Project S4 dry of the pedestrian owl piss it was using and filled it with straight 100 octane. Eagerly, I jumped in and started it up. I set the cruise-control switch to the race gas setting and drove around for a minute, giving the car a period to adapt and to make sure the 91-octane fuel was purged from the fuel line.

I shoved the accelerator to the carpet for the first time and couldn't believe my eyes. Everything was moving so fast! The tachometer zipped to redline in first gear before I could respond. As I climbed through the gears, within seconds the speedometer had me wondering whether I was going to make it to my dinner date with my fiance that night--not because the car wouldn't make it, but because I might have only one phone call to tell her I'd be late--very late! With the race gas setup, the car felt like it could take on the world.

It was then that I began to believe APR's claim of a 12.9-sec. quarter-mile run at 108 mph with this exact setup (visit APR's website and download the video). APR's Stage 2-plus kit for the Audi S4 is no joke. With the 1.0 bar setting on pump gas, an APR-tuned S4 will most likely pull on many of the high-performance European cars out there today, including the E36 BMW M3 and the Porsche Boxster S. On the 100-octane setting, you'll have Porsche 3.6 Carrera and BMW M5 owners asking what you've got under the hood. 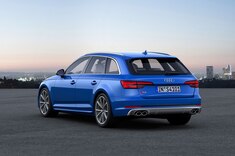 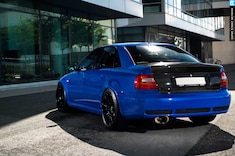 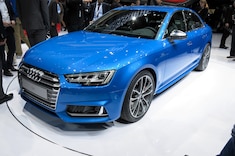 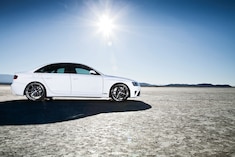