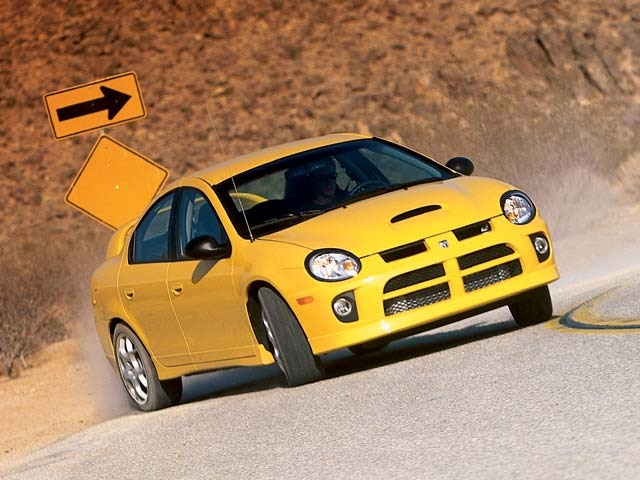 If the Dodge SRT-4 needs anything, it's a limited-slip differential, not more power. For 2004, it's getting both. In addition to a factory-installed Quaife differential, the new SRT-4 is getting a ratings boost from 215 hp to 230. As anyone with a right foot already knows, the "215 hp" SRT-4 was already underrated, making 223 hp at the wheels on our Dynojet. So is the new power real, or just a ratings adjustment? That depends on the weather.

We dyno test with a decent fan and a monkey spraying water on the intercooler. This, we've found, is a reasonable simulation of the 80-mph breeze that should actually be blowing across the intercooler at the top of third gear. DaimlerChrysler tests with a relatively hot intercooler, so it gets less power. The SRT-4's engine management actually adjusts for hot weather by increasing boost until it's making the same power it would in cold weather, so there should still be no difference. Problem is, the 2003 model had injectors that weren't quite big enough to allow full compensation under DaimlerChrysler's test conditions.

For 2004, injector flow rate has been bumped up 10 percent, leaving the headroom for better altitude and temperature compensation. Because DaimlerChrysler measures injector flow differently than the aftermarket, getting a useful flow rating is difficult. In DC world, the new injectors are 577 cc/min. In our world, with lower fuel pressure (43 psi is the older standard; DC uses 58.) and different test fluid density, we think they may be considered 378cc/min. We'll bench test some when we get our project car.

With the new calibration, we've been told to expect about 5 hp more under our test conditions, and about 15 in more severe heat.

But power isn't enough to satisfy some of you. Since our first test of the car, we've received approximately 6,000 letters saying exactly the same thing: "Sure the SRT-4 is fast, but it's still a Neon. It'll break down before the end of the quarter mile, blah blah blah..." We really wanted to shoot back some knowledgeable defense of the poor Neon, but ignorance held our tongues. Sure, the 70,000-mile powertrain warranty suggests some level of engine strength, but we'd never actually seen inside one.

To close this glaring knowledge gap, we went to Michigan with a camera and a list of geeky questions about rod bolt diameters, valve angles and combustion dynamics.

What we found is a ridiculously strong-looking engine that should survive many a quarter mile. You can thank the PT Cruiser for the SRT-4's powerplant, as it was a desperate need for a horsepower-based PT sales boost that justified turbocharging the 2.4-liter engine and gave the development team the signal to go overboard.

With a short deadline on engine development, there was no time to prove the durability of low-cost, marginal-strength parts. Where typical engine development teams would spend time whittling away pennies finding the least expensive design that could meet durability targets, the turbo 2.4 team just threw in stronger parts and more expensive materials, cost be damned.

Along with its beefiness comes heft, however. The SRT-4 engine weighs 339 pounds (with the alternator, but without the A/C compressor, power steering pump, or any oil in the pan). That's enough words, look at the pictures. n

Under the Hood: DodgeSRT-4
Photo /