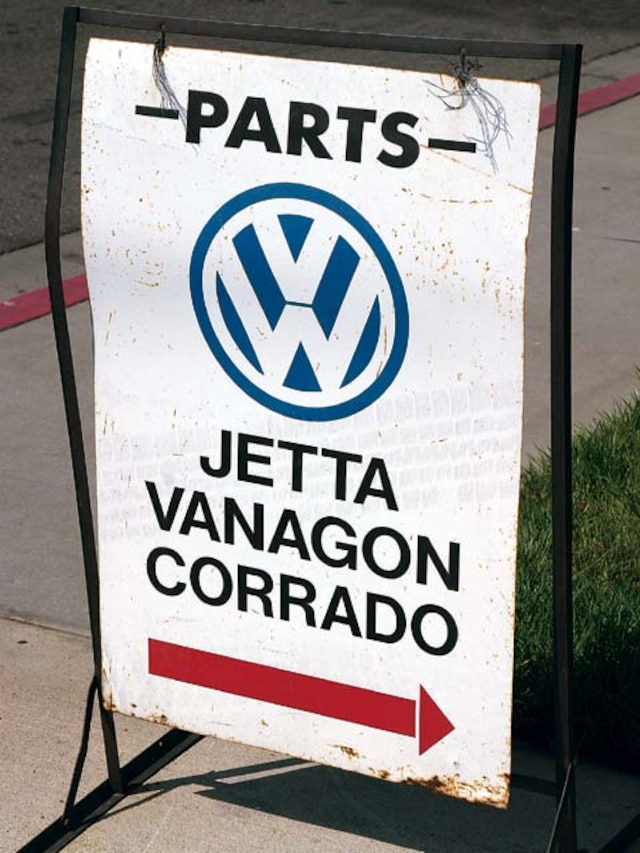 I got a letter from a reader congratulating me on a fine choice in vehicles. Apparently, he, too, was a Corrado fan and, like me, wanted to see more of VW's last, true sports car. For the most part, the letter's tone was amicable, right up until the end, anyway.

"I hope you do more to your Corrado than the basic bolt-on bullshit...that would suck, man."

The last thing I want to do is build a car that sucks. To be honest, however, more than a few times I've been tempted to simply call the project quits--why mess with something so fundamentally good? The Corrado SLC manages to blend superb performance, hammer-like reliability and classic styling that continues to please, even among today's crop of sports cars. I doubt the Corrado SLC will ever do a 13-sec. quarter mile, it won't pull a full g on the skidpad, and I don't think it will ever top 160 mph. Reducing a car as noble as the Corrado to a "numbers slut" seems criminal--I'm not going to fall for that. 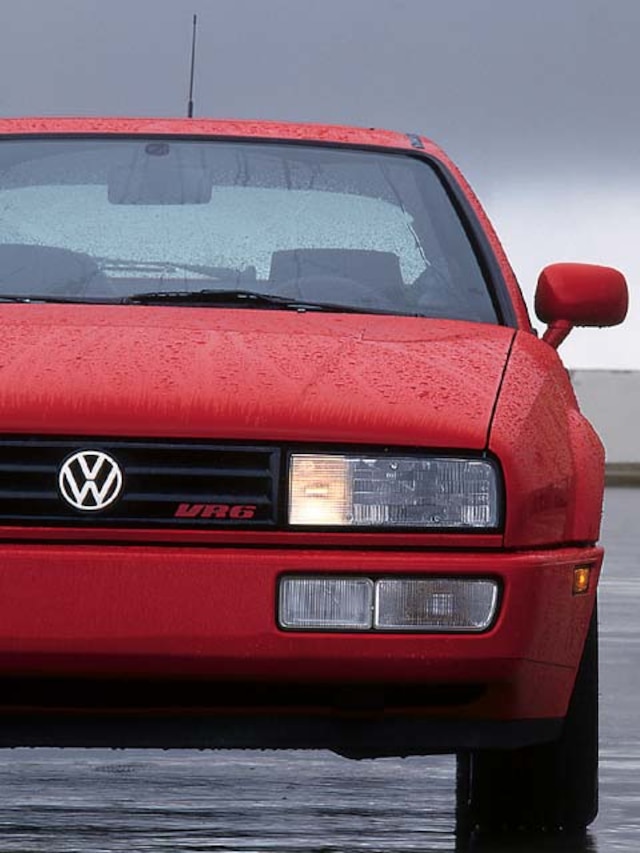 I have been brutally honest with all the aftermarket suppliers involved with this project--if the component compromises the Corrado's inherent goodness in any way, it's not going to stay there. I'd rather have 150 hp and a streetable suspension than a 300-hp monster sled that frightens fellow drivers

That said, the crew at Eurosport and GIAC cooked up a power program that delivered decent gains without sacrificing driveability. With just a few tweaks to the intake, parasitic drag, exhaust and software, Project Corrado SLC now makes considerably more power and does so with factory-like correctness. So far, so good. 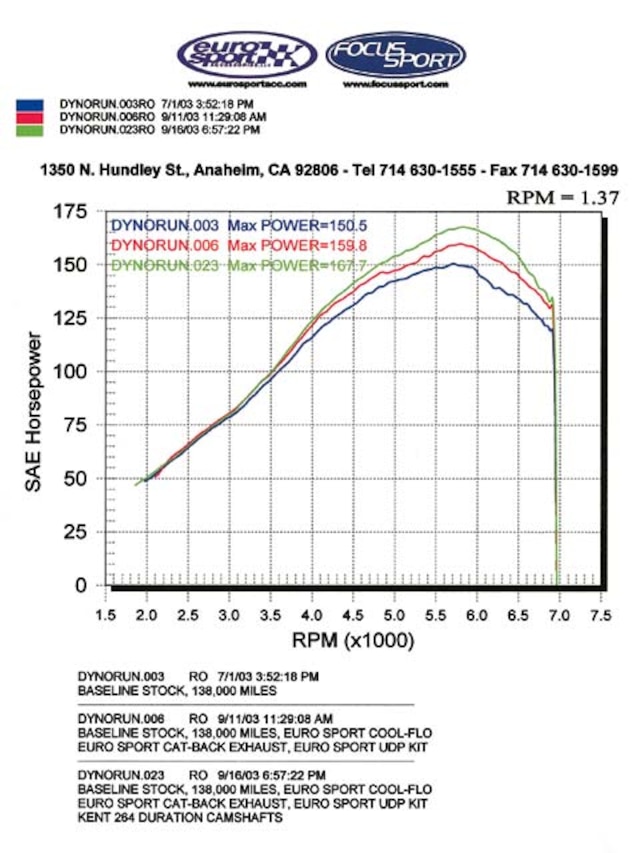 There were a few problems that needed to be addressed first, the most pressing of which were a leaky downpipe and a sub-standard exhaust and catalytic converter. The Corrado's downpipe is subjected to both intense heat and movement, factors that place it under considerable stress. Failures in the shielded flex-pipe and around the flanges are not uncommon--mine had leaks in both areas. The folks at FAST had a few VR6 downpipes on hand, and although priced around $150, are still bargains compared to new parts. I also needed a proper VR6 exhaust and catalyst to replace the constrictive aftermarket unit installed sometime during the Corrado's lifetime.

Although Eurosport's VR6 Corrado exhaust is no longer in its catalog, it still has the jigs to produce the system. Its Corrado VR6 unit has mandrel-bent 2.25-in. aluminized steel tubing and uses a center resonator and Eurosport's exclusive aluminized muffler, featuring a stainless-steel straight-through one-piece perforated core for smooth, unrestricted flow, lap-jointed all-weld construction, stainless-steel mesh packing and high-temperature acoustical absorbing material. The system also includes all the necessary hangers and hardware. There's also an optional high-temperature protective ceramic coating available that helps durability and heat reduction. Like all Euro Sport exhaust systems, it's guaranteed for 2 years. 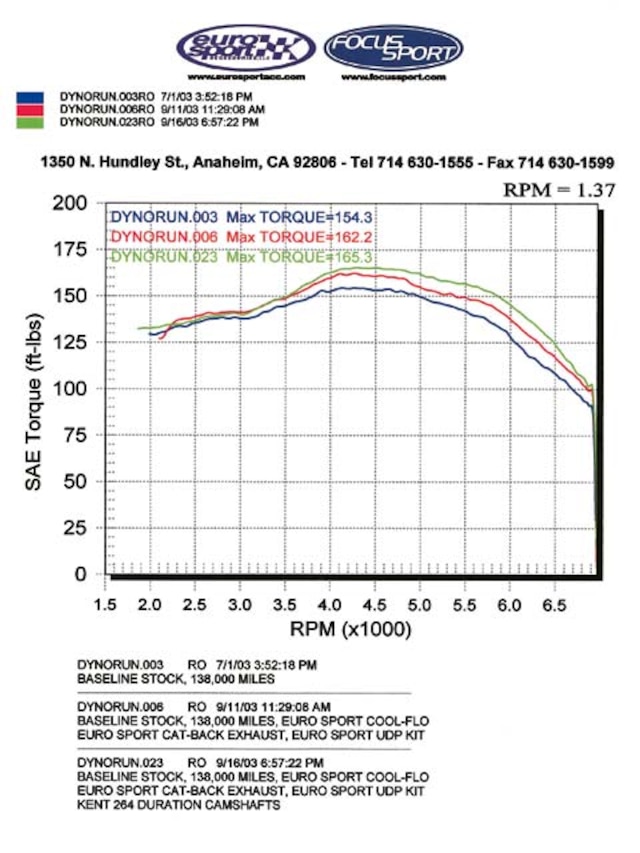 I chose a single exhaust tip from the MkIII and opted for the chain-reinforced hangers, which never break.

On the intake side, we installed a Eurosport Cool-Flo unit with oil-impregnated ITG filter. The Cool-Flo unit features a sizable sealed heat shield and is positioned forward and to the side of the engine, away from power-robbing heat. The Cool-Flo intake is beautifully built, featuring TIG welds, high-quality silicone hoses and a tough ceramic coating. The combination of Eurosport's intake and exhaust conspired to give the Corrado one of the finest voices in the automotive kingdom. I put it right up there with the flat-six of an aircooled 911 or a V8 Ferarri. Although tame at idle and at cruising speeds, the car produces a throaty roar under load--everyone who has driven the car is surprised at its tonality. It's a beautiful sound.

To reduce accessory drag, we fitted the car with Eurosport's newly developed underdrive crank pulley. Fabricated from a chunk of billet aluminum and anodized in a brilliant blue, the pulley helps the engine spool up quicker with a 13% underdrive ratio and a huge weight reduction. Whereas the stock unit weighed 112 oz, Eurosport's underdrive pulley weighs a paltry 14 oz. It doesn't take a rocket scientist to figure out the performance ramifications. Although a potential downside of the underdrive pulley is a fluctuation in rpm (especially on start-up or under an accessory load like A/C), the VR6 mill has maintained every bit of silky smoothness as before, only it's faster now.

The last part of the equation was a performance camshaft and modified GIAC software. I chose the Kent 264 cam for its superior idle and performance between 4200 rpm and redline. Kent produces cams in three states of trim: billet, chill cast or the less expensive factory re-grinds, which work just fine in street applications like Project Corrado.

I had run a Kent camshaft in Project GTI 16V and was very impressed with its streetability and power gains. The Kent 264 for the 12V VR6 did not disappoint. It's virtually impossible to tell it's even there until the engine reaches four grand and it comes into play with a nice, smooth power bump.

While ace wrench Vik Kazanjian was doing the install, he also replaced the hydraulic lifters and cam tensioner.

"Over time, the lifters become used to cams," said Vik. "It's a good idea to replace them when you replace camshafts to ensure a perfect match-up. Actually, you should replace lifters every 100,000 miles...it's a good way to keep the engine happy."

The software gurus at GIAC have several chips for the VR6 12V which increase both timing and fuel, ensuring the Kent cams receive a healthy diet. The GIAC also improves throttle response and driveability with factory-like smoothness. My Corrado's outstanding performance is a testament to its silicon savvy.

The performance of Project Corrado SLC has seen a marked increase. Although a VF Engineering supercharger will soon find its way beneath the hood, it's good to know the VR6 responds to these relatively simple bolt-on modifications.