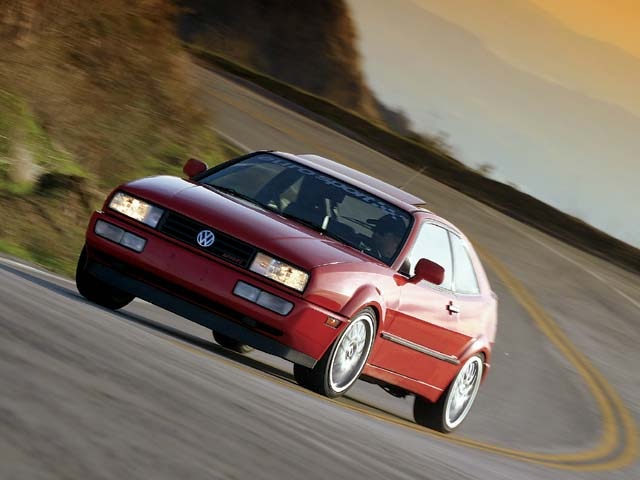 When the Corrado SLC was first introduced in the U.S., the general consensus was it was a great car--expensive, but very, very good. One journalist even went so far as to call it "one of the best front-wheel-drive cars ever."

Tell me something I don't know.

Despite its age and sizeable odometer numbers (138,889 at last count), the Corrado's handling and behavior remains exceptional. Maybe I just got lucky with this one. Maybe the crew that put it together had great sex that week. Or maybe it was just a great car from the start.

The years had taken a toll on the suspension, and while we fixed some of it with new bushings and mounts, the stock springs and shocks were tired. It was not too noticeable during day-to-day driving, but it became very apparent during spirited canyon runs that the underpinnings could not keep up with the engine. I was driving the car beyond the suspension's limits, and although fun, it was not desirable. Oh, yeah, the stock 15-in. BBS wheels shod with dead rubber did not help, either.

The Tire Rack had previously set me up with a set of SSR Competition wheels (7.5x17) and Kumho MX tires. It was an exceptional choice, performance-wise, anyway. I just was not happy with the look--while very light and strong, the SSR design was too modern for the car (in my opinion, anyway). I was looking for a wheel that emulated the factory's BBS units. Although there are many BBS replicas, none can quite match going straight to the source.

I met up with Joe Interrante, a marketing director for BBS Wheels in Texas during BMP's annual Charity BMW Roundup. (Despite its remote location, some 400 cars converged on Tyler, Texas, for what turned out to very fine day.) Joe is popular, not just because he's a good guy but also because BBS is a cornerstone in the automotive performance industry. People want BBS wheels because they are the best, with a stellar reputation earned on racetracks and roadways all over the world.

In keeping with the Corrado's understated appearance, Joe recommended the RX wheel, a model that has been in the BBS catalog for quite a while. Measuring 7.5x17 in., the RX tips the scale at 18.9 lb and features a tough silver paint and clearcoat that will most likely outlast the car. Although the rage today is ultra-lightweight forged wheels, BBS's casting techniques are damn near perfect, each wheel true to round and superbly balanced. Although the BBS RC in the same dimension weighs an even 17 lb, you pay for it. The RX is a great wheel for the money, and they look perfect on the car, like a special trim package from Volkswagen (think GTI 337).

In keeping with the value-to-dollar theme, I once again went to Kumho for tires. The Kumho MX may be the best-performing tire you can get for the money, designed to deliver high levels of "dry" road performance while maintaining good wet traction. The ECSTA MX molds an advanced silica tread rubber compound into a directional tread pattern that features sizeable, stable blocks to increase cornering traction and steering response, while four large circumferential and multiple directionally aligned lateral grooves help resist hydroplaning and enhance wet traction. Internally, the two, wide steel belts are reinforced by spirally wound nylon cap plies to provide excellent strength, uniform ride quality, and Y-speed rated (186 mph) capability, while the sidewalls are tuned to resist lateral deflection to provide handling control and feedback. The MX has very high limits, and when pushed beyond break away with smooth predictability and just the right amount of aural feedback. 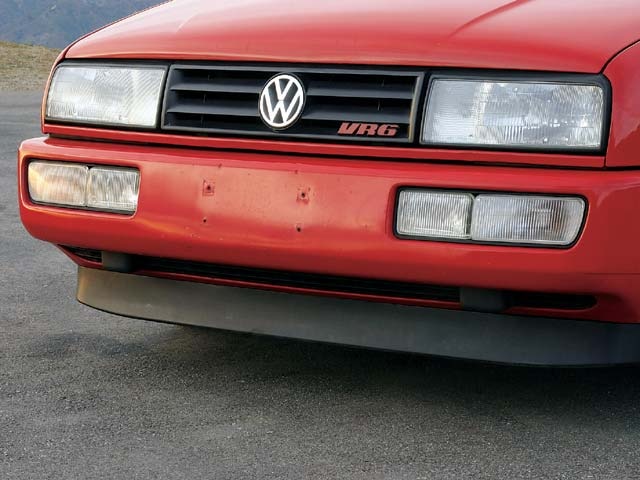 The ideal size for the Corrado is a 205/40-17, especially if you want to keep the speedometer happy with the same overall diameter. I accidentally ordered the wrong size, a 215/40-17, and while I am very happy with the car's performance, I'm usually going faster than indicated, and when the car is under extreme loads they tend to rub. I will probably refit with the 205s, but right now I'm having too much fun.

From the project's conception I had planned to use H&R coilovers, a strategy based on the success of Project GTI 16V. I chose H&R because I'm familiar with its products' superb build quality, ease of fitment and, most importantly, ride characteristics. The spring rates and shock valving are 25- to 30% stiffer than the factory suspension, which is exactly where I want the Corrado to be. Roland Graef of H&R once made the analogy of choosing a suspension like you would choose a bed. Most people like a firm mattress, neither too hard nor too soft. Although some folks like to sleep on boards or in hammocks, they remain a minority.

It's hard to believe the H&R coilovers are off-the-shelf items; I don't think I could custom select a better suspension. The Corrado's entire demeanor has changed. Where there was unrest, there is now control; where there was doubt, now reassurance. It's a Zen thing. Even engineering editor Barnes commented on the superb ride...and he hates everything. A bonus with the H&R coilovers is that the rear coils are much smaller than the stock units. Had I attempted to use the BBS wheels and MX tires with the stock suspension, I would have needed to run spacers to clear the rear springs and spring perches.

The stock brakes were in dire need of an overhaul, as evident by the 168-ft stopping distance from 60 to 0 mph. The original plan was to use Stoptech calipers and rotors up front, which would have given the binders capabilities far beyond the stock units. However, wheel choice became problematic; the Stoptech calipers call for quite a bit of offset and spoke clearance. It would have worked with the SSR wheels, but, well, you know the story.

EBC came into play with replacement rotors and its Green Stuff pads, which have been specifically formulated to meet tough EU standards for replacement pads, a none-too-easy feat given the strict European guidelines. EBC brake pads are the only pads made with Kevlar, and the pad compound uses no carbon, so there is minimal dust and what they do shed is lightly colored. The friction coefficient of the EBC compound is 30- to 40% higher than common pads, yet EBC claims rotor wear is minimal. The Green Stuff pads are designed for the street or light track activities with stable braking characteristics up to 550*C--pretty much what the Corrado will see. The EBC rotors appear to be well-cast units with grooves and multiple depressions on the face to increase surface area and bite. While a completely drilled rotor may have even more cooling capacity, they tend to live shorter lives, cracking after a few months of usage. Neuspeed provided the stainless -steel brake lines to replace the flex-prone rubber units.

Following the bedding-in procedure, we drove the car to "the road" and did a few shakedown runs. The EBC brakes did indeed give the Corrado improved braking, both cold and after repeated stops, and the pedal feel is hugely improved. Because of deadline constraints, we were unable to properly test the EBC brakes, but I would be surprised if they did not provide at least a 15- to 20% improvement over the stock binders.

For additional chassis rigidity, I went to Neuspeed for its triangulated rear tie. I had used one on the GTI and could feel the results instantly. Older cars tend to respond better to aftermarket chassis tie bars, as their construction is not as tough as modern techniques provide. Like all products Neuspeed fabricates, its rear tie bar is a work of art, featuring a jewel-like finish, high-quality fasteners and easy-to-follow instructions. The Neuspeed rear tie bar made its presence known immediately, silencing an annoying rattle out back. Where it really shines is in high-speed corners--one in particular comes to mind. It's a long right-hander with two dips midway through. If I do it just right, I can carry 88 mph before hard braking. Before the Neuspeed bar, the Corrado would hit the first dip and tend to walk to the outside, just in time to hit the next dip. Now it remains totally flat--I don't even hit the second dip.

The last item added/replaced on Project Corrado was the front spoiler. The stock unit was replaced with a European-spec spoiler courtesy of Mike Potter at Virtual World Parts. The European spoiler is twice the size of the stock unit and is a direct replacement piece. It looks awesome and is supple enough to take a serious beating.

Project Corrado is shaping up to be a wonderful car. In all honesty, it wasn't that difficult...it was a great car from the start.

European Car
Your Guide to a Proper Shaved and Tucked Bay
There's no right or wrong plan when it comes to cleaning up your engine bay but there are all kinds of wrong ways of going about doing it.
Aaron Bonk – Mar 31, 2020