Searching for reliability under the hood

To recap from Parts 21 and 22, the M3 went in for a fresh cylinder head, and instead it ended up with a whole bunch of problems that left the car in the shop for months. To make a long story short, the head stud threads were pulling out of the block when buttoning down the cylinder head. We added Time-Serts, but those didn't hold, either. Eventually, evosport shop manager Gary Karamikian suggested using Keen-Serts, which he said hold stud torque much better. Thankfully, they worked.

To avoid waiting countless days for BMP to receive its next shipment of gaskets, evosport attempted using the stock head gasket on my car. Of course, that didn't work well, either. As soon as the car was boosted the first time, Project M3 had all the symptoms of a leaky gasket, including nearly overheating, visible water in the spark plug holes, and lots of puffs of white smoke under load. Water also kills turbo bearings, so that unit got rebuilt by Performance Techniques once again.

Now we were back to square one. The cylinder head was yet again rebuilt by evosport so that we could get a fresh start. The slight change to the cylinder head this time involved some machine work to clearance the cam trays. Bolting on this head with larger head studs requires proper heat cycles and re-torque procedures, which include pulling off the cam tower to re-torque the head. Unfortunately, with bigger head studs, the cams have to come off again in order to get a socket on the studs. The machine work done to the head now allows a socket to reach the head stud without pulling out the cams, saving several extra hours of costly work when re-torquing the head.

As previously noted, I had a newly rebuilt turbocharger, and all I needed was a good head gasket. We still weren't sure if rebuilding the cylinder head and turbo would take care of the oil consumption problem I've been trying to have fixed since day one with this 3.2L engine. Right before the cylinder head reinstallment, the guys at evosport and I decided that the best thing to do in order to quit chasing our tails was to replace the piston rings, just in case. Recent leakdown tests showed no more than a 1- to 1.5% leakdown, but that could tell us only part of the story--there wasn't a good way to see if the second piston rings or the oil-control rings were keeping the oil away from the combustion chambers.

According to evosport, the previous rings were installed with such tight clearances that pulling the pistons was a very hard job. I ordered a set of conventional rings this time from Total Seal. We felt these might be better than running gapless, in this case by alleviating any possible suction of oil into the combustion chambers with a little blow-by. The only downside is that the compression numbers and leakdown tests might not be as impressive.

To do this job with the cylinder head already off is an estimated 10 hours extra work for O.E. piston ring applications. evosport states that once aftermarket rings come into the equation, the time can vary depending on how much time is needed to fashion the ring-end gap. OEM rings usually don't require having to clearance them. In my case, however, evosport had to grind the Total Seal rings down more than expected in order to fit the pistons.

In hopes of a better seal, I decided to test evosport's new high-performance head gasket for the E36. This multi-layer metal gasket had already been proven on a couple of forced-induction motors evosport recently put together, and the technology is the same as in the head gaskets for the new AMG cars and BMW M3s. The four-layer design measured 1.8mm in thickness and the five-layer 2.0mm. I went with the latter for that little bit of extra volume in the combustion chamber. With the head gasket and cylinder head in place, each ARP stud was gradually twisted to 70 lb-ft of torque with ARP lube. To this day, it's held.

One of the last-minute changes included swapping in Denso Iridium sparkplugs and powdercoating the cam cover. The plugs were ordered from Sparkplugs.com, where you can order nearly any sparkplug you're looking for at affordable prices. I had seen these plugs make power on our Project MINI Cooper S (see ec Jan. '04), so I wanted to try them on Project M3. evosport had the cam cover powdercoated, which really cleaned up the look of the engine bay. The 1995 M3 cam covers get discolored easily, and I wanted to go with the dark look of the newer factory 3.2 liters.

Something to keep in mind about the cost to remove and reinstall a cylinder head on a turbo M3: It costs more than doing it on a normally aspirated car. First of all, the exhaust manifold goes on the head before the head goes on the engine, requiring two sets of hands to set it on the block. Second, turbocharged vehicles have considerably more piping on both the intake and exhaust side, and don't forget there's a turbocharger with its own water and oil lines that needs to be reinstalled, too. The book time to remove and replace a cylinder head, according to evosport, is about 15 hours for a non-turbocharged vehicle. However, this can also vary a bit with the condition of the motor--you want to clean any oil-caked parts before reinstallation.

These are just some of the things to consider if you're contemplating having your head pulled. Additionally, if you're ever planning to have your piston rings replaced, make sure all pertinent info is gathered from the ring manufacturer and engine builder, including accurate gaps, bore, stroke, compression and the type of induction.

Once evosport technician Ken Bright finished the motor, he heat-cycled it and re-torqued the head. Ken then broke in the rings with a series of different rpm and throttle loads at very low boost over the next 150 miles, a procedure I continued with over the course of the next several hundred miles before returning to the shop's dyno.

I could already tell that the motor felt stout. The torque off boost felt strong--as good as stock if not better. Second, things were better in the EGT department. Sure, my SPA Technique EGT gauge is reading after the turbo, but the lower temps and reduced time it takes to cool those gasses down tell me that turbo-bearing life should be prolonged significantly. On the street, my peak recall temps were not exceeding 1,200*F, and driving around town the car kept to a relatively cooler 1,000*F or less. I attribute these readings to what was done to the car last time in Part 22 (see ec 05/04), which was water-jacketing the turbo. In addition, Extrude Hoe's smoothing process was performed on the exhaust manifold and we also clipped the fins of the turbine wheel about 10 degrees.

As you can see by the picture of the engine compartment, the intake manifold is no longer heat shielded. I took it off because from here on out I won't be putting the M3 through the stresses of the racetrack, and I wanted to clean up the looks of the engine compartment. Unfortunately, I did notice my intake temperatures inside the manifold have gone up 30- to 40*F since removing the heat shield in between the block and intake manifold, as well as the sticky heat wrapping that once engulfed my intake manifold.

After accruing nearly 700 miles on the new motor, I brought the car back to the shop for some dyno testing in hopes of seeing some light at the end of the tunnel. Sure enough, with the original 3.0L cylinder head, low-end torque was right on par with stock-compression 3.2-liter E36s. An initial pass with the boost controller turned off--about 6- to 7 psi---was already a tick under 300 whp, up around 10 whp from before. Another third-gear pass at 8- to 9 psi had us well over the 320 mark. The testing was cut short at 14 psi, however, due to a lean air-fuel mixture. It seems that by reducing the backpressure, Extrude Honing the exhaust and clipping the turbine wheel, more air is getting through the motor but the fuel isn't matching it. I cut the tests short for the night but not without seeing a few blasts over 380 whp.

The motor was looking good. Just to make sure, I pulled the plugs and looked inside--the pistons were dry (what a relief!).

Until I get the software sorted out, I'll be sticking with 9-psi boost levels just to be on the safe side. In the meantime, I'll be looking to get the air-fuel mixtures sorted out. Don't be surprised if we end up discarding the Bosch ECU altogether for next time. Stay tuned. 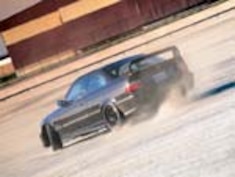