Don't get me wrong. I really do like this car--maybe even more than I liked our long-term 9-3 Aero. However, based on the following myriad critiques of ec's newest project car, you'd think I hated this latest addition to the Saab family--not true. But since Saab gave us this little gem to do with as we please, my engineering side kicked in and, like all engineers, I have this strange delusion that I can make this car better.

If you haven't already heard, the 9-2X is manufactured by Fuji Heavy Industries on the same production line as the Subaru WRX. Call it a Saabaru, if you want, as there's no point in hiding that. It even has the manufacturer's identification badge stamped in Japanese in the engine bay. To save costs and quickly bring an entry-level product to market, Saab worked out a deal with Fuji Heavy Industries, through GM, to redesign the 2004 Impreza Wagon as the new Saab 9-2X. Saab engineers did their best to inject some Scandinavian blood into this Japanese thoroughbred, which resulted in a fantastic driver's machine with great looks. This union turned out to be a blessing as the 9-2X is distinctly Saab but also features the raw driving experience of a Japanese awd, turbocharged boxer platform. Limitless aftermarket performance parts already exist for this car. Its looks make the 9-2X stand out, often as the envy of WRX and Avante owners alike. We're going to take the road less traveled and not only make our car perform, but also send it through finishing school for an added bit of refinement.

We'll start off by looking at the 9-2X and determining what we like and would like to change. Instead of just trying to make a track beast out of this car outright, Project 9-2X will get all the amenities to make it a mean Euro street cruiser with performance and comfort. After that, we'll strap on the heavy-hitting parts, throwing comfort and practicality out the door, and see what we can accomplish with this platform without having to tear into the engine's internals.

Aside from the external cosmetic differences between a 9-2X and a WRX wagon, there are added interior features, including a sunroof, automatic climate control, additional sound insulation and heated leather seats, all of which up the level of sophistication to that of any European car. Most of these appointments fit the bill while a few make it feel more like a better-dressed WRX.

The 9-2X's main mechanical changes occurred with the Saab-specific suspension tuning. Suspension damping is altered accordingly to Aero, Linear or base models. The Aero model we have is tuned with 10- and 20% less compression damping in the front and rear, respectively. Rebound damping was increased by 5% in the front and reduced by 5% in the rear over the WRX wagon's stock suspension.

The drawback from the reduced compression damping is the added amount of pitch and roll in hard maneuvers, which is somewhat similar to how the 9-3 and 9-5 drive. But this is easily compensated for, you just need to get used to letting the car lean into a turn more.

The WRX STi's tighter 15:1 steering gear ratio and stiffened steering assembly are also used on the Aero model. Turn-in is extremely fast and responsive though a little more steering resistance would add to the driving sensation. All 9-2Xs feature aluminum rear lower control arms and stiffer wishbone bushings to help the car's on-center and high-speed feel.

All this is great, but the nature of the 9-2X makes it fundamentally different from the other Saabs. There are few electronic aids or buffers to filter the inputs and responses from the car. What you put in is what you get. As a result, this car is more about performance and corner carving than cruising the highway.

Out of the box, the 9-2X also has some really frustrating characteristics. Boost response and ECU tuning make it really hesitant from a leisurely launch. The car bogs down when slipping out the clutch at anything shy of 3000 rpm.

To keep the car clean (i.e., pass U.S. emissions requirements), the air/fuel ratio is kept at 14.7 or stoichiometric at lower rpm--even when the throttle is completely open. Normally, cars run rich when you "get on" the throttle. The 9-2X doesn't do this until well after 3000 rpm and 50% throttle. Once it passes the threshold, though, get ready for "Mad Max"-style forced-induction mode. The trick is to stay high in the revs. Luckily this response lag can be easily tuned out--as you'll soon see.

Gripe number two: Brake-pedal feel is really sloppy. Not only is it soft, but the feel is not very progressive, which makes controlling moderate weight transfers a very fine operation. But fear not, we already have plans for that.

The seats are also a bit frustrating. Though pretty, there's just not enough bucket in them. For a car with so much cornering grip, the front seats give very limited lateral support. This can be easily taken care of. Matching the two-tone leather will be the hard part.

The final gripe is the shifter and gearbox. Any WRX owner already knows about the long throws and slop in the shift lever. Not only is it notchy to get into gear, but once in gear, there is still plenty of play. This shift mechanism is definitely more Japanese than European. It lacks the springiness in its neutral position that European cars are known for. Getting into reverse usually requires several attempts and sometimes double clutching.

As with any new car purchase, the first avenue of modification and improvement is through the dealer. Saab offers a line of dealer-option parts that can be installed on the spot. Some are cosmetic, some functional and some are purely business. Saab of Santa Ana, Calif., performed all of our installations in about half a day.

Inside, we added a rear-seat cupholder, a raised armrest console for extra storage, polished doorsill plates, a weighted MOMO shift knob, a rear storage tray in the spare tire well and a center-dash three-gauge console. All of these items bring the 9-2X closer to its more luxurious Euro cruiser rivals.

The gauge cluster is probably the best part of this package and includes vacuum/boost, voltage and coolant temperature gauges. Boost and vacuum is on a mega Pascal (Mpa) scale, and coolant temperature is in Celsius. (Hooray for metric.) These are drastic improvements over non-labeled boost and temperature gauges that mean absolutely nothing and are just wasted space on a gauge cluster. The packaging is ideally European, with small gauges on the center of the dash instead of monster 5-in. diameter pods mounted on the A-pillar.

The raised armrest is great for added storage, but seems a little unfitting for the 9-2X. Unfitting because it's strategically placed so my elbow bashes into it every time I shift into second or fourth. If you always perform grandma shifts and have short forearms, this might be for you, but storage for trash and things that shouldn't be in a car anyway isn't on my wish list.

On the outside, Saab installed the sunroof wind deflector. Kind of cool, but useless for us non-smokers here at ec. I think of it as added drag. A Saab optional exhaust was also installed. Though it didn't make much difference in sound or performance, the tip really caught many enthusiasts' eyes who were surprised to find out it was a part offered by Saab.

What did make a noticeable difference was the factory short shifter. The entire shift lever, base and rod assembly were replaced--unlike some aftermarket short shifters that only replace the lever. The shorter throw and reduced slop really did help in performance driving. With the added weight and feel of the MOMO knob, the overall action felt more fluid. Everything was proportionately reduced in terms of play and throw, but the effort required also increased. A set of stiffer bushings might further reduce the play in the lever. Reverse is now the worst to get into.

In its stock form, we put our Saab through the paces with performance, acceleration and braking tests. We also dynoed the car for an accurate baseline for future power modifications. Though performance numbers for the WRX or 9-2X have been thoroughly documented, we wanted to get car-specific numbers for future comparisons. As it turns out, since the car was a pre-production press car, it posted 16 more whp than the average stock 2004 WRX and had certain alignment issues that affected the skidpad numbers. Overall, we are quite happy with our new toy.

The 9-2X is a great project car platform. It's the black sheep of the family, rough around the edges, faster than the rest, but definitely carries the family traits. There's room for improvement, but the basic architecture for a great car is definitely present.

If you're turned off by the notion of this unholy union of Japanese engineering and European beauty, don't bother to follow this series. But don't be surprised next time when one of these cars fly by you with 300 whp on stock internals. Which is exactly where we're headed.

Next time, we cover the basic interior goodies to bring the runt up to par in terms of driving aids and amenities. 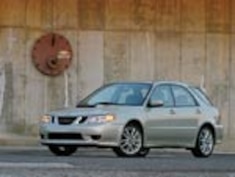 In part two of this 2004 Saab 9-2X project car series, we add mobile electronics and an gps navigation system. 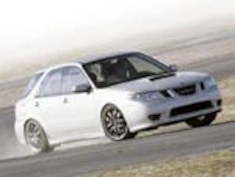 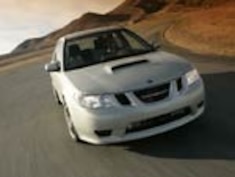