Race-ready Golf Part 4: Where did I go wrong? 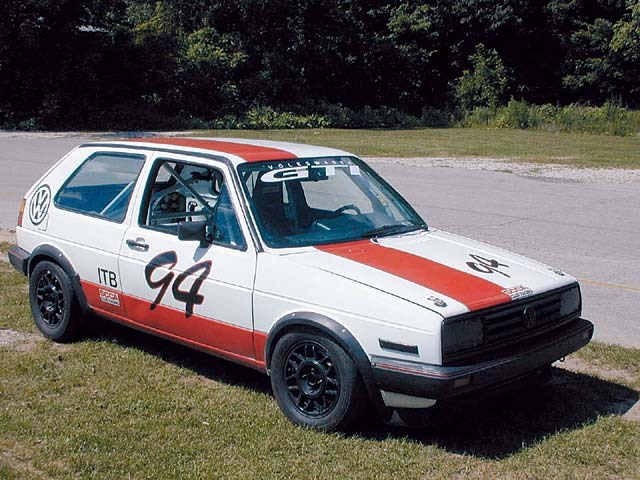 Racers have an old saying, "A bad day racing still beats a good day at work." After my last two outings with Project Race-ready Golf, I'm not so sure about that. Recall that my engine expired in a big way early in the season at a Sports Car Club of America (SCCA) Regional race at Indianapolis Raceway Park (IRP). Faced with a number of choices to get back on the track, I took the cheapest way out by installing a $150 junkyard motor in my stricken race car. At the time, it seemed like a good option, allowing me to get the car back on the track and in competition. I knew there were risks, but I figured at least the car would be mobile again. I seem to have forgotten that often you get what you pay for.

SCCA at Road America
Road America, in Elkhart Lake, Wis., is a real driver's track. One lap covers 4.046 twisting and turning miles over the Kettle Moraine countryside. The track is dominated by long straights and fast corners that severely test an engine's power and its ability to sustain a wide-open throttle. Unfortunately, this characteristic of Road America immediately exposed the flaw in my racing-on-the-cheap theory. My junkyard motor was junk. At racing speed the blow-by past the piston rings was so great that in three or four laps it would push a full quart of oil into the catch tank.

As the engine warmed up the oil pressure fell from a healthy 75 psi to a pathetic 40 psi at 5000 rpm. At idle the gauge flicked around the 20-psi mark and the low oil-pressure warning light flickered in corners. Not good, especially at a track where so much of the time was spent at high rpm. Okay, maybe I could live with low oil pressure and an oil-soaked engine bay, but the car was slow. Really slow. Pathetically slow. I qualified at the very back of the grid and tried to stay out of everyone's way. Even on this long circuit, I was lapped by the Improved Touring B class leader on the last lap of the race. I finished, but that was the best that could be said for the entire day's racing.

What to Do?
With another SCCA regional race at Blackhawk Farms just a couple weeks away, I tried to think of what I could do to improve on my admittedly bad situation. The SCCA has a rule that you must finish at least two regional races every year in order to keep your SCCA regional racing license current. By soldiering around the track in a sick car at Road America, I had finished one race and therefore had half of that requirement out of the way. I knew that the next phase of my Race Ready Golf--building an all-new motor using new parts--would take enough time to put the rest of the race season in doubt. So if I could just drive around the track at Blackhawk, stay out of trouble and finish the race, I at least could salvage my regional license for next season. Hey, at least I had a plan.

To improve my odds, I pulled the oil pan and did a quickie replacement of the connecting rod bearings. This can be done without removing the cylinder head in an easy afternoon. In theory, you should also replace the connecting rod bolts when you do this. Tightening the bolts to their proper torque results in a small amount of permanent stretch so they shouldn't be reused, but I was desperate. I buttoned everything up, put the car on the trailer and headed to Blackhawk Farms.

SCCA Regional Race at Blackhawk Farms
At least the weather was nice. Blackhawk Farms near South Beloit, Ill., is very different in character from Road America. The 1.95-mile circuit is tight and twisty and the straightaways are so short you barely have time to relax before you are setting up for the next corner. Because this is a handling track, the first practice session was fun, even if the oil pressure still read dangerously low. So much for new rod bearings. 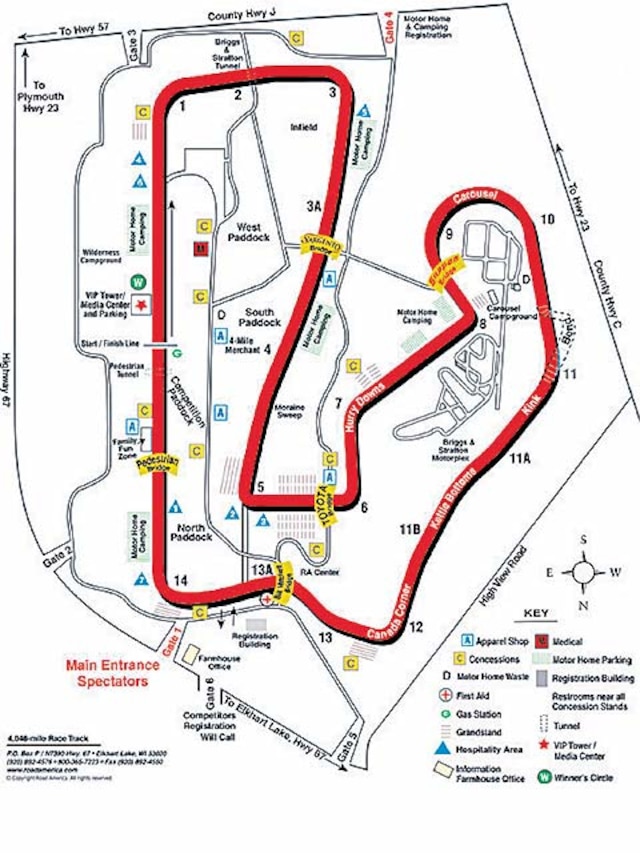 My ITB Golf handles well and is easy to drive, especially when it is so woefully down on horsepower. My times were slow and even a brief practice session once again filled my catch tank with oil. Not a good omen. Qualifying was next and I decided that if I didn't have much of an engine, at least I could brake deeper into corners and work on getting the car through the bends a bit faster. This was working pretty well, and was actually kind of fun until the fifth lap.

Coming into the last corner on the circuit, braking hard in traffic, I suddenly heard a BANG and the brake pedal immediately went to the floor. I had been at the top of fourth gear just before braking, maybe 70 to 80 mph, and now I had no brakes as my turn-in point for the corner quickly passed by. I looked ahead and saw perhaps 100 feet of runoff room on the outside of the corner bordered by a wall of high grass. I had a split-second to make a decision. For an instant I cursed the car's previous owner for removing the emergency brake lever, claiming he was saving weight. Too late to worry about that now.

Do I try to turn and maybe spin the car, perhaps saving it but more likely initiating a rollover? Or should I plow straight into the unknowns that might lie in the tall grass? I chose the straight-ahead option and braced myself, hoping the tall grass didn't hide a tall embankment or a bunch of tree stumps. The grass was well over the roof of my car and quickly swallowed my VW. I was still pumping hard on the brake pedal, but it was the grass that was gradually slowing the car.

Finally, the car came to rest and I had the presence of mind to push in the clutch and keep the engine running. Hmmm. Completely surrounded by tall grass, I was a bit disoriented. Then, in my rear view mirror, I saw the tunnel of mowed grass I had just created during my spectacular entry. I selected reverse gear and slowly backed the car out of the same hole it had made going in. 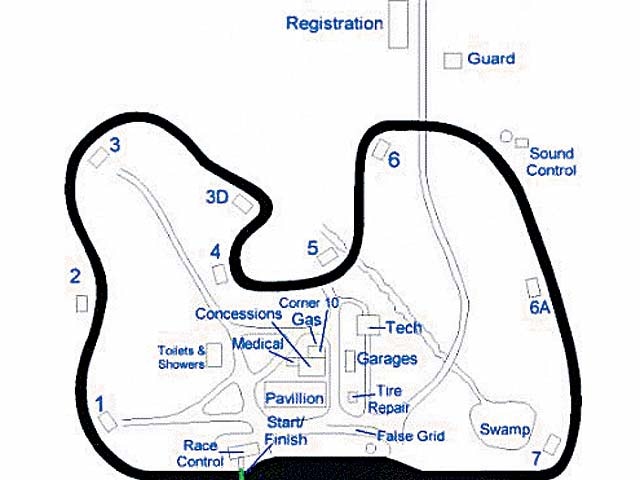 Much to the surprise of the concerned corner workers who had seen me disappear into the scenery, I suddenly popped out at the edge of the track. I put the car in first and carefully crossed the track to the back entrance to the pit lane, crossed straight across the paddock and bumped my car into my trailer to get it to stop. It had been a ride.

Trackside Repair
A quick inspection showed the braided stainless-steel brake hose on the right front wheel had failed, spraying brake fluid all over the wheelwell. One reason that people replace standard rubber brake hoses with the braided steel variety is because they are supposed to be more reliable and robust. The hose showed no sign of damage, other than the rupture in its center. Perhaps I had kinked the hose when working on the engine change or maybe it had a manufacturing defect, there seemed no way to know for sure.

But if I didn't make the race in 2 hours, my regional license would be in jeopardy. Once again, the choice of a VW Golf as a race car came to my rescue. I jumped into my tow vehicle, went into town and found a nearby auto parts chain store that had a standard rubber brake hose for my VW. Back at the track it didn't take long to install the new hose and get a nearby racer to help bleed the brakes. My sick little Golf was back in business. 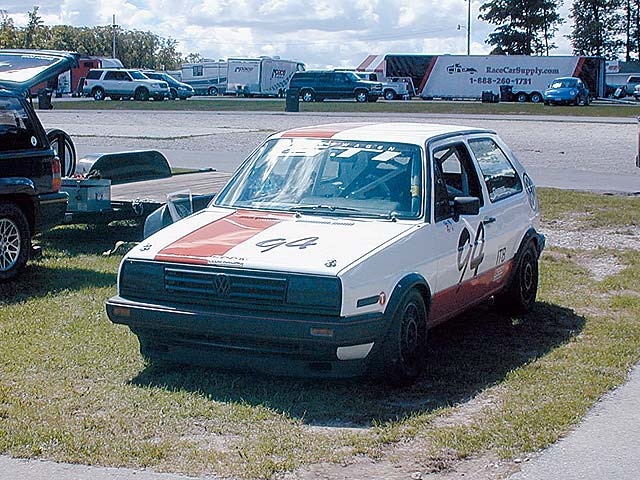 I Vow...
After all of that drama, the race was an anticlimax. I soldiered around in last place, keeping an eye on the rapidly dropping oil pressure gauge and wondering what other calamities would befall me. None did and I wheeled the car onto the trailer and left in disgust within 45 minutes after my race, vowing not to race the car again until I sorted out its engine maladies.

At A Glance:
Installers
Kevin Clemens

Race-ready Golf Part 4: Where did I go wrong?
Photo / 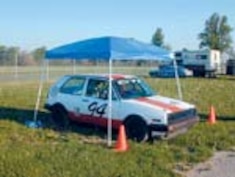