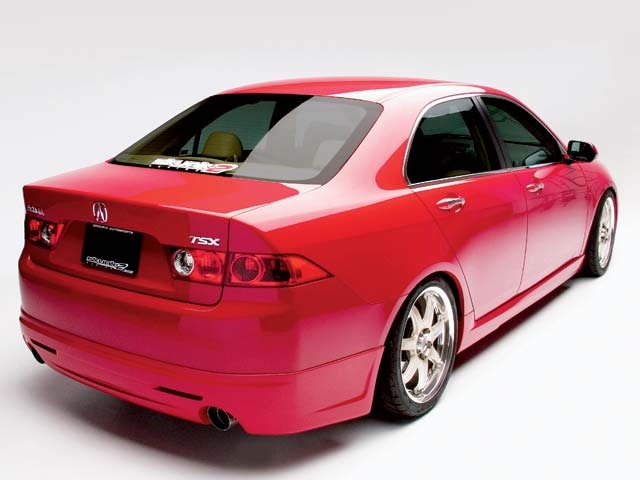 Project TSX's aim is simple, but by no means easy: beat an M3. Trounce the Teuton with well-planned bolt-ons. Best the Kraut in handling, braking, acceleration and even styling.

In the first installment, Skunk2 screwed on its own adjustable coil-overs and short shifter, installed massive Brembos and fitted the car with 18-inch three-piece Volk wheels and BFG g-Force KD tires. The results of said footwork were great, producing handling numbers more or less on par with an M3.

It's time to motor and play dress up. In stock form, the TSX gets the best possible K-series engine combo, combining the large 2.4-liter bottom end also found in the CR-V (but with better rods) and the i-VTEC head as found in the Acura RSX Type-S. Skunk2 has probably put K-series engines through as many engine dyno pulls as anyone and knows the engine platform well. 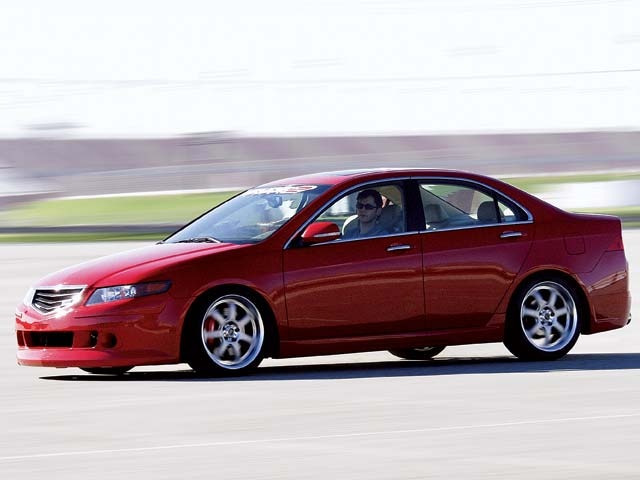 Project TSX's stock acceleration numbers were nothing to be ashamed of, but nothing to toast to either: 15.9 seconds at 88.6 mph in the quarter mile, with a 0-to-60 time of 8.1 seconds. Project TSX started life as a press car for Acura. When Skunk2 removed the car's computer, its techs noticed it was a preproduction ECU. When Skunk2 started working on the project, Hondata had yet to come out with its K-Pro programmable ECU for the TSX, so Skunk2 rewired the car to use a K-Pro from an RSX Type-S for duty on the K24.

The TSX's engine tune from the factory is quite conservative, so Skunk2 was able to extract healthy horsepower gains across the powerband. Changes were made to intake cam timing by controlling i-VTEC, but for now, cams remain stock. Timing and fueling maps were both modified. Power was more easily extracted by modifying the fuel curve so Skunk2 focused its efforts on this part of the calibration.

The rev limit was set at 7500 rpm because, although additional horsepower could be gained by spinning the engine to 8000 rpm, big revs in combination with the K24's long, 4-inch stroke can do unkind things to rod bearings. The current ECU tune is described as "mild" to be compatible with California bilge water. 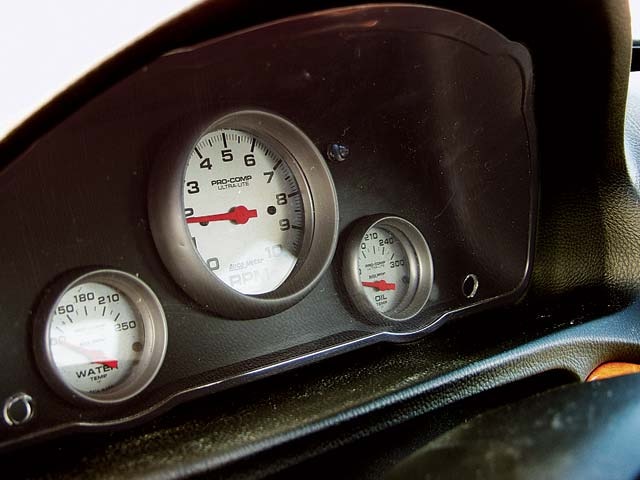 Skunk2 realized surprising horsepower gains during development of its TSX header: 9 hp with the stock cat in place. Manufactured from 304 stainless materials, the Tri-Y design uses merged collectors and features one step in diameter in the primaries. Skunk2 is also considering a race header for the TSX that deletes the catalytic converter.

Skunk2 uses the same 304 stainless material used in the headers for the exhaust. The midpipe is made from large 70mm diameter tubing coupled to dual 60mm outlets feeding into N1-style straight-through mufflers with 4-inch tips. During development, a very slight increase in horsepower was seen using slightly smaller diameter tubing, but the larger tubing will pay dividends in better power production when coupled with future modifications.

The exhaust note is aggressive and progressive. The beautifully fabricated exhaust features N1 canisters, so the aural products of combustion are fairly unfettered by the straight-through design. This exhaust system will probably best be appreciated by the younger set or by those who relish a sporty tone.

The exhaust note features prominently under any amount of acceleration or deceleration, but is well-behaved when cruising at freeway speeds. Take full advantage of the 7500-rpm redline, and all 2400cc of displacement occupies your eardrums; this will happen often, as Project TSX delivers a big wallop of grunt after the 6000-rpm cam changeover. One of our largest complaints with the stock TSX is the engine sounds thrashy, even agrarian at high rpm; now it sounds neither.

Skunk2 fitted a prototype intake system of fairly orthodox "short ram" style design, with a filter at the end of the aluminum tube. The intake lets itself be heard, especially when the engine is in VTEC. Skunk2 also installed a prototype grounding kit, which it found to be worth a couple of horsepower. Ground wire kits are one of the few very "miracle power" products that can actually work, especially on turbocharged cars or vehicles with large electrical demands.

With the combination of a custom-tune Hondata K-Pro ECU, Skunk2 intake, header, exhaust and grounding system-all bolt-ons that install in a couple of hours-Project TSX produced a peak horsepower figure of 184 at 6100 rpm and 162 lb-ft of torque at 5800 rpm on our Dynojet.

There are three runs on the dyno chart. The blue lines represent the baseline numbers put down by the preproduction Skunk2 car. The black lines are from a stock TSX from Acura's press fleet we tested early after the car's release, which may also have been a preproduction car. The red lines denote the Skunk2 car with the parts listed here.

Photo 6/9   |   Skunk2's prototype intake moves the filter as far as possible from the engine's hot bits.

There is a disparity between the baseline on the Skunk2 car and the press fleet car we tested. It is not unheard of for "hot" cars to be in press fleets. It is also not unheard of that former press cars like Project TSX have had the snot beaten out of them by cruel-hearted journalists like us, which can cause permanent deficits in power production. Our guess is that numbers from a production TSX lie somewhere between the two "stock" graphs.

Photo 7/9   |   Stainless tubing and cans are meticulously TIG welded to produce a quality exhaust with a mean tone.

Regardless of the peak numbers as modified, Project TSX makes serious power under the curve, where it counts. Above 5200 rpm, the TSX's power production simply soars, making as much as 30-wheel hp more than stock. Skunk2 plans to sell a complete tuning package-a solution that provides the consumer a known and proven quantity.

There's still a long way to go before the TSX can match an M3 in a straight line, but luckily, Skunk2 still has more firepower to throw at it. Dave Hsu, owner of Skunk2, believes there's plenty of power to be made with a set of street-grind cams, which Skunk2 currently has in development. And, depending on your definition of the word streetable, a lot more power can be had with more aggressive cams-more like those Skunk2 uses on its racecars.

You may notice Project TSX looks a bit more menacing since the first time you saw it. A Ken Style-style one-off fiberglass body kit, procured from a company that shall remain nameless, was painted to match. There are fitment issues with the genuine Ken Style JDM Accord body kit when fitted to the USDM TSX, so another solution was sought, which yielded a good-looking result that came packaged with bad service. If you like the look, we suggest buying the genuine kit and having it modified to fit by a reputable body shop.

Photo 8/9   |   Skunk2's stainless-steel header uses a Tri-Y design with a step in the primaries; Skunk2 claims 9 hp from just this mod.

The new front bumper continues the Acura DNA while adding a deep air dam. The side skirts are full and low, accentuating the lowered stance of the car and large wheels. The rear bumper maintains the low-slung appearance carried by the side sills and incorporates more vertical area. Project TSX simply looks bad-ass. The addition of the body kit makes the 18-inch Volk wheels look even larger and the polished lip even deeper. Eyes glued to our red sled belong to enthusiasts and heretics alike, and span the economic and sociological spectrum. It seems we outfloss the preppy German in our new threads.

Looking the part is great, but the SCC credo places substance first. As is often the case when horsepower and torque are increased everywhere, and in a linear fashion, Project TSX doesn't feel hugely faster. All that matters is that it is, as evidenced by the acceleration numbers.

The most noticeable change is in VTEC, where even the wide, sticky BFGs fight for traction in the lower gears, and the steering wheel does its best to wrench from your grasp. More importantly, the driving experience has changed from a nimble, grip-generating machine in need of an engine to a balanced driving package.

Where do we stand in relation to the M3? We're still 1.5 seconds and 10 mph behind in the quarter mile, no small deficit. We need more power, and Skunk2 is confident it can deliver. We're competitive in the stick and stop categories, but tweaks like the installation of a limited-slip differential, rear anti-roll bar and rear brake pads should give us a forged Katana to best Wusthoff steel in combat. 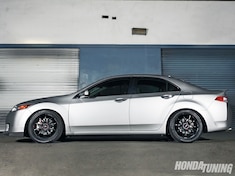 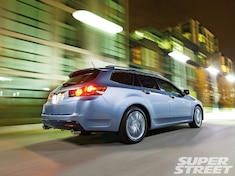 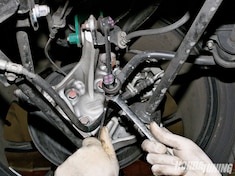 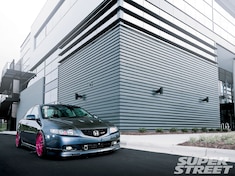 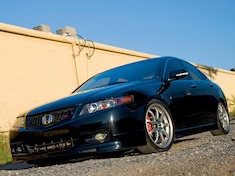