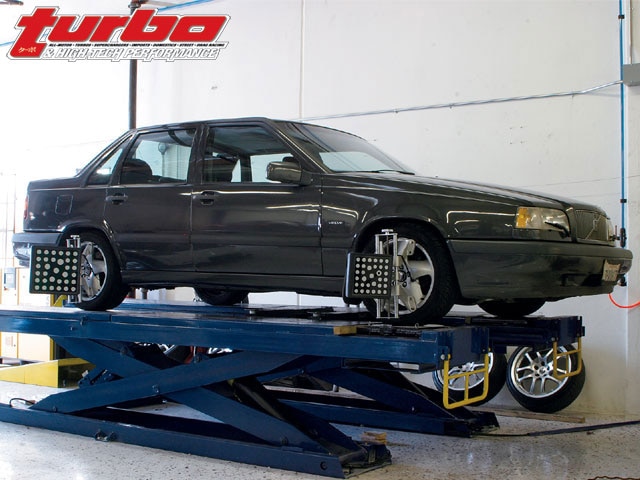 Since our last installment Project Brickyard has undergone some long overdue maintenance. We have to remember that this Swedish beauty is 14 years old after all. When dealing with worn parts, however, it creates the opportunity for you to buy aftermarket performance upgrades. Even better is that often times the aftermarket products are both better and cheaper than their OEM counterparts. With that tenet in mind we went shopping and bought our toboggan some needed supplies.

As you may recall from our last update the rear main seal was replaced, which was a rather involved endeavor. Other parts that have worn out their welcome were the brakes and suspension. As with most 850 Turbos the top hats on the front and rear suspensions often deteriorate causing the hats to fall apart into two pieces. If you start to hear a "clunking" sound each time you go over a large bump or pothole it is probably time to replace the hat. It's also probably a good idea to change all the hats at once because if it isn't broken it probably will be soon. We opted to change ours out when we installed new H&R lowering springs and Bilstein shocks on the vehicle.

Having done some research on the net we knew there were plenty of different big-brake upgrades available for the vehicle. Although it was extremely tempting to have a set installed on the Volvo, do you really need 13-inch rotors and four-pistons calipers on a four-door family car? I guess it's not about a need issue, it's more of a want. We do, however, plan on upgrading to the larger S/V70 302mm rotors in the future. The great thing about the conversion is the use of all factory Volvo parts so there's a less likely chance of a problem occurring and if you need to replace anything you can get it at the dealership. The conversion does require upgrading to larger 17-inch wheels so we'll have to wait until our rims and tires arrive.

Within the cabin the odometer no longer works, the passenger seat doesn't recline and all the speakers are blown. Apparently after 263,000+ documented miles the poor little gauge just couldn't hold up any longer, quite understandable and also quite common in 850s. There are aftermarket odometer gears you can purchase to fix the gauge with complete instructions. The passenger seat adjustment issue while annoying for potential passengers really doesn't bother us since we're the ones driving. The blown speakers, ah, now that does bug us.

Being that we're all about performance and not the I.C.E., we usually aren't one for stereo systems. All of those speakers and amps just add unnecessary weight, and I want to hear my exhaust broadcasting shifting revs, not some ridiculous bass beats. Anyhow, having said this we realized we do in fact want at least a decent functioning radio and set of speakers. Our crackling all-treble speakers projected the equivalent sound quality of those coming from a 1988 Yugo that had been sitting at the junkyard where mice had made homes in the subwoofers. It was painfully annoying to listen to in the countless hours of L.A. traffic. Enough was enough. Fear not readers, we didn't go all bling-bling on the stereo system; we simply replaced them with a set of stock speakers from a newer model Volvo that we found at a used parts junkyard. At a mere $10 apiece they were well worth it and our ears were thankfully and curiously bitching, "Why didn't you change them earlier dumb ass?!"

Also quickly noticeable in the cabin is the amazing lack of heat, making for a chilly ride in the subzero, okay low 60s, California winter. The heater core is leaking and it completely soaked the passenger floorboards. This maintenance issue we have yet to tackle as things have warmed up here and heat is not required (yes, I'm shamelessly rubbing that in for our Midwest readers). We will get to the issue, however, in our next installment.

The last two issues we dealt with this go around were blown coolant hoses and the fact that our big brick needed a good ol' alignment. The coolant hoses were easily fixed by replacing them with Stylin Motors silicone hoses. We also opted to swap out the turbo/intercooler hose kit. The silicone hoses are far more durable than the factory rubber hoses and are capable of withstanding up to 500-degrees Fahrenheit. The multi-ply silicone hoses come in several different colors to match any engine compartment color theme. Our kit came with "T" bolt clamps for a tight seal.

As for us driving crooked, that was amended by a visit to Driftspeed where they performed a laser alignment on our Turbo 850. Most enthusiasts often forget the importance of a proper alignment after lowering a vehicle. Without a good alignment a lowered vehicle can actually be dangerous to drive on the streets. Choose an alignment shop that is reputable and has good equipment. A laser alignment is the most accurate way to ensure proper steering angles.

Now sitting pretty in our still old, but at least decently functioning ultimate sleeper, we're content. Up next we're finally going to get to the fun stuff and add some real horsepower. In our next installment we plan to add a chip, an exhaust and a down-pipe - that equates to more power, horses and ponies so it's good from any angle.