Project Super VIII is at a bit of a crossroad. It’s a few hard-core upgrades (seats, rollbar, aero) away from being a very fast track car…at the sacrifice of streetability of course. The racer in me wants to pull the trigger and go all out with this car. If this were five years ago, I wouldn’t have flinched, but I’m older, hopefully wiser, and worst of all pickier.

That means I don’t want to give up my amenities, nor do I want to scream to the world that I’m driving a track car. Flying under the radar is what I’m more accustomed to now. A clean, sedate-looking exterior wins me over. Wings, canards, and splitters do not. There are exceptions (track cars being it), but the Evo spends more time on the road than it does cresting apexes at full tilt.

Therefore, there needed to be a way to extract quicker lap times and improve the fun factor without adversely affecting the interior and exterior of the car. The solution, as you probably guessed, is more power.

Somehow, adding horsepower always seems to be the answer. It can, however, be a slippery slope because with great power comes great responsibility. Wait, that’s a quote from the Spider-Man movie. In the car world, it usually means more upgrades, time, and money than you’d expect.

That’s why it’s great to have a proper game plan, and even a budget set when you begin to think about a serious power upgrade. It’s not just engine parts that need to be considered; brakes, suspension, tires, drivetrain, etc. all should be taken into account because those parts will now have considerably more stress to deal with, and some may need upgrading at the same time or shortly after.

If you recall, this Evo’s 4G63 is far from being in tip-top shape, and before a bigger turbo or any other power upgrades can be added, the internals will need reworking. I’m usually a hands-on guy, but when it comes to engine internals, I leave it to the experts. There’s a lot of know-how that goes into rebuilding bottom ends, not to mention proper tools and work space. Getting it wrong can set you back to square one with a lot of expensive paperweights.

The racetrack is arguably one of the most stressful environments for an engine, so I wanted to find a shop that specializes in just that. Enter Chad Block Racing Development or, as it’s better known, CBRD. If you’re an avid reader of Modified, you’ll remember we featured a bunch of CBRD Evos, and the quality and attention to detail is bar none. Chad happens to be a former ALMS race car driver, so to say he has experience in the racing world is an understatement. His approach to building and working on cars is that of a true motorsports environment, which equals meticulous builds and no corners cut. 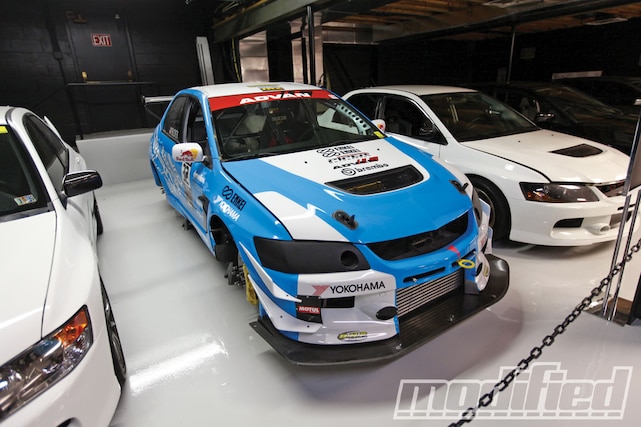 Even though it meant shipping Project Super VIII more than 3,000 miles to have the engine rebuilt, I knew Chad would treat the car like his own and really listen to my needs and expectations from the build.

After some consulting, we decided that going with a 2.2L CBRD built engine would be awesome at the track and still very livable on the street. I’ll get into full specs and parts used in a future story, but the main components in the build will include a Manley crank shaft, CP pistons, Carrillo rods, and Kelford camshafts. HeadGames Motorworks will handle porting, polishing, and refreshing the cylinder head so it’s as bit as good as the rest of the engine.

Chad also suggested that alongside the engine rebuild, now was a good time to tackle the drivetrain, especially this one since it’s got so many miles on it (more than 130K). With the added power, a solid driveline is a must so the experts at ShepTrans were contacted and will be working their magic on the transmission, transfer case, and rear differential.

As you can imagine, there is some serious work that’s about to happen to Project Super VIII, so stick along for the ride as the guts of this Evo are about to receive a major and proper overhaul.