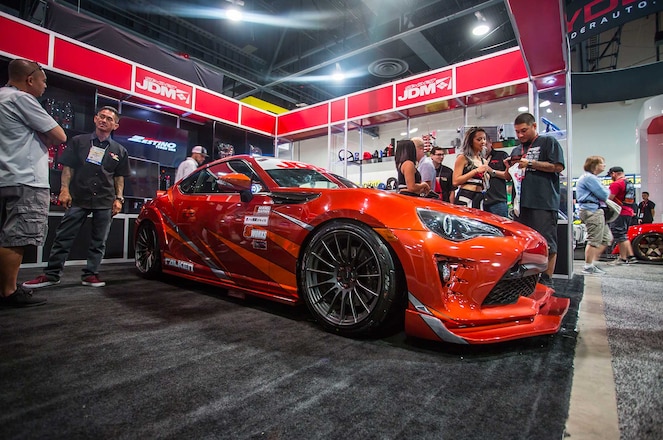 For those who have been following my Scion FR-S build, you probably noticed the project hasn't changed in awhile, other than the Signal Auto-style livery. For the most part, I was pretty happy with the way it looked. I ran into my good buddy Lee Ho from JDM Sport at some random car show I was covering and he presented me with the opportunity to showcase my car at the 2017 SEMA Show. I knew this was an opportunity of a lifetime and I, not knowing what I was getting myself into, cheerfully agreed. It was only after I agreed that I took a good look at my humble daily driver and knew I had to step it up in huge way.

The first thing people will see on the SEMA floor is the exterior of a car. I didn't want to go the huge riveted widebody route, which limited my choices for a body kit. A month before the big show I got word that KRC Modified, based in Osaka, Japan, was about to drop a new kit for the 86. That same day I sent an inquiry to KRC to see if they were interested in debuting the kit at SEMA. With the help of Dee Mendoza from SSWORXS, I was the proud owner of the first kit in the US. When the kit was finished, we had a real "overnight parts from Japan" encounter. The kit consists of a front lip, side skirts, duckbill spoiler and rear fender flares. Nobu from KRC says, "I chose to make under spoiler because I want to keep original front design of 86 Kouki. My image is like more wild and more stability. The KRC ducktail is the most popular product now in Japan. I used the idea of design for the trunk spoiler." The awesome thing about these rear fender flares is that there is no cutting involved. With all that in place, I knew a stock rear diffuser wasn't going to cut it and I also knew there would be a handful of Rocket Bunny/Pandem FR-S cars at SEMA, so I opted for an aggressive Rally Backer diffuser. 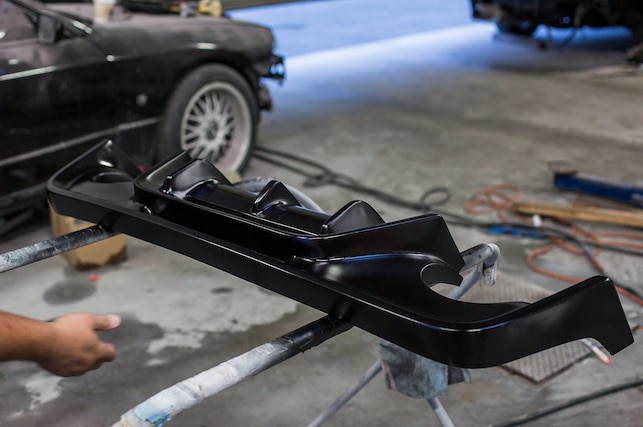 THE ONE STOP PAINT SHOP 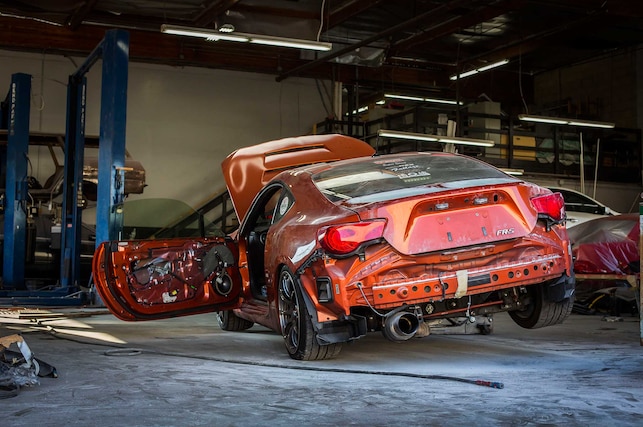 Originally the plan was to have the KRC aero painted and mounted. I headed to One Stop Paint Shop in Huntington Beach, Calif. for their evaluation on the project. After going through all the door dings and rock chips, head honcho Peter Rivas knew that it had to be a full paint job. Not only that, but since the KRC kit was for the Toyota 86, we had to do a kouki front end conversion. With only three weeks left before SEMA I had to make a quick decisions and pull the trigger. To make things even more difficult, I had a family emergency and had to leave for the Philippines for an entire week. When I got back, I had one weekend to do everything else I had planned for my car. Peter, his son Angel and I knew sleep wasn't part of our schedule that weekend. It was a learning experience as I helped these two artists with the easy but arduous task of sanding down parts of the body. We all worked through the night and some of you might notice we went a shade darker than the factory Hot Lava. The Rally Backer diffuser has a touch of elegance with Attitude Black paint from Toyota's color palette. 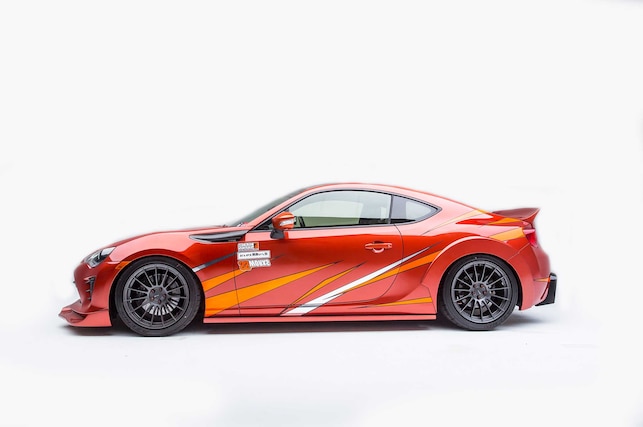 I wanted pay tribute to the '90s D1 drifters with the style of my livery. You can also see a bit of HKS' CT230R in the design as well. I enlisted the help of Superwow Factory, the same guys who printed out my Signal Auto Style livery. These guys have the same spirit and dedication as any Japanese worker. If something isn't perfect or up to their standards they won't dare sell it. If you're looking for top-notch liveries, Superwow Factory is the place to go.

For some people, an exhaust is just an obligatory part you add for (possibly) more horsepower, but sometimes it can be so much more. The guys over at TCP Magic helped me source this beautifully made titanium exhaust by Amuse - the R1 Titan. This particular system has a gold ring option they kindly added to my exhaust and it's your basic bolt-on affair. It's hands down the most beautiful and baller exhaust I've ever had on my FR-S. 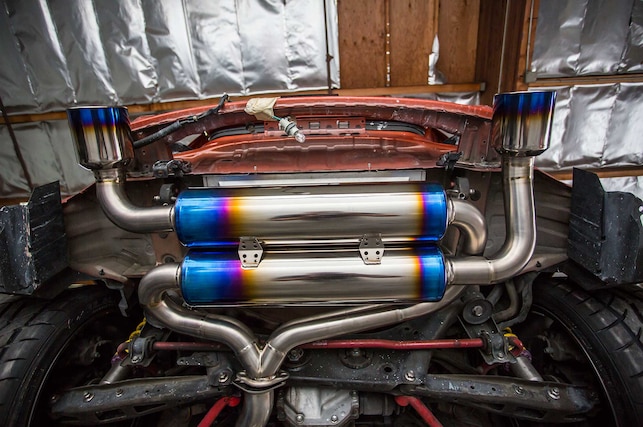 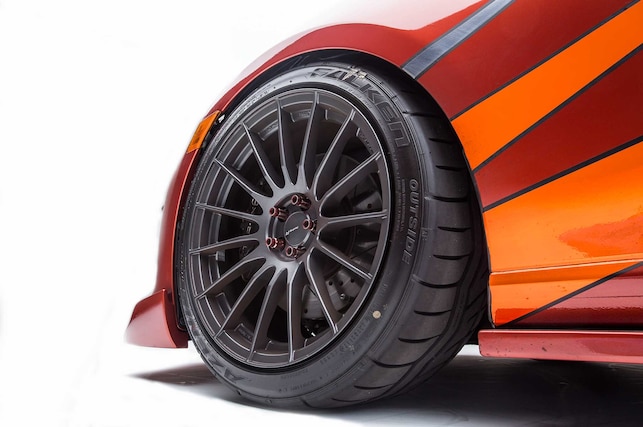 I'll admit, I've loved the Enkei RS05RRs ever since I'd seen them on Kei Miura's Scion FR-S Rocket Bunny Version One. I honestly think that Enkei wheels are immensely underrated in our community. These RSO5RRs are super lightweight and made using Enkei's MAT-DURA flow-forming method. Like all Enkei wheels, the they go through rigorous testing using Enkei's very own standard process called "Spec-E," going beyond JWL requirements, which is the Japan Light Alloy Wheel standard. I got these wheels before I knew what body kit I was going to get and personally, I think they work well together. 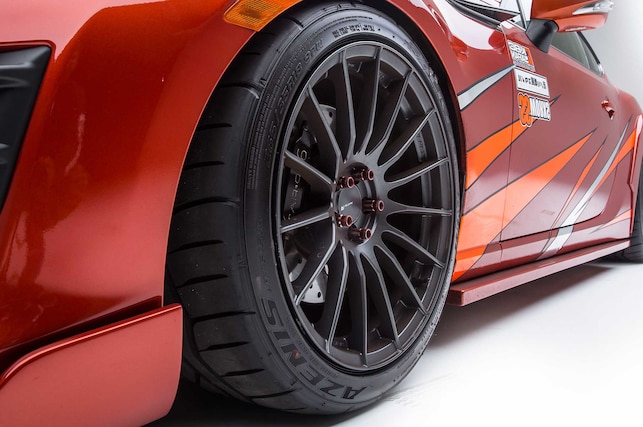 Improving on the already great RT615K, the "Plus" model goes a step beyond with a digitally engineered, nanotech-formulated compound for even more grip and improved handling. The beauty of this tire is that it was designed to perform on the track, but it also has a DOT approval for street-legal daily use as well. 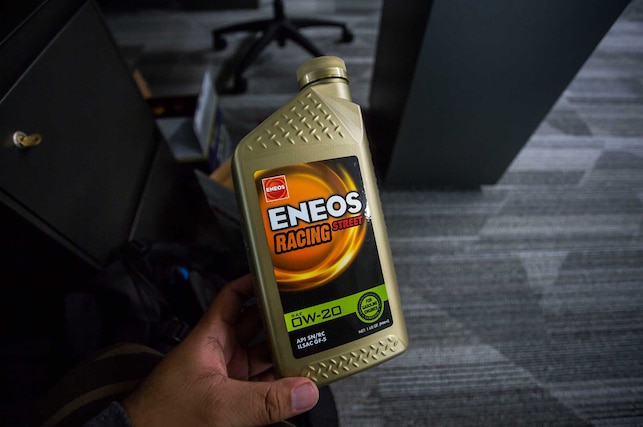 It's a small detail, but ENEOS came through with its newest product series called the ENEOS RACING Series. The ENEOS RACING PRO is for professional use, but as the name suggests, the ENEOS RACING STREET series is designed for the street and it's what's flowing through the veins of my FR-S. The advanced, fully synthetic engine oil is designed to exceed general synthetic oil in every aspect. ENEOS uses a higher quality base oil and adds a premium mix of additives, which were developed with all major Japanese automakers. This results in maximizing horsepower while offering oil film retention, oxidation stability, and anti-wear properties under high temperatures and pressure. The formula is perfect for racing applications, but has API approval for street use, which is exactly what I envisioned my FR-S for in the first place. 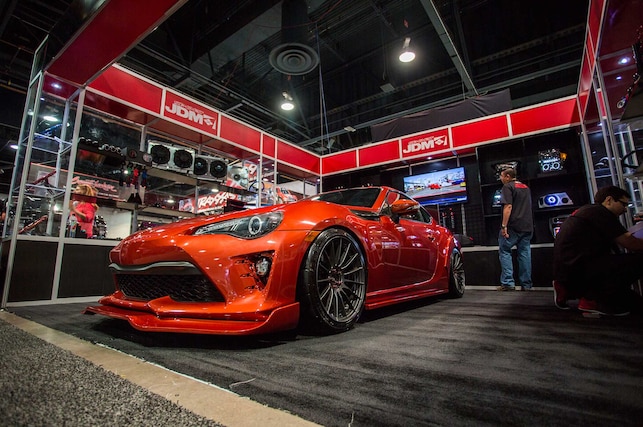 To this day I don't know how I was able to drive from Orange County to Las Vegas after a weekend with only a few power naps. My car wasn't perfect, a few things fell off on my drive out to Sin City, and the SuperWow Factory livery wasn't applied until the second day of SEMA with help from MV Wraps. I was really happy to bring a slice of Osaka, Japan to Vegas. While at SEMA, I'm not sure if it was the JDM Sport Vixens, the products on display, or my car, but the booth seemed pretty darn busy. Many of you might have tried asking questions when I was out doing my editor duties, but the answer is yes, you can buy each KRC part separately, such as the rear fender flares or the spoiler. 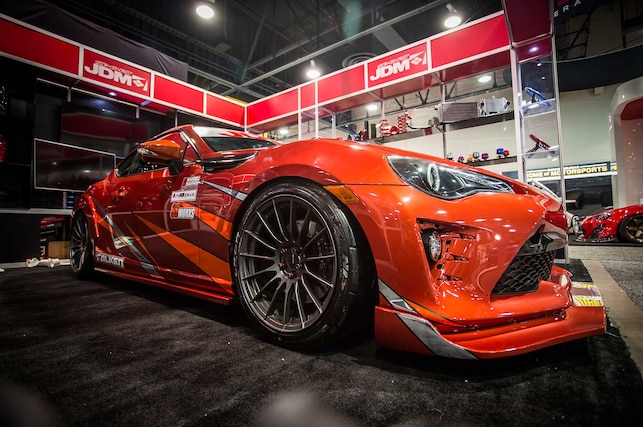 I owe my sponsors a ton of gratitude especially the guys that have helped me along the way such as Auto Tuned and One Stop Paint Shop. It was one heck of a ride, full of more memories than I can count. And if any of you are thinking of doing a SEMA build, my advice is to reconsider - but if you still want to do it, start as early as you can. Think of Murphy's Law: "Whatever can go wrong, will go wrong." I'll try my best to bring the car to as many shows as I can, but for now I'm just excited to be driving the only KRC Modified 86 in the U.S..