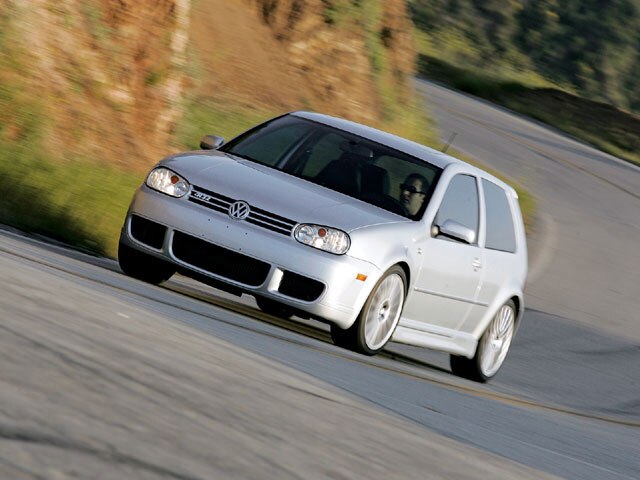 In response to joy or sorrow, Arabic women share a common response. They semi-cover their mouths and make quick, rhythmic elaa-elaa-elaa sounds.

You know what middle-aged American men do? Stare at inanimate objects and curse quietly. They walk around in circles, kick imaginary animals and memorize verses from the Auto Trader, turn in the direction of a desired vehicle's location and recite its specs five times a day.

It's been more than a year since Project Corrado left the ec garage; not a week goes by without mourning it. I was warned, repeatedly: "Don't sell it. You'll never find one this nice again." No words ever rang more true.

Believe it or not, I'd been looking for another Corrado SLC, checking the boards and weekly trader rags. What I've learned is that clean Corrados are a rarity. Finding a good one takes time, money and a fair bit of luck. Being short on time, I set my sights elsewhere, or rather re-focused my energies on another high-value target, the Volkswagen R32.

It's been four years since VW's all-wheel-drive wonder first graced North American roads and thousands of happy R32 owners lay testament to its universal appeal. This was a car that spoke to driving enthusiasts outside the VW brand, 'conquest buys' as the OEMs like to call them. Faced with a choice of several like-minded cars (Subaru's STi and Mitsubishi's Evo) the R32 offered superior build quality and design-although it was the least powerful of the three.

It was a reasonable trade-off more than a few were willing to make. Ultimately, the R32 proved to be a high-performance machine with a sizable comfort factor. It was a car to drive to work every day and to the track at weekends. The R32 was (and still is) as good as it got.

I found this 2004 model with 34,000 miles on its clock from a private party. With the exception of spectacularly shitty tires, the car was bone stock, completely unmolested and pristine. Prices for a low-miler like this range from $19,000 to $26,000.

First Impressions
This car feels like it just left the showroom floor. No squeaks, rattles, or strange vibrations. It tracks dead-on straight and feels as balanced as any car I've ever driven.

The thick, three-spoke steering wheel has an anatomically perfect shape and the steering features plenty of tactile feedback, more than Audi's TT. Its brakes lack the firmness I'd like, but they appear to be more than adequate for spirited street/canyon use. Same goes for the suspension-it's more than capable of handling anything found on public roads.

For me, Volkswagen's R32 works on multiple levels. With its 40/60 fold-down rear seats, I can convert the car to something akin to a small station wagon. There's decent headroom for real adults, plus enough space to fit all manner of gear, from an entire Weber grill to a bunch of race tires. The rear seats are well defined and passenger-friendly. The front buckets and their oversized bolstering are like street-friendly race seats, fully adjustable and firm. Plus, they look extraordinarily cool.

Although clad in handsome factory aerodynamics, the R32's silhouette is that of the classic Golf. In other words, it attracts little unwanted attention. The R32 has become something of a 'stealth bomber,' a car favored by those who crave high performance without high visibility. We see several highly modded R32s on a regular basis, including the awesome twin-turbo model from ec's July 2007 issue. Its owner delights in scaring the bejesus out of the automotive ignorant. It's fun to watch them 'pour' out of an unassuming Golf.

Essentially, that will be the premise of this new ec project. We will build the world's most understated hot rod, a vehicle capable of frightening its passengers or ferrying them to Home Depot.