We transform a BMW 335d in a day with LTBMW, adding chassis upgrades and a Burger Motorsport tune. 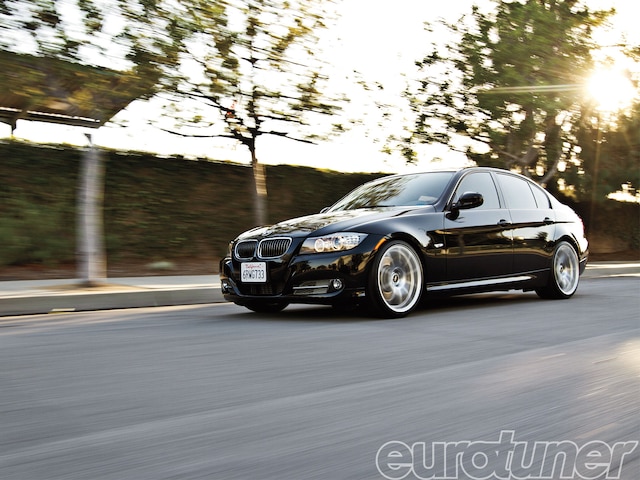 Many of you may remember the long term BMW 335d we had the pleasure of reviewing back in 2009. The 3.0-liter turbocharged engine put down 282hp and 428 lb-ft of torque while enjoying 26mpg city and 36mpg highway. So when the opportunity came to tune a 335d, we grabbed the parts we could find and headed to LTBMW in El Monte, CA.

Our subject, Derrick Vieira’s BMW 335d, was equipped with the Sport package that included 18" wheels, Potenza RE050 run-flat tires and Sport suspension. While the setup was good, we felt an improvement could be made with Öhlins Road & Track coilovers, VMR wheels with Continetial ExtremeContact DW tires plus a Burger Motorsport tune. The parts would be installed by up and coming BMW specialist, LTBMW. The company has seen a stratospheric rise in just a few years and its well-equipped workshops include several lifts and a paint booth to handle almost any request. 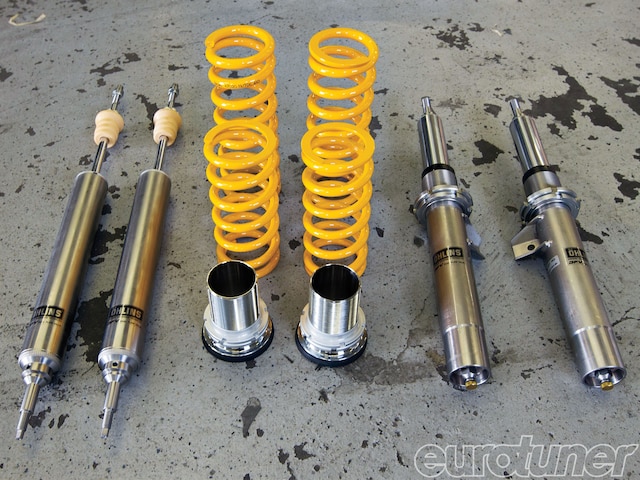 So the choice of Öhlins Road & Track coilovers for our project was an easy one. The system is, as the name suggests, comfortable when running errands, while weekends can be spent chewing rumble strips at the track.

Both front and rear feature Dual-Flow Valves, adjustable damping and lightweight corrosion-resistant bodies that are rebuildable. The front struts are 15mm shorter than a stock strut housing, while the springs on each corner were specifically designed for the 335d. The rear uses Öhlins dampers, springs and adjustable perches.

The reputation and craftsmanship is impressive, and so is the $2599 price tag. But you get what you pay for, and Öhlins has a remarkable pedigree to back up this product.

The technicians at LTBMW had the coilovers installed in no time, proving the installation can be achieved in a few hours with the right tools and skills.

The front struts utilize OE top mounts and the shorter springs provided in the kit. On both the front and rear, the auto-leveling sensor needs to be undone first before unbolting the tie rod, pinch bolt, strut bar and top mount.

The rear perch is mounted on top of the new spring rather than on the control arm. After unbolting the bottom of the damper, control arm and auto-leveling sensor, pop the trunk and remove the trim to access the top mount.

The OE top mount nut and washer have to be separated and replaced with the Öhlins-supplied nut. After installation, the adjustment knobs can be custom-fitted for easy accessibility.

Full details, our step-by-step guide and video are available at eurotuner.com 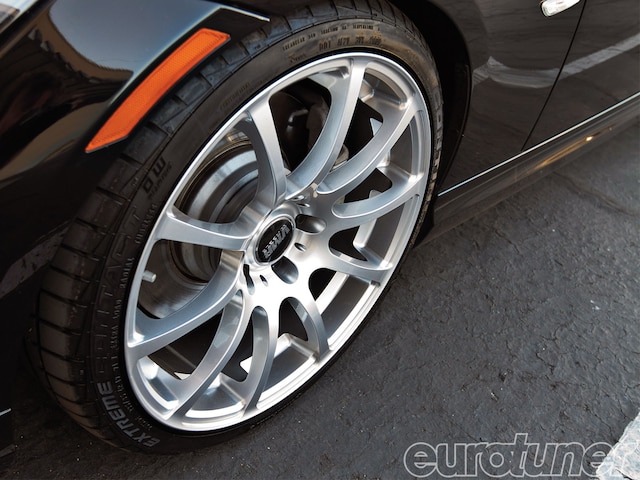 Once the LTBMW techs had the coilovers in place, they transferred the OE tire pressure sensors into our 19" VMR V701 wheels before mounting the Continental ExtremeContact DW tires.

In the past we’ve used Continental ExtremeContact DW tires on track and were impressed by the grip they provided in both wet and dry conditions. For the staggered V701 fitment, LTBMW mounted 235/35 R19 front and 265/30 R19 rear tires. 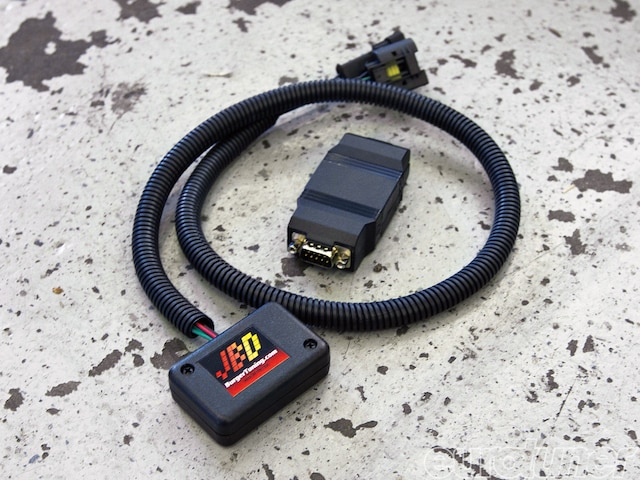 While the BMW 335d makes an impressive 428 lb-ft at 1750rpm, Burger Tuning offers the JB Diesel Performance Tuner that suggest gains of 60hp and 100 lb-ft torque. This whetted our appetite to discover more.

The JBD Tuner plugs into the fuel rail, intercepting the signals and altering them to increase fuel delivery. It includes a controller that can be ziptied out of the way. It has an internal rotary controller that allows you to alter the fuel setting manually from under the hood. With a range of 0-100, it was set midway by Burger Tuning, but Derek only reported a significant difference once it approached 100%.

According to Burger, the lowest setting gives a 25hp gain over stock, while the maximum equates to around 60hp. We hope to verify this in a dyno test next month.

When set on max, the JBD Tuner can throw engine codes, so we also opted for Burger’s BT scanning tool and BMS CAN plug that is inserted into the OBD2 port. The tool can identify and delete codes as well as add some cool features. Following the instructions, the fuel gauge can become a boost gauge, requiring you to monitor fuel range from the onboard computer. The green indicator arrows on the OE cluster can also be employed as programmable shift lights, if you wish.

These aspects will be covered in more detail at eurotuner.com

As a finishing touch, we decided to swap the 335d lettering on the trunk for more discreet black badging from Bimmian.

The company provides a variety of letters and numbers in silver, red, black and gold to either replace your insignia or create custom insignia.

Removing the old numbers was straightforward. They peel away when a plastic edge is applied under each edge.

After cleaning off the glue, the Bimmian numbers glue down as before. It’s a very cheap modification that provided a sophisticated transformation.

Bimmian also provided black carbon vinyl that sticks over the BMW roundels. These are simple to apply to a clean surface and again make a subtle difference to the overall appearance.

“This thing hauls!” Derrick Vieira exclaimed after setting the internal dial on the Burger Tuning JB Diesel module to 100%.

Having driven it for a few days he followed up with: “It’s super-responsive and I’m still getting the same 29mpg on my daily commute. The only thing I’ve noticed is if you stomp on it when the engine’s cold, the factory ECU drops into fail-safe mode and the check engine light comes on. But once it’s fully warmed up, I haven’t had an issue…”

When asked about the Öhlins suspension, Derrick was initially skeptical it could improve on the OE Sport suspension. With the coils on their lowest setting, Derrick was concerned it would scrape or rub. However, he reports an overall improvement in handling with reduced body roll from stiffer springs that are only marginally noticeable. In fact, he was stunned that such a low ride height could be so comfortable and well controlled. “Öhlins definitely delivered. This is much more than I had hoped for!” he continued.

He also noted that the new wheel and tire combination was more responsive on turn-in than the heavier run flats they replaced – this could also be an attribute of the lower profile tires. Either way, the handling is transformed with the suspension, wheels and tires.

European Car
Prepping & Painting Your Car – Tricks of the Trade
With a little bit of time, a whole lot of patience, and some tricks of the trade, even the most noob among us can pull off prepping and painting a car like a pro
Scott Tsuneishi – Feb 19, 2020 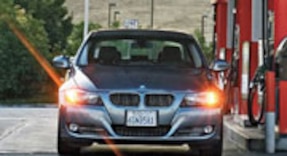 Long Term Update BMW 335d - Putting Her Through The Paces

Despite being a bit short in interior styling the BMW 335d stands out in its driving characteristics. - European Car Magazine 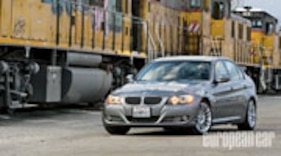