Arellano GTI
Tears welled up when we heard Jessie Arellano was stripping his pristine '98 GTI VR6. The factory Porcelain blue paint looked immaculate at Waterfest 14 (et 10/08), but the enthusiast decided to further refine his project by shaving the door handle pockets as well as the hatch and antenna. The fenders were also slightly pulled, but Jessie assured us the factory lines will remain.

The interior is almost finished, with a false floor and seats upholstered in cognac leather. The motor's a 2.9 liter with 268 cams and GIAC software, but stay tuned for more upgrades. 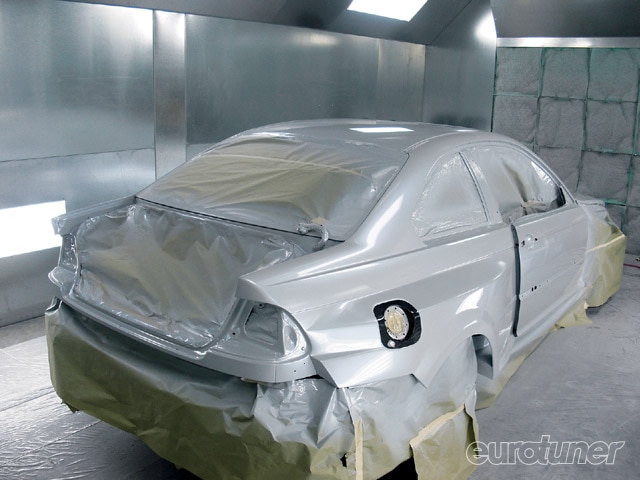 Karwerkz M3
Buckle your seatbelts because the Karwerkz project is about to take off. Literally! Horsepower Freaks claim the motor in this '03 M3 will be the highest horsepower E46 on the planet. The 3.2 liter S54 is fully-built with 1200cc injectors, three fuel pumps and a dual ball-bearing 74GTS turbo. Boosting to 30psi, the car's expected to reach 900whp.

Karwerkz and Asuka Design have also created the unique carbon widebody, which extends the front fenders by 5" and the rears by 9" each side. As for the wheels and tires, Enkreuz built a custom set of 19x10.5/13" wheels in flat black. They currently have a red pinstripe but it will be changing to orange to match the Groma rollcage, suspension and brakes. 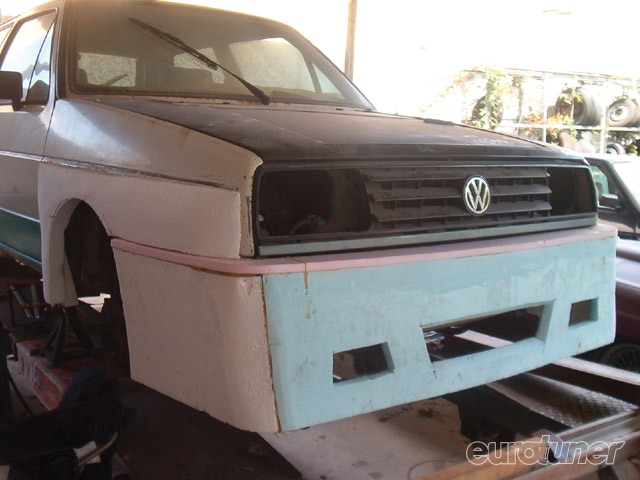 Kinder Golfen
Sixteen year-old Michael Ogren, along with his father Mike, are working on a widebody for his '87 Golf GL. The student from Spring Hill, FL is fortunate his dad owns Protech Services (specializing in European cars) and has raced VWs in SCCA events in the past.

Inspired by our little magazine, Michael is modeling the widebody on the Golf Rallye. The fenders were rolled and cut for clearance, while the front bumper was shortened to prevent the body protruding.

As you can see in the photo, layers of styrofoam have been glued to the body, and a custom front spoiler, fenders, skirts and rear bumper are in the process of being crafted. Their ambitious goal is to use a moldless fiberglass technique to create the panels, using dad's experience with ultra-light aircraft.

The 8v engine has been disassembled and fitted with 16v pistons milled to 11.8:1 compression. It also has Total Seal gapless piston rings, a windage tray, baffled oil pan, Techtonics 268 cam and dual downpipe.

The suspension has been beefed up with shocks and springs, while the rear bushings have been inverted to increase rear steer for autocross. They've also adjusted the toe-out and camber for the same purpose.

The car is currently running 15" CSA wheels with 195/50-15 Kumho tires. The brakes are GTI-spec discs all round with Hawk Pads, while inside the stripped interior gets Momo accessories and Toyota Celica GT seats.

With all these mods it should prove unbeatable. Michael informed us he's already had great success with it.

"I commonly start from the back of a 25-car field and pass more than 10 cars in the 20 lap races. I've taken home a win and many top five finishes so far this year." 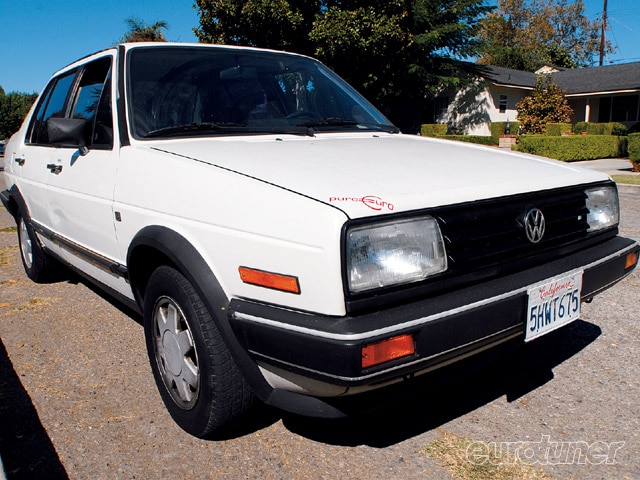 For months, Brandon had been talking about building a Mk2 after selling his mild-tuned B7 Audi A4. Within hours of finding the '86 Jetta GL on Craigslist, he was on the Surfliner train heading to San Diego, CA to collect it. A day later, the car was at DC Performance (Abbott Automotive's new facility) getting checked over. Apparently it runs great, is mechanically sound and in above-average shape - all for $800.

Stay tuned for an interesting hood swap by Andrews Powdercoating, H&R Ultralow coilovers, plus a new headlight setup, badgeless grille and single wiper conversion from Performance Cafe. For the future, Brandon has a 1.8T ready to install, as well as a Mk4 dash.

Shifty's Bug
We hadn't heard from Robert Lackey at Shifty's Spraywerkz in Oklahoma City for a while but he's been keeping busy. He picked up this '02 Beetle TDI in April with a broken auto trans and beat-up body. The car had 180k on the odometer so he put it on jackstands and stripped everything but the dash and motor. With his team, they swapped in a manual and shaved everything but the bare essentials, then sprayed it Nimbus grey and VW Alpine white with black accents. The 17x7.5" Borbets were repaired and color-matched as well.

After years of tearing down other people's cars, Robert told us this was the first one he'd done for myself, "So it means a lot to me."

Every part he replaced on the car was upgraded, and more power is on the cards as well. "Believe it or not, I really wanted to build this car for the track," he told us. "The paint and body was an afterthought that just came about once the car was apart. The plan was to drive it daily and eventually run bio-diesel on Unitronic software. I'd like to show it when possible and get it to the track at least once a month," he continued. "I owe a lot to the guys at local club, WetDub. They donated parts and time, supporting me throughout the build."

Contact: to be included on this page, email details of your vehicle to:eurotuner@sourceinterlink.com