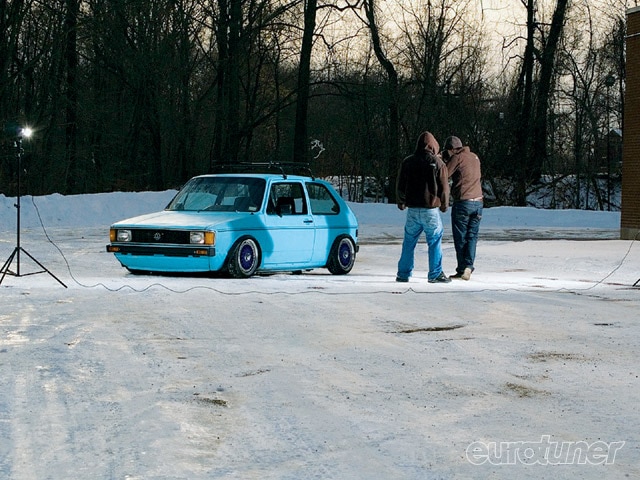 Easter Bunny
Would you believe us if we told you that a couple of hours on Craigslist and a few hundred bucks could get you an old-school project car? We introduced Jamie Otfinoski's '84 Rabbit GTI last month and it's truly astonishing how he has transformed this stock Rabbit into a slammed daily driver - all while on an extremely tight budget.

The car and wheels were found online, while replacements parts had to be sourced from junkyards and other sources. After replacing the damaged parts, he painted the shell and 15x7" BBS RS wheels, allowing the car to take on an incredible new form. 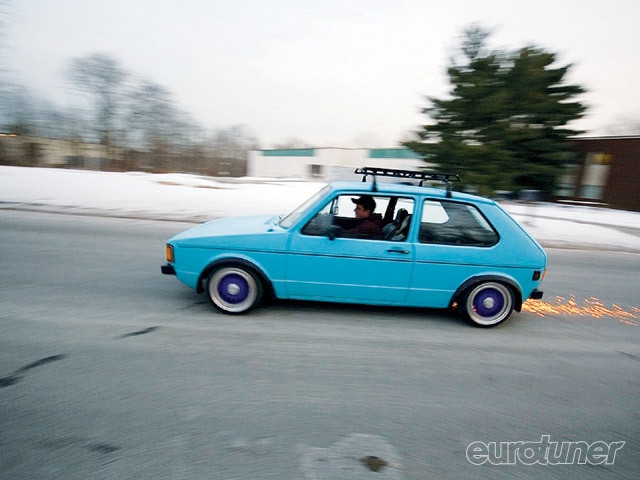 The next major modification was the suspension and, as you can tell, this Bunny is on its bum! The subframe was notched while the control arms were raised. An Air Assisted Customs bag kit used Vmaxx fronts and Chapman rears. To get the car even lower, Jamie trimmed the unibody and welded the seams. "This helped the car go down another inch," he told us.

Reminiscent of the old-school mini-truckin' days, notice the embers from the rear. "We just fabbed some drag blocks under the rear beam. Now the Bunny can shoot sparks!" he laughed. 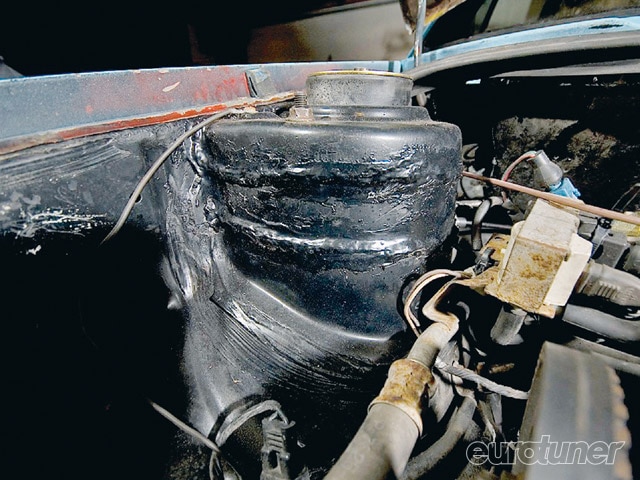 Dow GTI 16v
Robert Dow's '92 VW GTI could barely drive three years ago. He began restoring it at as school assignment in his automotive classes, where he upgraded nearly everything from the wheel bearings to the shift bushings. Using it as a daily driver, the motor fried so he bought a 1.8L to swap in the bay.

Last month, we followed his progress as he sourced new parts for the motor from junkyards and online forums. The block is from a '95 Golf and head from a '87 ABA 16v. The internals were changed for ABF 10.5:1 pistons secured by Total Seal piston rings and ARP bolts. For more airflow, the intake manifold was match-ported and Techtonics cams, valve springs and exhaust were installed. 16v parts were sourced for the throttle body and crank gear.

With the hardware in place, Robert has to finish the electronics before driving the car. Currently, he's acquiring wideband O2 sensors and Mega Squirt electronic fuel injection. "All I have left to do is finish building and connecting the wiring harness for the Mega Squirt and ensure it's working correctly," he said. 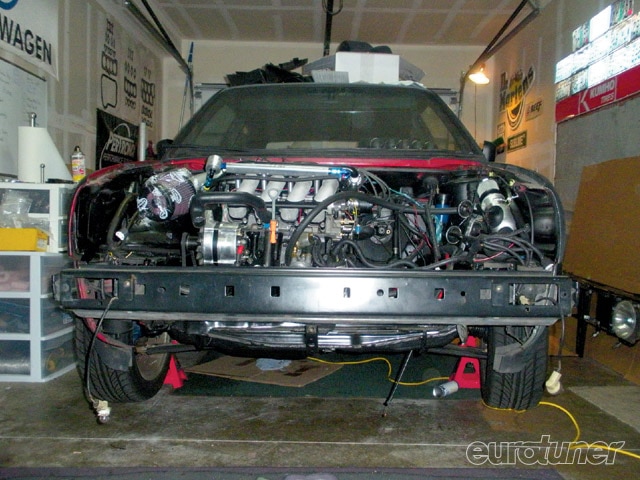 Hoke Passat
Elsewhere in this issue, you'll have witnessed one of our first B5 Passat features in years. With hardcore Euro styling such as Abt interior, BBS RS wheels and Aviator grey paint, Jordan Hoke's sedan has elements of a finely modified Euro.

After our photo-shoot, Jordan didn't waste time tearing the car apart for its winter transformation. A set of color-matched Abt wheels will replace the BBS to suit the Abt theme. Cory Sterling from Euro Auto Source is helping with the interior overhaul by replacing the headliner and pillars with matching grey suede. Ditching the Audi seats, Jordan purchased a set of Recaro A8 seats, along with matching leather rear seats and door cards. The seats will feature grey leather centers. To ensure the colors match inside, all plastics will be dyed black. A black 20AE sunroof console and visors will also be installed.

And if you thought there weren't more Abt accessories available, Jordan has a box of parts are awaiting installation, including door pins, pedal covers, gauge overlay and front grille.

Turbo Tom
When Tom Thongprasert set out to build his '04 VW GTI VR6, the goal was to surpass the 500whp mark. Using a Precision T61 dual ball-bearing turbo, enlarged JE pistons, SP forged rods, ARP bolts and an R32 head, the muscular combination was mathematically capable of doing so. This month, Tom rejoiced as his motor was finally buttoned down and put on the dyno, making 536whp at 24.5psi on 93-octane fuel.

The joint project between Schimmel Performance, C2 Motorsports and Dubsquared also proved reliable as Tom drove his GTI home without fault codes or hesitation. "I'm happy to report the car is being daily-driven to work," he confirmed.

Tom's not done with the motor yet. Future plans are even more ambitious and will see the car go back on the dyno for a race-fuel tune with boost increased to 30psi. In the long run, a rebuilt head is also in the works with a port job, cams, titanium springs and retainers plus inconel valves. After that, Tom plans to fit standalone management, which should help with fuel delivery and data-logging, while a tubular exhaust manifold and bigger injectors will improve efficiency. He hopes to find even more power and torque from the 2.8 turbo.

To be included on this page, email details of your vehicle to: eurotuner@sorc.com