We Prepare Our VW GTI 1.8T For More Power And Boost. 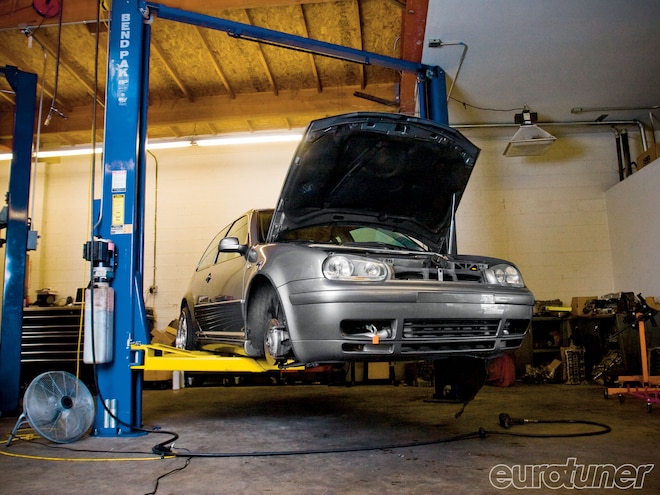 The VW/Audi Group's most popular engine is arguably the 1.8T. In the VW Golf, GTI, Jetta, New Beetle, Passat, Audi A4 and TT, the turbocharged 1.8-liter 20-valve was adopted around the world from '96-05. 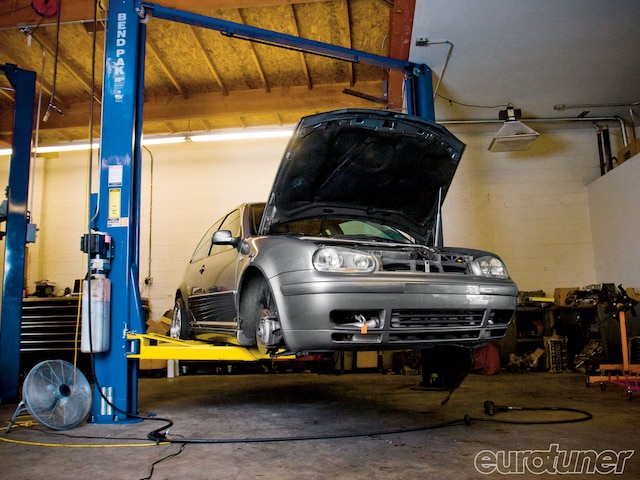 The inline-four didn't get the best start, with early models limited to a humble 150hp at the flywheel, but output was increased to 180hp with a modified K03 turbo, then 225hp with a K04 in the Audi TT.

Everyone who's owned a K03-equipped 1.8T knows it reaches a ceiling. No matter what combination of bolt-on parts you install, there's no simple way to make significant horsepower gains.

Take Project Silverstone, for example. Our '03 GTI's best run on a Dynojet was 195whp and 233 lb-ft of torque. This was after we installed a high-flow Kinetic exhaust manifold in collaboration with GIAC software, Techtonics turbo-back exhaust, Evolution Racewerks front-mount intercooler, Forge diverter valve, Unorthodox pulleys and BMC intake.

With all these upgrades, the next big step was a big-turbo conversion. There are countless examples out there, including our own Combat Correspondent Brady Cloward's Project Jetta which made 353whp after its turbo upgrade (et 2/07). With so many turnkey turbo kits available, from inexpensive K04 upgrades to larger GT-series conversions, we decided to first ensure we have a good foundation for Project Silverstone...

Photo 3/8   |   Integrated connecting rods with 83mm Mahle pistons are key to strength and torque from our 1.8T

Most tuners will tell you 300-350whp is the most you can safely squeeze from the stock engine block. What they don't tell you is that this power isn't typically available until 5000rpm.

So instead of worrying about the turbo for now, we first sought advice from Integrated Engineering (IE) to make our four-cylinder stronger in preparation for more power.

The weakest components in the 1.8T are the connecting rods - the link between the pistons and crankshaft. Stock VW rods are made of powdered steel alloy. The design is tapered at the top and narrow across the bushing. This is sturdy enough for a mildly tuned motor, but when you want big power, the rods aren't able to handle the stress.

You can do a drop-in rod solution, which improves the situation but can mask the weakness of the stock pistons. For high-power daily-driven applications, excessive strain on the piston wristpin bushing can increase wear rates. Another drawback is simply the small engine of the 1.8-liter; the small displacement means a bigger turbo won't effectively make torque until at least 4000rpm.

The ideal solution is Integrated Engineering's 2.0L stroker kit. It increases the displacement of the engine by increasing the travel of the piston. In our case, the 1.8-liter is bumped up to two liters using larger pistons, H-Beam rods and a new 2.0T crankshaft.

We specified our kit with 83mm forged Mahle pistons over JE or Wiseco parts on Integrated's recommendation for daily use. They replace the factory 81mm pistons, giving us a capacity of 2008cc from the stock 1781cc.

The larger piston diameter reduces cylinder pressures and thus stress on the engine. The pistons are supplied with the appropriate oil-pump drive-gear and are clearanced for the oil squirters. The compression ratio is lowered from 9.25:1 to 9:1 ratio. The slight drop is ideal for street applications and doesn't sacrifice too much gas mileage or drivability. These are all key factors to increase the life of the motor that a simple drop-in rod set can't do.

The larger pistons also generate more power from a given amount of fuel. According to Integrated's figures, it's around 8-11% in this case. So the benefits are adding up.

Photo 5/8   |   Removing the engine is a complex process, which starts with removing parts of the front bumper, headlights, etc

As for the rods, IE manufacturers some of the strongest on the market. They're constructed from vacuum-drawn 4340 forged chrome moly steel alloy and secured with larger alloy steel bolts from ARP (9.525mm versus 8mm stock).

The standard-length 144mm IE rods feature a robust H-beam design with wider beams for the ultimate strength and 20mm carbon-steel wristpins. They have a machined finish with multi-stage heat treatment and are shot-peened for strength. Overall, the rods are claimed to be twice as strong as the stock parts, able to withstand more than 550 lb-ft.

The final stroker kit component is the new crankshaft. It's based on the VW factory 2.0T FSI crank that IE modifies to drop into the 1.8T block. In order to do this, they've changed the oil-pump drive-gear on the front of the crankshaft to work with the 1.8T's oil pump and chain. The crank journals are the same diameter but the stroke is increased from the 1.8T's 86.4mm to 92.88mm for the FSI.

The FSI crank is a forged steel part compared to the 1.8T's cast iron. In addition, the 2.0-liter crank was designed more meticulously by VW, allowing it to be stronger without increasing the weight, so the rotational mass isn't significantly higher.

With the 2.0 stroker kit in our possession and Raven Motorsport in Long Beach, CA in possession of Project Silverstone, they pulled the motor from the engine bay. Obviously, this isn't the easiest task for the Average Joe but the experienced mechanics at Raven freed the 1.8T in less than three hours, where it would take most people half-a-day or more.

Stay tuned next month as we show the engine disassembly and rebuild using IE's stroker components.