In the previous installment, we fitted GruppeM’s exquisite titanium exhaust and carbon fiber ram-air intake. And while these components were expensive, they did deliver a 10hp increase at the rear wheels.

We were scratching our heads about what to do next when GIAC offered its software for appraisal. Ever since we stopped bolting on carbs, software tuning has become the key to unlocking the full potential of your engine. This is most apparent on turbo engines, where they respond well to increased boost and more fuel. However, naturally-aspirated engines, especially one so highly-tuned as our 414hp BMW M3 V8, are a little more challenging.

Regardless, the lab coats at Garrett Integrated Automotive Corporation had developed a software program that can be flashed into the engine’s ECU via the OBD port, while most BMW tuners are still relying on piggyback units to alter the electronics.

GIAC’s Sales & Marketing associate Austin Wylye explained how the company developed the program alongside its work on VF-Engineering’s supercharger systems. Having access to cars from VF before the blowers were installed allowed them to play with the internal maps and create the software, which now has several levels.

With our exhaust and intake, we’d be trying GIAC’s software programmed for cars with an exhaust. According to Austin, this is most commonly requested since the majority of M3 owners looking for software will also have or be planning to get performance parts.

Tuning a car with software is a very simple task. With GIAC’s Flashloader, you simply plug it into the OBD port, wait less than 10min and drive off.

We lengthened the process by asking for before and after’ dyno runs so we could show you precisely what the new program was doing.

On the DC Performance Dynojet dyno last month (et 4/11), we finished with peak figures of 351.3hp at the wheels and 256 lb-ft of torque once the GruppeM intake and exhaust were fitted.

Strapping our E90 to GIAC’s AWD Mustang dyno, remarkably our base figures were 350.1whp and 256.5 lb/ft with air temp at 61 and 25% humidity. However, we had run 100-octane fuel in the car for that test, whereas it had a tank full of Mobil 91-octane this time.

Being California-based, GIAC tunes its software for 91-octane and we wanted to see how it would perform on pump gas rather than a special brew.

Ilie Nepomuceno, GIAC’s dyno operator, has a testing procedure that involves doing three runs 4mins apart. They look to see if the power increases and the point at which it drops off as the engine gets too hot and the ignition is retarded. The numbers quoted here are the best figures using this process.

Once the brief software upload had taken place and the ignition was cycled (turned on and off) a few times, the dyno runs began again.

The M3 has a very sophisticated ECU that reads many sensors and has more maps than most cars, making it very difficult to tune and surprisingly difficult to dyno.

If it detects any parameter out of the ordinary, it retards the ignition to protect itself. The ECU is also more adaptive than most, meaning it learns how to respond to prevailing conditions. So when new components are fitted, it can take the ECU a while to adapt to the new status and optimize its output. In short, we had to conduct ten dyno runs before we were confident we’d seen the best of the GIAC software.

With the power climbing with each run, the GIAC smiles broadened as we sailed past the 7-10hp they claim, finishing our day with 361whp and 261.4 lb-ft of torque.

That’s a 10whp and 5 lb-ft increase on an engine that’s already running at over 100hp/liter.

After fitting the GruppeM components, we had noticed a slight surge in the throttle response. We’re not exactly sure why it did this, and you wouldn’t notice it unless you spent every single day behind the wheel, but we’re happy to report the GIAC software had cleaned it up.

As the graphs show, there is a continuous and constant increase in output almost as soon as they started measuring. This means you get more of the same it’s an M3 with more. There’s no big dips or steep climbs in the dyno graphs, just more of what you paid for.

As a daily freeway driver, slugging from low revs in sixth gear is common practice and the software has definitely sharpened the response, helping it pull cleanly from low revs, and making it more inclined to continue to its 8500rpm rev limit.

If you’ve got an M3 and are looking to enhance it, the GIAC software does the job its intended for, although we have noticed a 5% increase in fuel consumption since it was installed.

If you didn’t know, the M3 has its famous M button on the steering wheel. Pioneered by the E60 M5, in that application the button released the full 500hp fury of the V10 engine. With the button in default, the car only had 400hp.

On the E9x-series M3s, the button doesn’t offer the same excitement. It does, however, give you a shortcut to the many functions of the M3’s electronics. For example, you can program the button though the iDrive system to activate the throttles quicker, change settings for the traction control, steering response and suspension. So at the touch of a button, the car can go from tame to terrorizer.

We’d always wondered if the M button on the M3 actually made a difference to its output. With the throttles opening quicker, it certainly made the engine more responsive, but how would that translate to output?

With time to spare, Ilie at GIAC kindly offered to conduct back-to-back dyno pulls with the button on and off. The results can be seen in the graph below, and it’s more noticeable than we expected.

From 2400rpm (where they started measuring) to about 3200rpm, the V8 picks up significant horsepower and torque. This certainly explains why the car feels more responsive when you hit the accelerator and answers a question that had been bugging us for years. 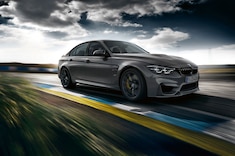 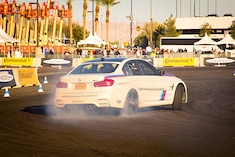 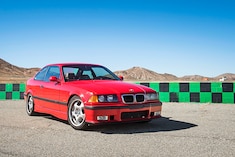