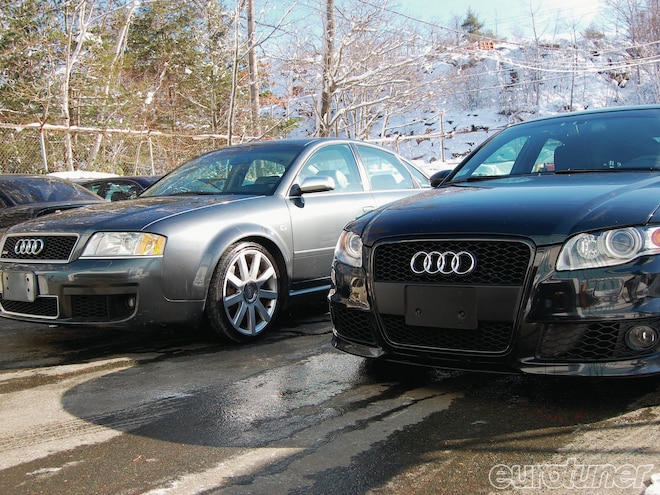 We were contacted by Lee Malo from Advanced Technologies in Gloucester, MA. A customer with a ’07 Audi RS4 had acquired an RS6 and commissioned them to do the first-ever engine swap in the US. The idea was to build the only RS4 4.2L twin-turbo with heavy mods. 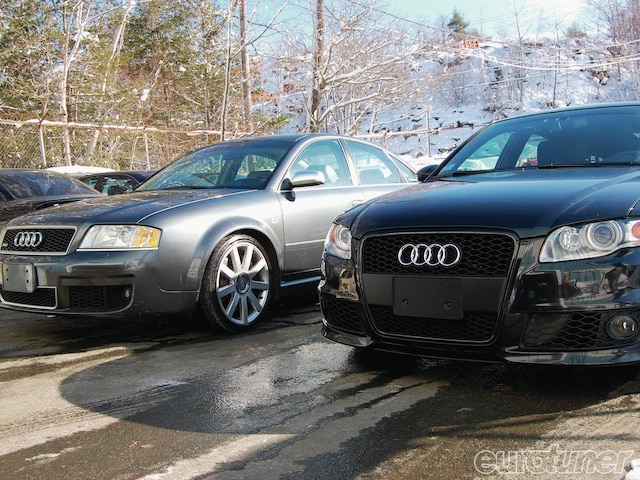 The transmission is a custom-built 01E manual with hardened gears plus a Tilton twin-disc clutch and flywheel. The diff will also be rebuilt and the car fitted with Stasis suspension, Alcon brakes, etc.

We can’t wait to see how this monster turns out and will keep you updated on its progress.

If you remember the incredible 591whp VW R32 turbo that took part in our 2010 Tuner GP (et 2/11), then you’ll be familiar with the work of Bluewater Performance from Westminster, CO.

The crew had told us they were working on some new projects, and here’s Jason Koenig’s ’04 R32 as proof. He’s owned the car since new but decided it needed to be a little “better”.

The plan was to build a flex-fuel engine capable of 650-700hp and drop the car on Bagyard air-ride. The job was entrusted to Bluewater.

We’ll look at the extensive body mods in later months but for now, the engine build included 8.5:1 JE pistons and IE rods, with Raceware studs securing the head that houses 264/260˚ Schrick cams.

The turbo is a Precision 6265B with billet wheel, mounted in a cast manifold and coupled to a 3" downpipe with 3" stainless exhaust and high-flow cat.

There’s a short-runner intake manifold connected to a Garrett FMIC by stainless piping. The fuel system uses a Walbro 255 lph pump as well as dual Bosch 044 pumps in a surge tank. These feed the colossal 1200cc Bosch injectors that are controlled by Bluewater’s flex-fuel software tune, aiding by a water/meth kit.

Looking at the spec, the R32 seems more of a racecar, yet there’s been sufficient body mods to classify it as a show car when it all comes together.

We’ll have more details on this ambitious project next month.

Readers with an elephant memory might remember Jordan Hoke’s ’98 VW Passat 1.8T from his feature in

et 4/09. Back then, the resident of Lebanon, PA ran it on black 17” BBS RS with Aviator grey bodywork, an S4 interior and a string of bolt-on engine parts.

Since then, he’s been itching to do something different and eventually decided to embark on this unusual right-hand drive conversion.

To make his life simpler, he bought a RHD front-end and proceeded to strip his own car to transfer all the parts. This included the RHD firewall to accommodate the steering column, heater box, dash, carpet, pedal assembly and steering rack. He also needed the door cards since the window and mirror controls go on the other side. He’s also been switching the interior harness over to RHD so all the wires reach their connections.

In addition, Jason has removed everything from the bottom of the car to undercoat and powdercoat select parts. He then hopes to do an engine swap and is researching the feasibility of installing an Audi V8.

Add some Air Lift suspension and rebuilt 17" Carline CM6 wheels and we have the basis of the Passat conversion.

We’ll continue to follow the overhaul as it unfolds. 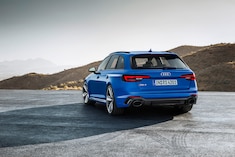 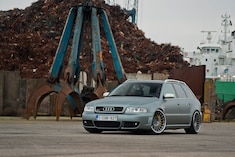 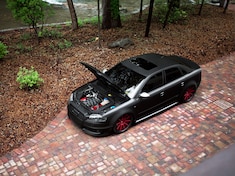 Check out Stewart Wasson's 2008 Audi RS4. Dressed up in 3M 1080p Flat Black vinyl wrap and rolling on an Air Lift Performance kit with ADV.1 10 Series wheels, this sinister stealth-themed RS4 grabs the right amount of attention where ever it goes. 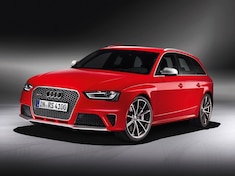 Read about the new third generation Audi RS 4 Avant, a potent combination of performance and everyday practicality. For the latest news in the industry, visit our News section on our homepage. - European Car Magazine