We’re closer to finishing our big-turbo build with 034Motorsport. 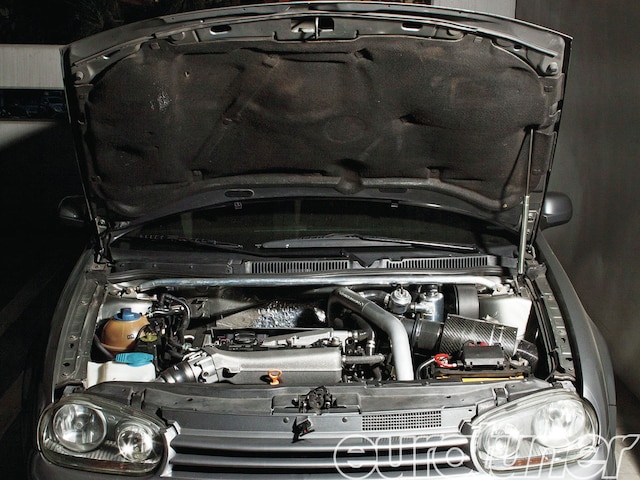 Welcome back! It’s been a few months since we reported on Project Silverstone. But trust us, we’ve been working day and night to bring our ’03 VW GTI back to life.

In case you’re picking up the mag for the first time, we’ve been ramping up our 1.8T for more horsepower with the help of Integrated Engineering, Raven Motorsport and 034Motorsport.

Our GTI started at Raven in Long Beach, CA where we rebuilt the bottom-end with Integrated’s two-liter stroker kit using Mahle pistons, an FSI crank and H-beam rods. 034 built us a quicker AEB valvetrain, updated with enlarged ports, oversized valves and an Autotech intake cam. When the motor was balanced and running, it was time for the next level.

There are plenty of turbo kits available for the 1.8T and we could have easily picked up a tubular manifold that mounts the turbo high in the engine bay. But we’re fans of OEM quality and appearance, so we entrusted our GTI to 034 for something different.

With that said, the boys at 034 put their heads together to create a big-turbo package that would keep the bay stealthy and maintain as much factory reliability as possible. This way, our friendly law enforcement shouldn’t be alerted if we pop the hood.

“When we put this kit together, there were several considerations besides power such as fit, finish and reliability,” Javad Shadzi from 034 told us.

“With aftermarket manifolds, it’s not uncommon for the nuts on the turbo to come loose. However, we shouldn’t have that problem because we’re going to use an OEM-style manifold with factory fasteners. The reality is, with some other manifolds, you’re going to be constantly tweaking to keep them on the road. With this manifold, it’s going to be something you can live with and daily-drive.”

Removing the factory turbo parts was fairly straightforward and took half-a-day. Before we knew it, 034’s high-nickel cast manifold and a quick-spooling Garrett GT2871R were temporarily installed on Project Silverstone.

Due to the nature of the task, it would take some time to design and fabricate all the necessary components. “We had to see how things fitted and build parts for the location, such as oil and water lines for the turbo, new heater-core hoses, modified brake lines and even some intercooler tubing,” Javad explained.

In the last update, most of the parts were mocked-up for production. The downpipe adapter and inlet pipe required the most attention. The adapter had to mate with various size turbos, while the 3" diameter inlet pipe was shaped to avoid clearance issues and still flow well.

Contrary to what 034 will offer to customers, our inlet pipe was fabricated from metal; however, production parts will be silicone for an easier fit. A larger 2.75" MAF housing from the 225hp Audi TT was also added. While not part of the kit, 034 made further improvements such as removing the unnecessary secondary air injection and EVAP components. In the process, the original plastic breather hoses (known to crack) were replaced by 034’s silicone parts.

The intake manifold was next on the hit list. The majority of US-spec 1.8Ts share a small port design and when pushing a bigger turbo, with a ported AEB cylinder head, it can rob the power potential. So 034 sold us on a big-port, European-spec manifold commonly found on the Audi S3. In addition, an 034 phenolic spacer was fitted to prevent the manifold conducting heat. In the midst of 034’s madness, they threw in a catch-can breather kit. While not a requirement, it’s a safety measure to collect oil and water vapors that can be re-circulated into the intake tract. 034’s kit uses a baffled vortex design with larger silicone hoses.

And finally, one of the last pieces to the puzzle was fueling. Most stock VW fuel pumps have enough flow for 200-300hp. Since our goal was above this, an external pump was required. Fortunately, 034 had just introduced its new FP34 fuel surge tank, which would be the easiest solution. Capable of 700hp, our bigger Bosch 550cc injectors would never go thirsty; especially since the stock fuel lines can flow up to 500hp.

The FP34 features a fully enclosed Bosch 044 pump (capable of 90psi) inside a one-liter reservoir. The unit has a return line from the fuel pressure regulator. The aluminum body is compact, measuring 8.5” in length with a diameter of 4".

For our GTI, it fitted below the rear bumper, close to the fuel lines for ease of installation. The FP34 is also quiet because it’s fully submerged, damping the sound.

Once in kit form, you could fit this yourself at home over a weekend but with the fuel flowing and the big-turbo parts in place, the engine was ready.

We filled the coolant and checked all fluids. The GTI started without hesitation but our battle was only half over. Next month we’re going to 034’s in-house dyno for tuning.

“When we put this kit together, there were several considerations besides power such as fit, finish and reliability.” 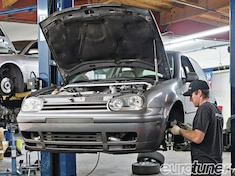 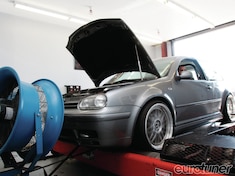 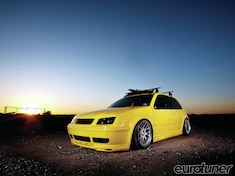 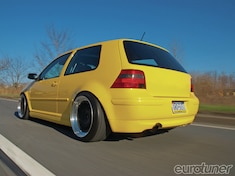 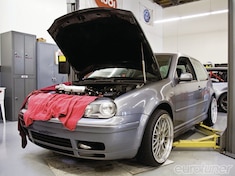 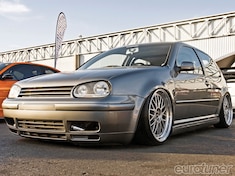 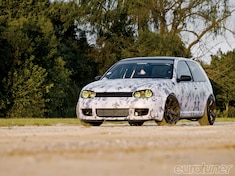