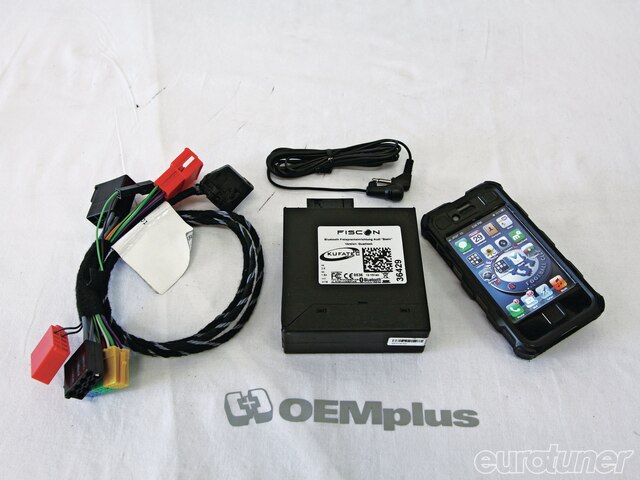 We’ve been promising power upgrades for our ’07 Audi A3 2.0T for several months now but small obstacles keep popping up. The latest was uncertainty over the cam belt swap, which we thought was due but Audi has now extended the period until 110,000 miles. In the initial confusion over the procedure, we decided to clarify the situation before risking an old belt on the dyno.

In the meantime, the guys at OEMplus in Laguna Hills, CA had offered to install a Bluetooth module to make the car more user-friendly.

As we’ve mentioned before, we got a great deal on the A3 but it has almost no optional extras. So we’ve been upgrading it slowly, previously fitting the aluminum-carbon interior trim from the European Audi RS3, also obtained from OEMplus.

With so many states demanding hands-free in-car phone use, Bluetooth devices have become an essential part of a car’s inventory. Because we swap vehicles fairly regularly, we carry around small earpieces, but nothing beats the clarity and convenience of a built-in OE system.

Available in Europe through many dealerships, the Kufatec Fiscon Bluetooth kits are recommended by OEMplus and have been designed to integrate into the vehicle seamlessly, needing no additional wiring. In fact, all the tools you need to fit the kit are radio removal keys, T25 torx, Philips screwdriver, 8mm socket, trim tool and Ross-Tech VAG-Com. The latter is obviously to re-code the car so it sees the phone kit, muting the radio automatically to take a call, etc. The trim tool can be bought on Amazon.com and allows you to remove trim without damage. If you’re working on a VW (the kits are available for VW, Audi and BMW applications – see below), you won’t need the radio keys to remove the head unit since they’re screwed in.

Fiscon offers several kits for Audis, depending on your car’s equipment. With our “Concert” DVD/tuner and no nav, we needed the cheaper Fiscon Basic kit, which includes the control module, wiring harness and microphone.

The kit was supplied with a round mic, but a rectangular one is available at a $32 premium and should fit behind the dome light better – this didn’t fit our car, which already had a hole for the round mic.

Once fitted, the kits allow you to pair a Bluetooth phone to the car to make calls or stream music. The music uses the A2DP protocol, so only plays in stereo on the front speakers, rather than quadraphonic on all the car’s speakers. This can affect the playback of some tracks on your iPod, but it should be OK with Pandora, for example.

If you have an in-car screen or multi-function display (MFD), you can dial and receive calls, view missed or recent calls, as well as access your phone book. It works like any OE in-car system with full functionality. As a bonus, some VW models also give you an additional display for oil and water temp, RPM and boost directly from the ECU. VWs with the RNS-510 head unit can even use voice commands to operate the phone. See oemplus.com for more info.

Getting started
Fitting the Fiscon kit is certainly a DIY proposition if you’re moderately confident. Otherwise OEMplus will install it for $150 plus the price of the kit (see below).

At step 5 we had some problems with the volume control. Our basic DVD head unit wasn’t able to adjust the volume; OEMplus suspects we need steering wheel controls to do so. We hope to address this with an Audi S3 steering wheel upgrade. Until then, we can adjust the volume from the phone itself. We also have to make and receive calls from the phone itself, since we have no MFD to display information nor control buttons to operate it. As we said, the car was cheap but we’re now finding its limitations. However, the calls come across the front speakers crystal clear, with good voice clarity. The mic also picks up our conversation without having to raise your voice. We can now stream music for the first time, so we’re finally entering the multimedia era!

For the price of this Fiscon Basic unit (and its simple installation that should take about 90min), we’ve enhanced the convenience of Project A3 considerably for its daily driving duties.

If you own a newer VW/Audi, BMW or Mercedes, you can upgrade to Bluetooth just as easily with these OE-quality Fiscon modules that make the car more interactive, while keeping your phone use legal.

Rubbing Problems
In the first installment of Project A3, we did a number of ambitious chassis modifications to improve the handling and appearance of the car.

Against some advice, we went for 235/35 R19 Conti DW tires on our 19" TSW Nurburgring wheels, and opted for H&R’s Ultra-low coilovers because we always want our cars to be as low as physically possible.

Problem is, for daily use the rear was rubbing with its tucked tires. If the car wasn’t used to haul parts regularly, we might have overlooked it but the rubbing was an annoyance so we decided to address it.

The first step was to fit slightly narrower 225/35 R19 Continental DW tires all round. These are the same compound as before, so we know they work great in the wet and dry, but the lower sidewall and narrower tread meant it would avoid the fender.

We also obtained slightly taller springs from H&R, who could happily substitute the same springs into the Ultra-low kit on request. We had them fitted in minutes by the team at Supreme Power Parts in Placentia, CA. They know the car after helping out in the past with several mods and had suggested the alterations to alleviate the problems.

Although the ride is slightly harsher with the lower sidewalls, the car still rides remarkably well for such a low stance, and the rubbing seems to have disappeared, which was our original goal.

Next month
Cam belt problem resolved, we’re hoping to hit the dyno and install some power parts (although we’ve said this for months now!). 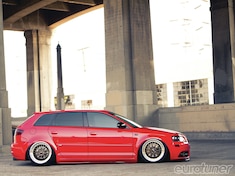 Of course, the owner of this 2007 Audi A3 2.0T S-Line is no different from the rest of us. Keep reading for more of Jason Maglinaos' story. - Eurotuner Magazine 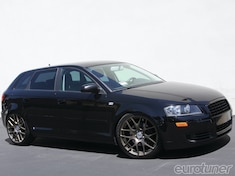 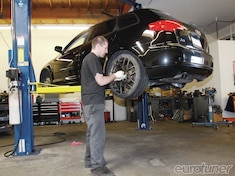 With this month being an Audi-themed issue, we felt it was the perfect time to welcome the newest member of the eurotuner family – say hello to our 2007 Audi A3 2.0T project car. Keep reading for the step by step coilover install complete with pictures. - Eurotuner Magazine 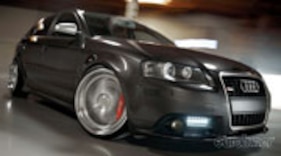 Check out this 2007 Audi A3 2.0T that has a four-cylinder 16v turbo engine, Neuspeed software, Forge Motorsport diverter valve and atmospheric spacer, Bilstein PSS10 coilovers, and much more! - Eurotuner Magazine. 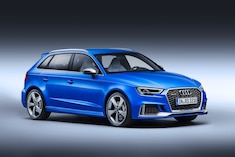 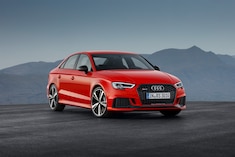 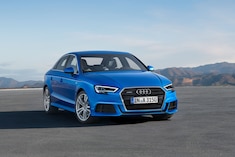 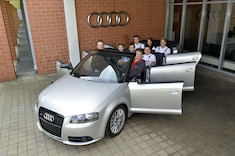