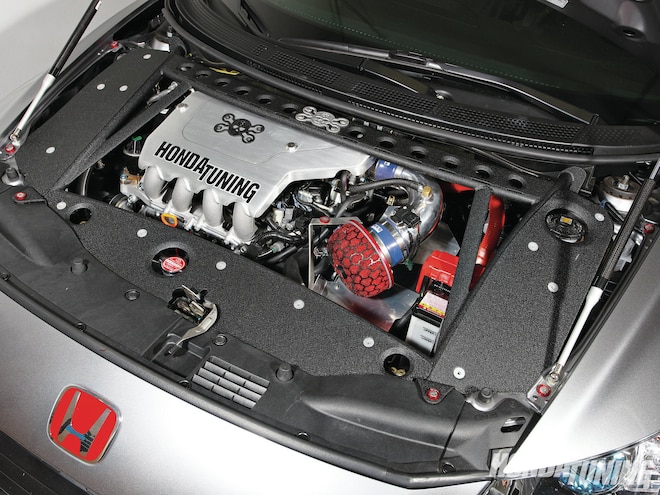 In the Winter ’10 issue of Honda Tuning magazine, we paid a visit to ASC Speed Metal for a glimpse at their incredible custom fabrication skills. They have the ability to create just about anything you can conjure up, including (but not limited to) hand-crafted suspension pieces, custom exhaust manifolds, complex rollcages, and amazing detail pieces. Second to none in both quality and functional creativity, we gave Dana Czech at ASC a call to see if he’d be up to the challenge of fabricating some custom goods under the hood of our Project CR-Z. The challenge part of that equation resides in the fact that our car is an actual production model, and must be returned to Honda in one piece. That means no cutting or drilling, and basically any mods that are made, have to be completely reversible, with no signs they were ever therea tall order for a very cramped (and rather strangely shaped) engine compartment. Nevertheless, sight unseen, Dana accepted the job and from the moment I popped the hood in front of his Lakeside, CA, facility, it was clear that the wheels inside his head were already turning. 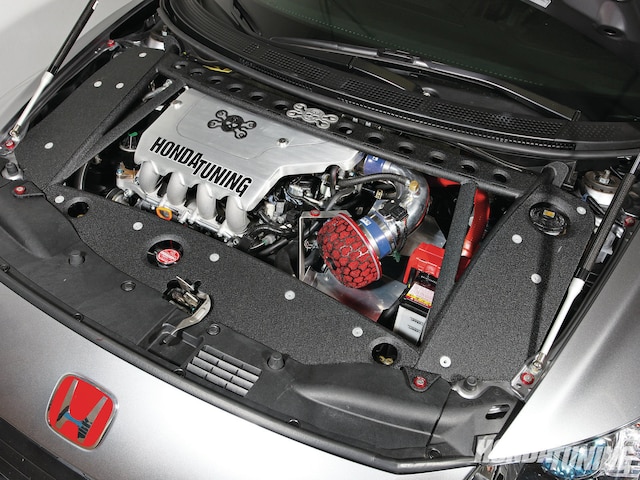 Shock tower bars are often the first mass-produced item that a manufacturer will jump on when a new car is introduced to the U.S. market. The shiny aluminum bar has been a staple in the aftermarket world for years, and whether or not all of them actually make any improvements to the chassis is debatable. They’re not very difficult to create for a Honda, especially since the design of the shock tower has stayed pretty much the same for the past 20 years or so. However, with the latest generation Fit and the CR-Z, the layout is quite a bit different. We were only able to find two bars on the market so far. Both were available as special order from Japan, extremely overpriced, and tough to source. Our preference was for something custom that would make a real-world difference in reducing flex up front. Dana removed the windshield wiper cowl in search of some rigid points, and found an excellent two-bolt anchor right next to the shock towers on each side. Another solid area is the front crossmember, and tying the rear of the engine bay together with the front horizontally, then fortifying the connection with a set of thick lateral bars seemed to be the best course of action.

Engine cover
The OEM plastic engine cover that sits atop a pair of posts is a little silly, and all but begging for some type of replacement. Spending hours going back and forth between the car and the work bench, Dana was able to coax his own version that perfectly bends around each runner on the intake manifold. The larger, much more interesting cover gives the motor a more pronounced appearance, and was scuffed by hand to get a brushed aluminum look. An ASC skull and wrench logo is mounted right in the center to let onlookers know who created the one-off piece.

Photo 4/15   |   Dana Czech test fits the freshly cut side cover prior to marking and drilling the panel for mounting.

Bay covers
The front and side flat covers that you see were a result of Dana’s new car vision. He states: Some of the newer Hondas and Acuras have a lot of plastic panels covering everything but the actual motor. It hides things like the ABS, battery, and other pieces that we wouldn’t be able to remove on this production car. I figured why not create a custom set of covers to hide some of it and clean up the engine bay? Using a metal skeleton that bridges off of the main four-point brace, the front and side panels are attached using Allen-head Dzus fasteners. The radiator cover features a dimple die opening that grants you full access to the radiator cap, as well as two additional holes that reveal the custom ASC radiator brackets. Using real .44 Magnum shells, Dana came up with a set of radiator stays that combine a little old-school hot rod style with our modern-day CR-Z. The merging of the very different generations works well, and is something ASC Speed Metal is very familiar with, as they work on every type of vehicle from hot rods and motorcycles to various import brands.

With the mock-up complete, Dana double-checked all of the clearances and pulled everything back out of the car. Triad Powderworks in San Diego, CA, was called upon to give all of the custom parts a final coating to provide longevity and protection. Triad has well over 90 colors in stock, complete in-house sandblasting service, and they rely on environmentally friendly chemicals. We requested a textured matte-black finish for everything except the engine cover and battery tray, which both had their brushed aluminum appearance sealed with a clearcoat. In no time at all the parts were prepped, coated, and ready for pick-up from Triad. The end result is a picture-perfect finish, OEM quality that blends in perfectly with the factory plastics underhood.

Due to the CR-Z’s rigid chassis right from the factory, we assumed there wouldn’t be much of a noticeable difference until the car hit the track again. We were dead wrong. Just taking the car through the streets, on and off of the freeway ramps, there was a very real increase in rigidity up front. So much so, that we’re in search of some bars for the rear to even things out.

The fit and finish of Dana’s work is impeccable. He took a car with far too many restrictions on it and came up with a slick combination of functionality and style, while giving our car’s engine bay an entirely new look. Best of all, ours is the only CR-Z in existence with this particular setupone of the many perks of going to a custom fabrication shop like ASC Speed Metal to have custom pieces created from scratch, just for your project. 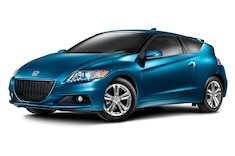 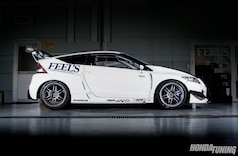 Premier Honda Tuners, FEEL's Twin Cam wanted to do something different so they took a 2011 Honda CR-Z and swapped in a K24/K20 motor with ITBs. 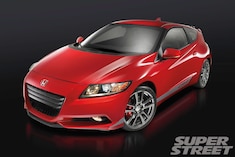 Honda Performance Development is taking things to the next level with the 2014 Honda CRZ HPD Edition, a car purely for the street enthusiast.

Marc Ducrow is perhaps the biggest Mugen fan you'll ever meet. Don't believe? Then why not check out his 2011 Honda CR-Z EX equipped with just about every Mugen part available for the ZF chassis. 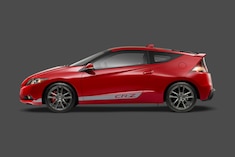 Come with us as we go for a ride in the new 2014 Honda CR-Z HPD, a CR-Z loaded up with a whole slew of HPD goodies including their new supercharger system.

With experimental enthusiasts venturing from the norm like Bryan Bui, we feel the 2011 Honda CR-Z may just have a chance.

We put Jackson Racing's new Honda CR-Z supercharger to the test and see if it serves as an alternative to the complex and often pricey K-series swap. - Honda Tuning Magazine