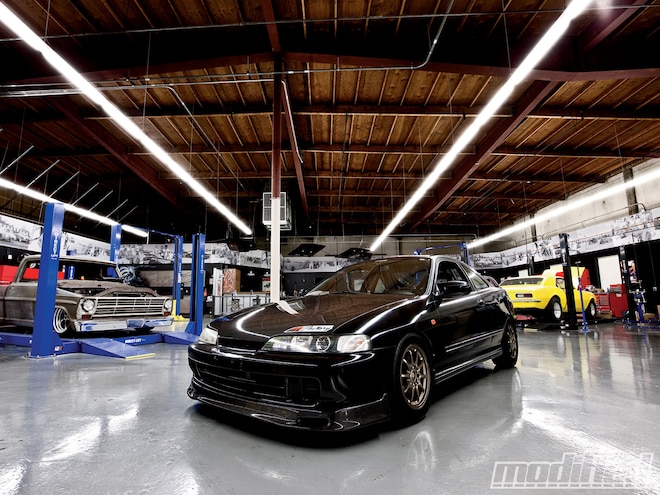 The Acura Integra, much like the Honda Civic, defined a generation of modern-day hot rodders. With its relatively light chassis, excellent suspension setup and plethora of B-series engine options, it was the perfect FWD platform to modify and go fast in. In early 2000, the Integra was replaced with the RSX, but to much chagrin, the RSX proved to be inferior to the Integra in many ways and never really caught on. 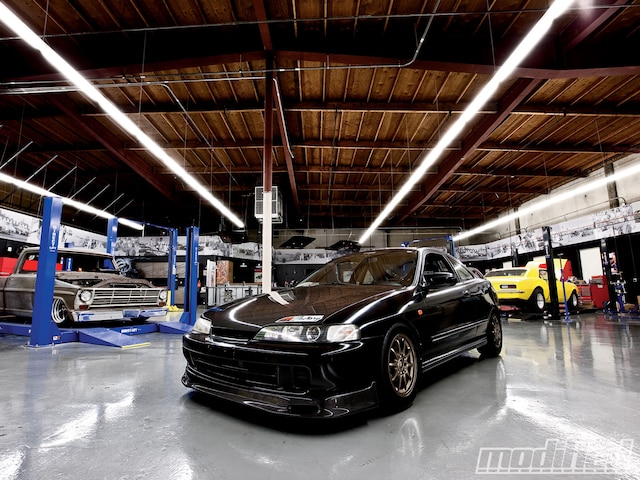 To this day, there are few FWD cars (new and old) that can compete with the Integra's bang-for-the-buck performance, hence why it's been in our project car stable for more than two years. There's just so much you can do in so many different ways, but the end result is always the same: it's an incredibly fun car to drive.

Our DC2 Integra started out life as a '99 GS-R model, but upon purchasing it sight unseen (other than a few photos) from an auction house for just over $2,500, it turned out that all the guts of the GS-R were replaced with LS model parts, including the engine. The body was also heavily vandalized, but that all made it an even better candidate for a project car.

The exterior mattered the least, as the goal was to build a fast and fun street/strip car with a modest budget. However, if you look at the photos right now, the paint is really starting to show its age and it's becoming increasingly difficult to drive the car with pride. A paint job is on the wish list, but the DC2 has always been more about performance than looks. Paint is a low priority, so unless we find someone to paint the car on the cheap, it'll stay that way.

At the heart of the chassis is a K20A2 powerplant. Simply put, it's by far the best modification done to the car, albeit a complicated one. The K-series swap in the Integra chassis provides power potential that no B-series can match. With simple bolt-ons (K-tuned intake and header, a Church Automotive reflash and a Vibrant 3-inch exhaust) our K20 made 228 whp and 173 ft-lbs of torque. But the best part of all is how rock-solid reliable it has been. Oil changes are the only maintenance item ever done to the motor, with countless track days under its belt. Despite the initial high buy-in price of a K-swap, it proves its value the more you use it. These days, it's even easier than ever to install with companies like Hybrid Racing and K-tuned building swap-specific parts.

Photo 4/21   |   Painting the rollbar proved to be time consuming because of all the masking.

Using the Type-R's amazing handling prowess as the driving force behind our suspension buildup, our DC2 has been equipped with a complete Type-R brake setup, including the control arms, calipers and hubs. After all, it's hard to beat Honda OEM quality. We replaced the stock struts and shocks with KW variant 3 coilovers that have provided a great amount of adjustability to properly dial the suspension setup in. So far, it has worked incredibly well both on the track and off.

Photo 5/21   |   Once the paper was laid down, some acetone was used to clean the metal - then the rattle can paint job commenced.

The latest and probably last additions to the setup are Type-R front and rear sway bars. By flexing less than the GS-R bars, they help improve cornering grip by transferring more contact patch to the opposing tire in a corner. Sportcar Motion took care of the relatively simple install. While the front bar bolts in, the rear stock GS-R subframe can't be used with the Type-R sway bar. You could replace the subframe with a Type-R unit or just buy an ASR subframe brace that allows the use of the Type-R sway bar.

If you've been following the DC2 Project car closely, you'll remember that a couple months back the decision was made to build the car into a more track-oriented vehicle. That meant a rollbar was welded in, courtesy of Robi-Spec, and rattled-canned black by yours truly to avoid rusting. The carpet was reinstalled to keep it somewhat street-worthy, but anything of significant weight was tossed. The sunroof was pulled and plugged by a carbon-fiber cap by lighter-faster.com, and just before the photo shoot for this issue, the heavy metal hatch and hood were replaced by carbon-fiber units from Seibon.

A total of 26 lbs were shaved by switching over to the Seibon parts. The OEM hood weighed 38 lbs, compared to the Seibon hood's 23 lbs, and the hatch saved 11 lbs over the OEM one, which tipped the scales at 29 lbs. A professional glass guy came and swapped the OE glass over, as it wasn't worth the trouble doing it myself. Costing just a tad over $100 for the removal and reinstallation, it was much cheaper than buying a new piece of glass and installing it. A Seibon carbon-fiber front lip and rear Type-R spoiler were added to change the look of the Integra because it hadn't received an exterior makeover since the JDM front end was installed. Those two products added 9 lbs, so they didn't come at much of a weight penalty.

Photo 15/21   |   The MFactory Metal Plate LSD will maximize traction by distributing the power to the wheels equally, resulting in faster corner exit and lower lap times.

When the car was down at Sportcar Motion in San Diego, Loi Song and his crew not only cleaned up the engine bay (thanks, guys!) but also installed an MFactory 1.5-way clutch type metal plate limited slip differential and a 5.46 final drive. MFactory is a relatively new player in the LSD world, but it has proved itself in the Honda drag race scene, where many of the top cars are using their diffs. Road racers have also seen good success with their products, and we'll soon be putting the DC2 to the test and providing a full track review on how well the differential works in an upcoming issue.

While the transmission is apart, a shorter final drive is a great idea. The MFactory 5.46 final drive can provide a 24 percent increase in torque over the OEM 4.38 drive, which will improve acceleration quite a bit. It's a great way to improve lap times around a racetrack without adding more power to the engine, plus the fifth and sixth gears in the Type-S gearbox are known to be too long, so this helps the engine stay in the peak power zone in those gears.

The transmission mods should go a long way in our quest to build a legit track/street car. Considering the Integra had a hard time putting the power down in the corners at Buttonwillow, the LSD should shave at least a few seconds off its previous time; factor in the new final drive, and I'm hoping that a low 2-minute lap time is possible. Beyond that, we'll focus on chassis setup before embarking on some power mods.

Photo 18/21   |   Drilling holes into carbon is always risky because it can cause unwanted spider cracks. To minimize the chances, always use tape. You'll only need to drill four holes to get the rear Type-R spoiler to fit.
*OEM glass weight: 24 lbs
SHARE ARTICLE 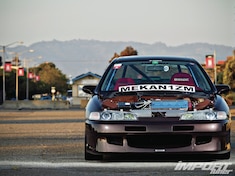 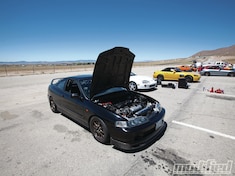 Project DC2 has been sitting idly in the garage for long enough that it must have started feeling neglected. With no more excuses on hand, I booked a Streets of Willow track event through Speedtrialusa.com. But then I realized I still had to replace my worn front lower ball joints with a set of Buddy club P1 Racing extended ball joints. Check out this edition of Project DC2 where the 1999 Acura Integra gets new ball joints, tires and rotors. - Modified Magazine 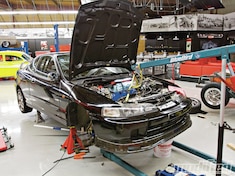 Project DC2’s K20 powerplant has been left internally untouched for the duration of this build because it’s been proven time and time again that it’s hard to beat the durability and reliability of Honda engineering. Keep reading to see what mods were done to the 1999 Acura Integra our Project DC2. - Modified Magazine 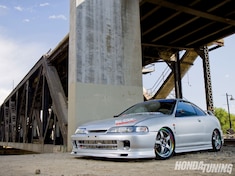 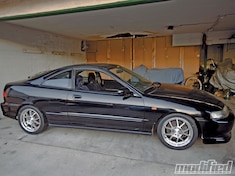 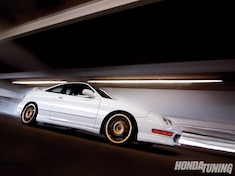 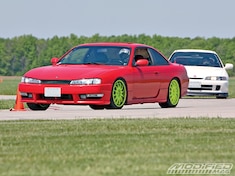 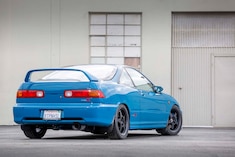