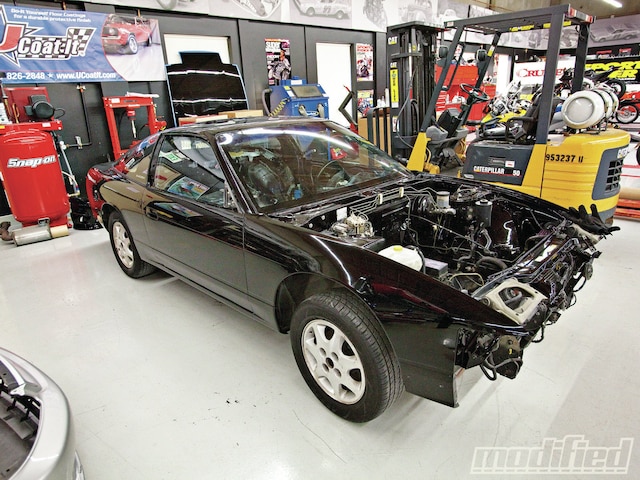 Finding a pristine stock S13 has become so difficult in the Southern California region that I gave up on the quest after a few weeks of digging around. Most, if not all, Nissan 240s in So Cal have been sitting outside for more than 20 years, and with that much sun exposure, it’s going to be far from mint (even if the paint is original). I knew any 240 that I purchased would need to be re-sprayed, so I focused on finding a straight and unmolested chassis to work with, and even that is becoming increasingly difficult to track down.

Luckily, I found the car that you see before you and jumped on it right away, despite the lackluster paint and non-running condition. It was in the process of being put back together, but because I planned to swap the engine, I could care less about its mechanical state. After some wheeling and dealing and an exchange of many Benjamins, this ’91 240SX found its way back to my office’s tech center, where I began to dismantle it in preparation for paint.

Since the game plan is to drop a GM LS3 V-8 into the engine bay, it would be good to get paint out of the way before any of the major assembly work would begin — although, there was the matter of choosing what I would do with the exterior before it would get sprayed. For me, the choice was simple: the JDM 180SX Kouki aero package. Its ’90s-era Japanese styling is really hard to beat, plus its OEM construction ensures a perfect fit and finish. I sourced most of the large parts (bumper, side skirts and lights) used from a friend and turned to Nissanparts.cc for the rest of the parts. Nissanparts.cc has a great selection of JDM OE parts, and I was able to get things — like the hard-to-find JDM reinforcement bar and rear valences — shipped to me within days after ordering them.

If you’re anything like me, then having your car painted is a stressful and anxiety-ridden process. A proper paint job (that doesn’t cost a fortune) is hard to come by, but finding a painter that will put the needed time and care into the job is even harder. I wasn’t looking for anything crazy, either — a factory Nissan black re-spray is all I wanted. At the same time, I didn’t want an orange-peel, Maaco special. After a lot of research, several recommendations and speaking with Francis Fabiculanan of Donlyson Auto Concepts, I knew they would be able to provide me with the service and results I expected.

Photo 2/11   |   Donylson Auto Concepts began by filling in all the dents and dings and smoothing out the large body panels.

Donlyson Auto Concepts operates out of Eagle Rock, CA, and is no stranger to high-end paint and custom one-off projects. When I visited the shop, there were plenty of cars that were in for serious makeovers, and I also had a chance to check out Francis’ personal Porsche 911 that has received the royal treatment in terms of body work and paint. He assured me that my car’s paint would come out looking the same way.

After dropping Project S13 off, I visited the shop several times to see how the progress was going and was relieved to see things were being done the right way. I had asked for the side marker lights to be shaved, and, unlike most body shops that would fill the holes in with bondo, Donylson welded the holes to ensure a smooth surface that would never crack. It’s these little details that tell me I chose the right painter.

When it came time to pick up the car and see the results, I couldn’t be happier. The mirror finish and shiny gloss of the new black paint is stunning. The S13 looks like a new car again, albeit one in pieces. My biggest fear, orange peel, was laid to rest when I walked around the car and found every panel was exceptionally smooth. The 20 years worth of dings and dents were all gone!

The only downside to having the car painted so early in a build is that I have to wait for the rest of it to come together before all the JDM aero gets installed. I’m eagerly awaiting the day that happens since I can’t wait to see what it will look like.

Francis Fabiculanan’s '79 Porsche 911
After ogling the Porsche 911 and its immaculate paint job, I knew Donylson Auto Concepts was the shop I wanted to paint Project S13. The Porsche’s paint is a by far one of the best and cleanest paint jobs I’ve seen to date.