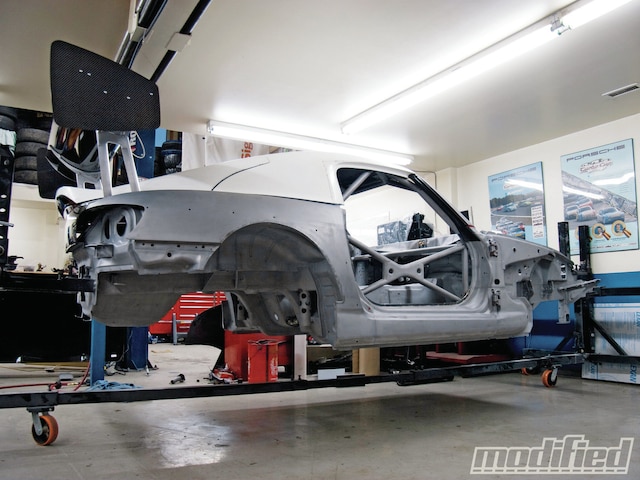 In our quest to maximize downforce, minimize weight and ensure all components feature adequate strength and stiffness, we’ve fabricated a chassis-mounted wing setup designed around DJ Racecars’ 203 series dual-element wing, coupled with Auto Analyser Performance wing uprights and a Challenge carbon-fiber trunk skin. While we had great results with the trunk-mounted APR GTC300 wing used on our original AP2 S2000 project, the lofty power goals and a substantial increase in front downforce warranted a slightly larger rear wing. With the increased downforce comes a drag penalty, which all add up to significantly increased loading on the wing mounts. The increased forces are the reason behind switching from a convenient trunk-mounted setup to a custom chassis-mounted setup.

The wing is manufactured by DJ Racecars from pre-impregnated carbon fiber (often erroneously referred to as dry carbon) to aerodynamicist Simon McBeath’s profile and design. While they offer more conservative single-element profiles, our S2000 has the power to push a high-downforce wing like the 203 dual-element wing seen here. The craftsmanship is truly first rate and the final product is nothing short of perfection. Wing width and upright spacing are made to order, as each wing is custom for its application. We opted for a 70-inch-wide element to match our vehicle’s total width. A wider element will result in greater efficiency by producing comparable downforce to a narrower element at less angle of attack and, consequently, less drag. The only downside is a slight increase in weight, and much wider than 70 inches will be difficult to get around to strap it in the trailer.

The Auto Analyser Performance wing uprights are a custom one-off set that feature computer-aided design and FEA (Finite Element Analysis) testing to make sure there’s adequate strength. Once again, McBeath provided input to help make sure the wing mounts allowed the wing to operate at its best. By opening up the wing mount’s centersection, there’s less disturbance to the critical lower surface of the wing element, especially when the vehicle is in yaw. This helps the generated downforce remain consistent during cornering. The uprights are machined from 6061 T-6 aluminum and feature streamlined legs to keep drag at a minimum. The main element is placed at roof height with the flap located just above the roof line. Finding the ideal height is a balance of finding free-stream air to allow the wing to operate as efficiently as possible, while ensuring the mass of the wing and its mounts aren’t increasing the vehicle’s center of gravity and roll inertia substantially.

The wing uprights are secured by four -4 AN (0.25-inch) fasteners to a custom 0.75-inch mild steel square tube arrangement that relies on the inherent strength of the unibody to transfer downforce to the tires. The tube structure is fully TIG-welded to the chassis, and only 1.5 lbs were added by following this approach. The mounting system is exceptionally stiff and has resulted in no perceivable deflection when pushing the car around by the wing. We then fitted a Challenge carbon-fiber trunk skin. This is truly a skin and requires custom mounting because there are no provisions for the hinge mounts or latch. This is exactly what we needed for our race application, and it resulted in a 14-lb saving over the original steel piece. By using carbon fiber and Kevlar sandwiched around a 0.25-inch core, the trunk has adequate stiffness to hold shape, and at just over 4 lbs, it’s as lightweight as it can get. We strategically placed the forward mount pins such that they are fully covered by the rear portion of our Spoon roof. The rear mount pins required an additional tube tied to the wing mounts that carry the posts. This serves to secure the trunk and the rear portion of the Spoon roof while, once again, keeping the mounting hardware concealed and out of the airflow to minimize drag. Two pockets were cut into the rear portion of the Spoon roof to allow access to the pins while also serving to help extract hot air from the vehicle cabin, improving driver comfort.

Photo 3/10   |   While some chopper builders on TV don’t bother, always wear proper safety gear when welding. The UV will burn your skin and damage your eyes even if they’re closed.

Finally, the cutout for the wing uprights was very carefully marked and cut with a 3-inch rotary cut-off saw. The cut-off was then trimmed and used to form the filler piece that’s attached to the body and fully covers the exposed portion of the wing upright/mount.

Photo 7/10   |   The completed wing and trunk mounting is light and stiff. By taking advantage of the inherent strength of the unibody construction the final product is substantially lighter than one that mounts directly to the framerail.

With our wing and trunk setup complete, we’ve achieved a substantial weight reduction and kept drag to a minimum while substantially increasing available downforce. However, perhaps the most rewarding aspect is knowing that the car will be able to be driven at 10/10ths without worry of a wing-mount failure entering a high-speed corner and the potentially disastrous results that can follow. 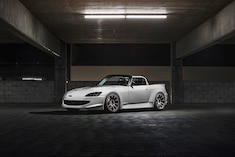 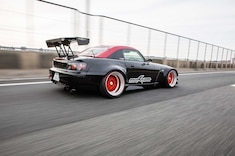 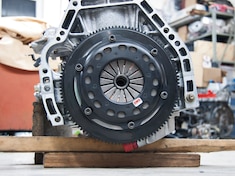 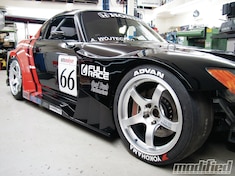