Engine bay prep and a rebuilt transmission are checked off the list. 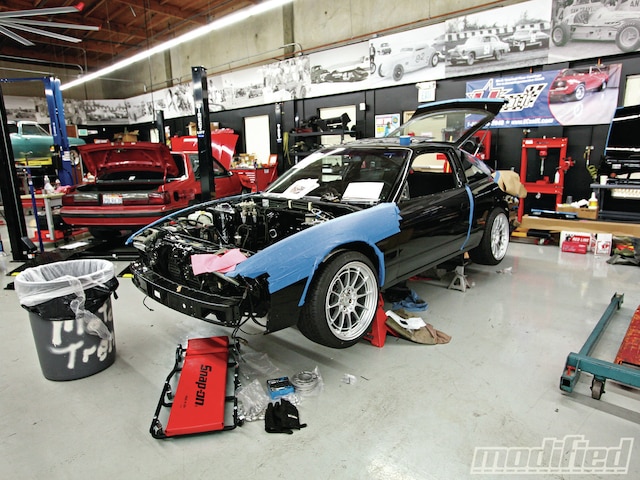 Prepping the engine bay for the LS3 powertrain requires a few key things to be done. First, the transmission tunnel has to be banged out to accommodate the larger T56 transmission. (A heavy mallet and a lot of muscle, combined with perseverance, go a long way.) Word to the wise, though — when you think you’ve banged the tunnel out enough, keep going. I learned that the hard way when I first tried to install the engine and had to pull the setup out to expand the tunnel some more. Sikky, which manufactures the mount kit, suggests about half an inch to an inch recession of the trans tunnel. It’s hard to gauge when you’re doing the job, but as I mentioned, when you think you’re done, hammer it more than you think is needed and you should be good.

If you’ve been following the build, you’ll remember that I installed a DeatschWerks 300-lph inline fuel pump that should supply adequate fuel for the LS3. However, the stock fuel lines have to be modified to fit a fuel pressure regulator, filter and fittings to mate to the LS3’s fuel system.

There are many ways to approach redoing the fuel system. I decided that going with a clean AN-fitting setup would be best because of the ease of making custom lines and being able to mount everything exactly where I want it. Fuelab supplied me with its black 515 Series fuel pressure regulator that’s compact and adjustable up to 125 psi. A 1.5-inch EFI fuel pressure gauge was also included to make adjusting and monitoring fuel pressure a breeze. I had high hopes for the Fuelab inline fuel filter that supports 200-gph flow and a 10-micron element to keep the fuel free of any debris; however, after weighing my options, the filter was just too big to fit in the already cramped engine bay and I had to abandon using it.

Photo 2/21   |   That beefy T56 transmission isn’t going to fit between those walls, so hammering out the trans tunnel is the only way to ensure adequate clearance.

In its place went an ultra-compact Earl’s fuel filter. Inside is a 35-micron element that should be adequate enough to meet the needs of my system. Since space was at such a premium, I cut the OEM hard lines at the firewall and placed Earl’s 6 AN aluminum tubing adapters so that any 6 AN fitting can be mated to them. For the actual fuel lines, black-colored (are you sensing a theme yet?) Earl’s Pro Lite Ultra hose was used in conjunction with varying Ano Tuff hard black anodized aluminum fittings. The Pro Lite Ultra hose is an extremely versatile piece that includes a black fabric outer shell with a steel braided and rubber reinforced inner tube that’s good up to 500 psi of pressure and withstands temperatures of -40 degrees to 302 degrees Fahrenheit. It’s also very flexible, making it ideal for custom applications.

The Ano Tuff fittings mate with the Pro Lite Ultra hose in rather simplistic fashion. Following Earl’s detailed instructions, the hose essentially screws into the fitting and seals as you tighten it up. Making such good-looking AN fuel lines has never been so easy.

As the photos show, I ran two AN lines up the firewall’s right side and mounted the Fuelab fuel pressure regulator on its protruding lip. You can see just how tight everything is — thankfully, the compact size of the Earl’s fuel filter enabled this setup to work out. Otherwise, it would’ve been back to the drawing board.

The fuel line inlet on the engine is on the driver side, so the AN feed line will run along the firewall, and with a slight bend and a 90-degree fitting it lines up precisely. GM uses a barb-style fitting on its fuel rail, and a quick-connect adapter fitting is used to convert that over to AN.

Photo 5/21   |   Earl’s Ano Tuff fittings and Pro Lite Ultra hose mate rather easily; a pair of wrenches and a bit of muscle are all that’s needed to build your own lines.

That about wraps up everything needed to ready the engine bay for the LS3. With the fuel lines in place and tunnel beat out, once the engine is prepped it should slide right in.

All About Gears
GM’s e-Rod crate engine package comes with everything needed to run, minus a transmission. Before you get your arms up, there’s good reason. GM doesn’t know what application you’ll be using its engine in, so the decision is left to you to source a proper gearbox. In my case, the tried-and-true T56 6-speed manual transmission from ’93–02 Camaros/Firebirds would be an ideal choice. Its length is almost perfect and places the shift lever just slightly ahead of the stock Nissan location, but more on that later. It’s also extremely stout and can put up with repeated abuse. Lastly, they’re plentiful and easy to find. However, sourcing a used T56 that’s in good shape can be an arduous process.

Photo 12/21   |   Rebuilding a transmission is serious business and takes good knowledge of the parts and procedures. RPM Transmissions takes all these small bits and pieces and builds a like-new T56 gearbox.

That’s why I skipped all the hassles of trying to find one online through the forums and turned to RPM Transmissions out of Anderson, IN. Right from the get go, their customer service was superb. RPM was kind enough to source a core for me and kept me updated during the rebuild process. I received RPM’s level V package that includes solid keys, bronze fork pads and shifter bushings, RPM modified 1-2 shifter fork and steel 3-4 shifter fork, performance metal micro polish and much more, all professionally assembled in-house. Even the trans case is media-blasted and painted to look like it’s brand new. This rebuild essentially provides me with an internally like-new transmission with beefed-up components.

Instead of sourcing an OEM bellhousing, I opted to upgrade to an SFI-approved Quicktime bellhousing. Built from high-grade steel and spun ensures that Quicktime bellhousing provide a shatter-resistant design that makes them ideal for high-rpm use. Not only that, the hardened steel bellhousing is up to 25 percent lighter than OE-moulded pieces and its compact shape makes for better clearance in the 240SX trans tunnel.

I had the housing shipped directly to RPM, where the crew installed and put the finishing touches on my transmission. When it arrived at the office, I was taken aback at how clean it looked. This was a new trans inside and out.

Without getting too far ahead regarding the buildup, I’m going to cover what shifter I chose even though it wasn’t installed until the engine and trans were in the car. It seems fitting to talk about it here.

As I mentioned earlier, the T56 is just shy of perfectly lining up with the stock OEM transmission tunnel opening. It’s a tad too short and while you can get away with using a stock T56 shifter, which will be set about a couple inches too far forward, there’s a better solution: the MGW shifter. It’s a precision billet-cut piece that has an offset shifter handle placing it smack dab in the same spot as the Nissan one. This short shifter also boasts quiet operation and precise shifting that I will cover when I can actually shift some gears.

There’s still a long road ahead to finishing this swap, but the light is beginning to show at the end of the tunnel.