Our Nissan 240SX gets a healthy injection of LS3 V-8 power. 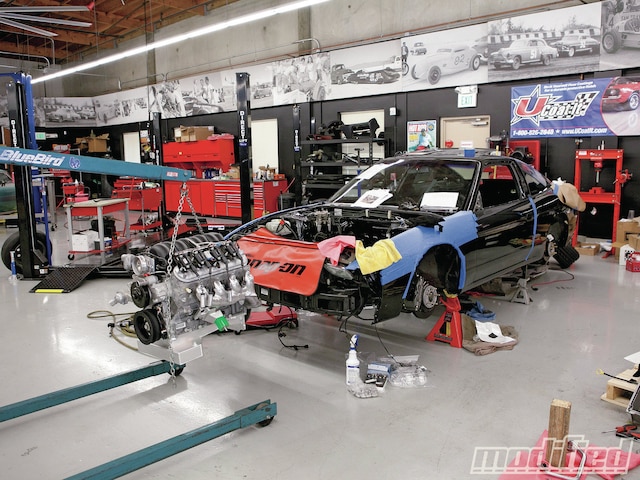 We last left off having finished up the better part of the interior, drive-by-wire pedal setup and beat the transmission tunnel in to make room for the bigger and beefier T-56 gearbox.

Before the engine and transmission could be mated together and dropped in, the LS3 needed an assortment of Sikky Manufacturing LS swap parts. Because of the stock LS3’s oil pan design, there’s no chance it will fit with the S13’s subframe — that’s where Sikky comes into the picture. The company has spent many hours researching and developing all the necessary parts to mate almost any GM LS V-8 engine into your 240SX. Sikky is by far the leader in LS-swap components for the S-chassis, and its parts are built to withstand constant abuse both on and off the track.

I’m always a bit nervous changing oil pans to aftermarket ones because of the worry that the oil pickup may not be in an ideal place or the pan itself isn’t built up to spec, but after installing Sikky’s V3 aluminum race oil pan, all my fears were put to rest. The pan features proper baffling and trap doors to prevent oil starvation, and the aluminum mating surface has been CNC cut out of half-inch-thick material for superior rigidity and sealing. Included with the oil pan is a remote oil filter setup that I’ll mount later.

There are some modifications that need to be made before the Sikky oil pan can be installed. First, the OEM dipstick hole has to be plugged because the new oil pan has a different location for it. Secondly, a small portion of the windage tray has to be trimmed to ensure adequate clearance for the new pan. Once it’s off the engine, it can be quickly trimmed with a cut-off wheel. A new Sikky-supplied oil pickup is last to go on before the oil pan and new gasket (also included in the kit) can be installed.

One of the main reasons I chose Sikky for my swap parts was its engine mounts; they’re CNC machined out of solid aluminum, making them extremely strong and durable, but it’s the design of the urethane bushings that sold me. They provide true isolation of the motor from the chassis, meaning you’ll get very little engine vibration transfer into the chassis, ideal for a street car such as this.

Photo 5/21   |   Using a thread tap and the Sikky-provided hex nut, the factory oil dipstick provision is blocked off since it won’t be used with the new oil pan.

The LS3 e-Rod package doesn’t come with a clutch, so you’re left to source one on your own. I chose SPEC clutch’s Stage 2 setup that’s rated to 645 ft-lbs of torque. It features a full-face pure Kevlar disc and a double-sprung hub for superior driveability in all types of conditions, whether it be in stop-and-go traffic or flat-out at the track. Mated to the clutch is a precision-cut SPEC steel billet flywheel that guarantees to have a perfectly flat surface. Some of you may be wondering why an aluminum flywheel wasn’t chosen — that’s because a steel unit is preferred for the street, while an aluminum one is better for the track.

With the clutch assembly in place and GM slave cylinder with Sikky clutch line installed onto the input shaft of the fully rebuilt (care of RPM Transmission) T-56, it was time to mate the two together. As with any transmission installation, there’s a lot of shaking, wedging, pushing and sometimes cursing before the input shaft slides completely into place. My only advice is if it’s not going on, spin the input shaft a couple degrees and try again since that’s usually where it’s getting hung up.

Photo 6/21   |   Sikky’s 7-quart, baffled aluminum oil pan is made to clear the stock S13 subframe and sits just slightly above it to protect the oil pan.

Another added expense that you’ll have to shell out for is the GM Performance Parts accessories package. It includes everything from the power-steering pump to the air conditioning, to all the belts and brackets. There are several different configurations for this setup, but the CTS-V belt arrangement is the best for the S13 since it’s the slimmest and doesn’t place accessories past the hood line.

Photo 7/21   |   MSD's Advanced Power System Starter is an ideal choice for a swap such as this. It's more compact than the OEM unit, but with just as much cranking power and can be clocked to fit a variety of positions.

The last item to be installed before the drivetrain could be dropped in was an MSD Ignition Advanced Power System starter. Smaller than an original GM starter, the APS starter is perfect for tight spaces such as our application and can be clocked in different positions to help clearance. It also utilizes a 3hp motor and two ball bearings on the pinion gear for smooth, quick engagement.

Dropping the LS/T-56 combo into the S13’s engine bay would prove to be a 30-minute affair and not much more difficult than, say, an SR20 setup. The other alternative is to drop the subframe and bolt the engine onto it and come from below. Unfortunately for me, I had to endure both methods as I found out the hard way that I didn’t bang out my transmission tunnel enough. I had to drop the entire subframe and weasel my way underneath to bang out the tunnel some more. After doing so, the trans cleared with about an inch to spare.

Sikky’s engine mounts position the engine as far back as it can safely go without touching the firewall, and the rear transmission mount (with bracket) bolt up to the factory mounting holes for an easy install. But before the transmission was set into place, an MGW offset short shifter was installed (refer to Dec. ’11 issue, “Going the Distance” for full info on the shifter).

The last piece of the puzzle was the driveshaft, where Sikky once again came through with its one-piece, all-aluminum unit that’s a bolt-on application. Slide it into the transmission, tighten four bolts on the differential side and that’s it — the new drivetrain is in place.

Photo 9/21   |   Looking for a quality, built-to-last engine mount? Look no further, these Sikky mounts are guaranteed for life and built to absorb engine vibrations.

We’re about halfway through this build, but most of the complex work has been checked off. In the coming months, you can expect to see the engine bay starting coming together, a custom exhaust being built and the engine getting wired. Then it’s off to CARB for approval. I have every intention to ensure this engine swap is legal in the state of California.