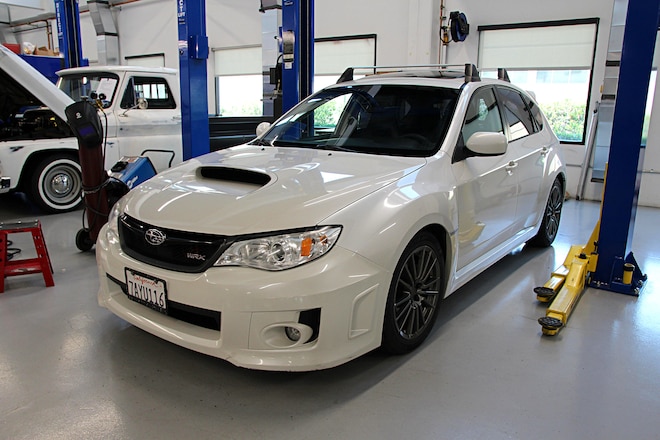 The lifted Subaru scene is a mixture of import culture and the growing so-called "overland" culture: taking the world's best AWD technology and putting it to effective use in the off-road environment in which it was engineered. This trend is a hard contrast to the current status quo of the import scene where slamming cars beyond function is seen as the norm. The now discontinued hatchback and wagon body-styles of Subarus, particularly the WRX/STI models, make them an ideal starting point to build a fun, fuel efficient, and reliable home away from home. 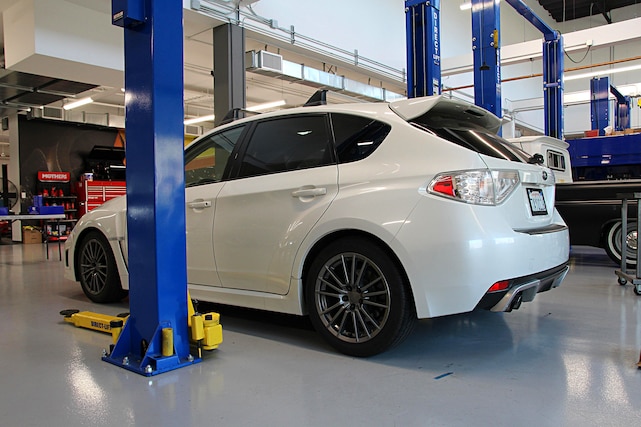 In short, we are giving a 2013 WRX hatchback a bit of a lift, a more aggressive tire, and some off-road accessories that both increase its functionality and toughens up the look. Sure, we could take this to the extreme by splicing a WRX chassis with that of a truck with solid axles and tons of travel (it's been done). This however, would defeat our ultimate goal. We mean to take advantage of the car's AWD performance and unlock it in an attainable way for the weekend adventurer. We aren't touching the engine expressly to maximize its reliability. The last thing we want is to accelerate wear and tear on the power plant and have it fail while out in the sticks. We'd rather spend more time out exploring than worrying about when the main-bearings are going to go. 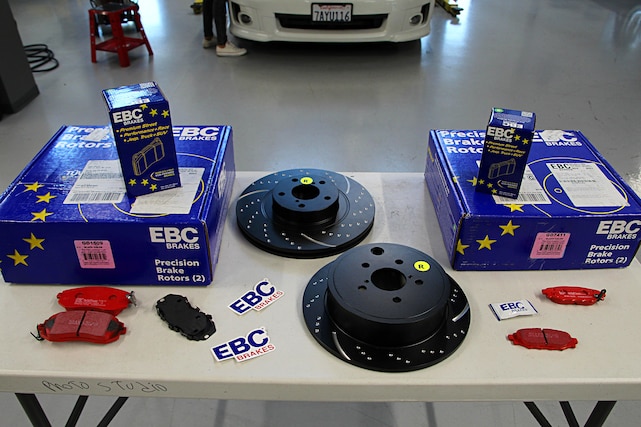 As the title of this chapter suggests, we're starting with the binders first, tapping longtime Super Street partner EBC to help us outfit our GR chassis hatch with fresh pads and rotors. EBC's Redstuff brake pads are engineered for hot hatches with drivers who engage in "spirited" street use. We don't know how much of that kind of driving we'll be doing off road, but we appreciate the peace of mind that once we return to paved surfaces we'll be able to rein in the car. EBC recommends pairing up its Redstuff pads with its GD rotors; the GD rotors feature dimples and slots to draw air into the brake contact area and reduce temperatures in an effort to prevent brake fade, we're told. EBC says it's able to achieve cooler rotor temperatures with its dimple design without compromising the rotors' structural integrity (as in the case of drilled cast iron rotors). Additionally, the GD rotors come in a painted "bedding" finish that gets worn off the contact area as they're used. 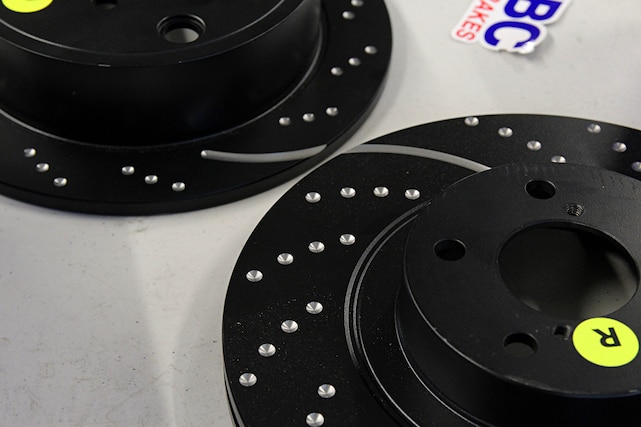 A couple more things we should point out before putting hands on car: first, the EBC rotors are directional, so you want to make sure not to mix them up. The fronts versus rears are a little easier to keep straight, as the forward discs are vented, whereas the rears are not. Second, the pad sets come complete with shims and brake lubricant packets—lube that should be applied to the back of the pads and mounting tabs as well as the caliper bushings and pins. 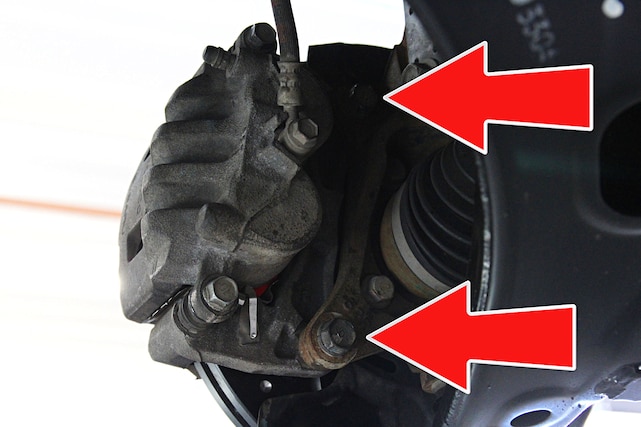 The first steps are to uncap the brake master cylinder reservoir in the engine bay, raise the vehicle on stands or a lift if you have one handy, and pulling off the wheels for access. Removing the rotors means first pulling off the calipers, which must be unbolted from the knuckles; for this, you're going behind the knuckle and unscrew the bolts that secure the calipers in place. 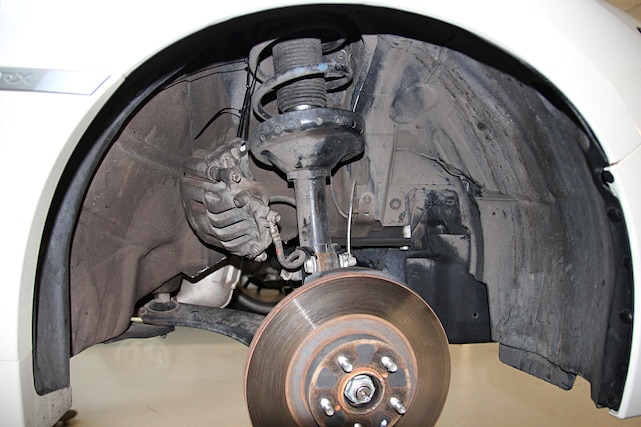 Once the caliper is free, it's best to hang it up out of the way somewhere nearby, like we did stringing it up on the suspension spring with a zip tie. You should avoid at all costs allowing the caliper to just dangle at the end of the brake line, which could easily tear.

With the binder out of the way, the rotor can be removed. This generation WRX sports front and rear rotors with two smaller threaded holes in addition to the five holes for the lug studs to pass through. We used a pair of properly sized bolts in those little holes to gradually push the rotors out and ultimately separate them entirely from the hub. The EBC GD rotor is installed in reverse order of removing the old disc (minus the bit about using the small threaded holes) and then the caliper is remounted to the knuckle. 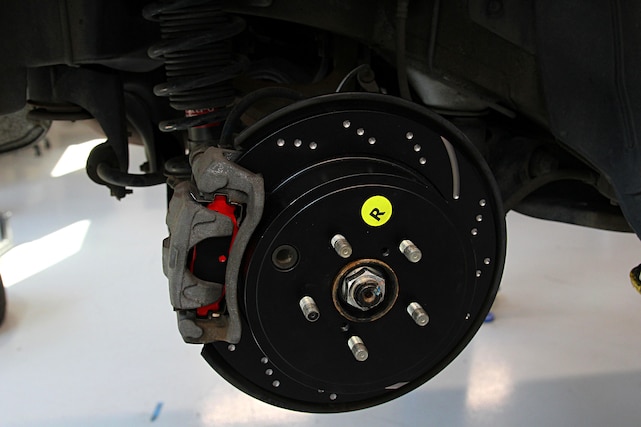 The rears are only slightly different, as again they are non-vented, plus the parking brake is actually a drum brake behind and inside the rotors. Before beginning on these you'll need to make sure the parking brake is not engaged, otherwise the rotors are nearly impossible to remove. Furthermore, the rear rotors each have a drum brake adjustment hole that's plugged by a rubber dust cover; make sure to pop those off and move them to the replacement rotors. 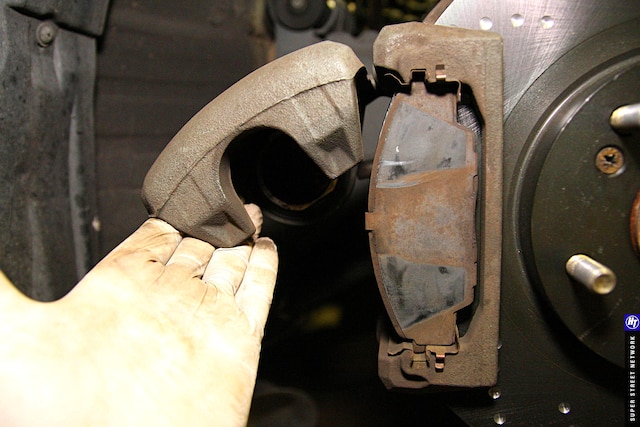 (Editor's note: somehow we completely spaced getting photos from this part of the install; luckily, many cars from Japanese automakers share similar tech, so this image and the next are from a previous EBC brake install on an Acura RSX—same principle, different car.) To swap out pads, you're basically unbolting the lower pin on the caliper, again from behind the brake, and backing off slightly the upper pin (there's really no need to completely remove that part of the caliper). Once you do this, the caliper should swing up and there should be more than enough room to pull out the pads. 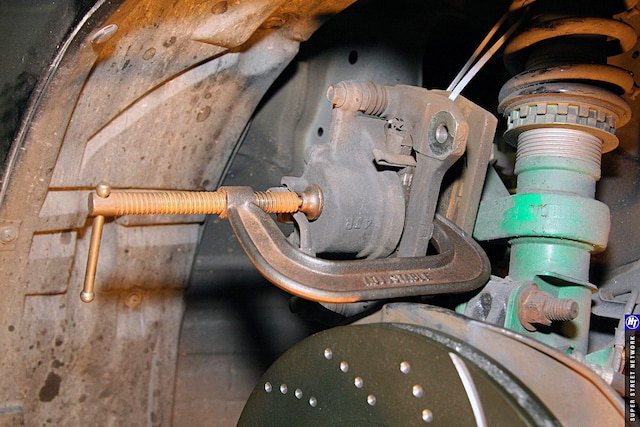 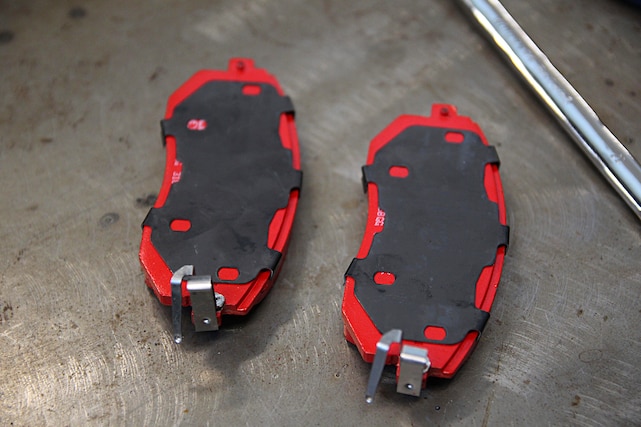 With the old pads out, the piston in the caliper will need to be pushed back into its housing in order to accommodate the new, unworn pads. This can be done with a C-clamp big enough to fit over the caliper. Once you have clearance, the fresh pads with shims (provided by EBC) can be fitted into the caliper bracket, and then the caliper itself swung down and re-bolted in place.

A few last words about this upgrade; new pads and rotors means bedding in those bad boys—EBC has the entire process outlined on its website. Finally, while it's highly unlikely to happen, it's probably a good idea anyway keep a shop towel around the uncapped master cylinder reservoir in the engine compartment in the event of brake fluid spillage. If, as in this case, your brakes were near the end of their lifespan, there's a good chance the reservoir probably looked near empty when you started. Pushing in all those caliper pistons sends fluid back up into the reservoir (which is why you keep the lid off during this kind of brake work), and it's possible some could end up spilling over the side. Better to be safe than sorry and bust out one of those brake master cylinder reservoir "socks" you rocked in your engine bay circa 2000.