Super Street Just Added Another Project Car To Our Fleet 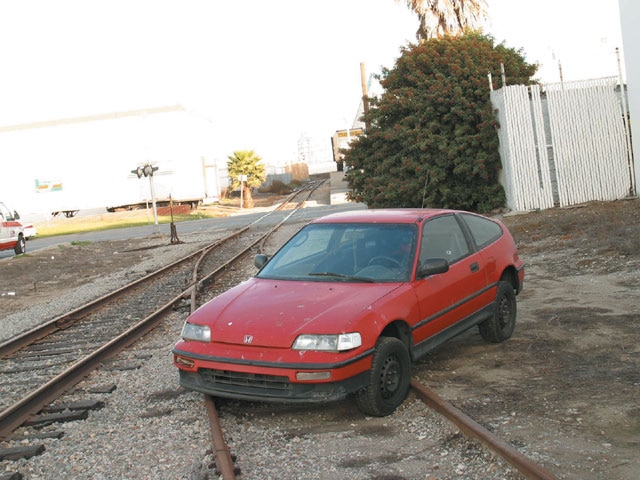 You might be wondering why we're forcing you to stare at this dirty heap of a CRX. What are we thinking? Is this a joke? What's the deal with all the bird crap? Why does it look like a 4x4? Did we steal this from a scrap yard? This isn't the typical car that you would see in Super Street. You sent in letter after letter begging us to turn your car into one of our projects. You know, let us build your motor, paint your car, and make it as pimp as can be. As tempting as that offer may be, we had to pass. So what exactly are our intentions with this car? Sit back and relax while we fill you in on the details of our project. Trust me, you'll get really excited for us. And if you don't, you're probably not an interesting person.

You've seen those stupid daytime shows doing geek-to-chic and zero-to-hero makeovers, right? Well, this is our version and we're going to take a fairly affordable import car and build the hell out of it. That's why we started with a bottom-of-the-barrel beater-a '91 Honda CRX HF. Spend a couple weeks looking around and you'll be able to find a CRX of your own for around $2,000, or even $1,000 if it's in this condition. But price isn't the only reason we chose an EF8 chassis. By now, everyone should be aware that the CRX is an extremely light car even with all the bird droppings. Another factor that we took into consideration is the availability of parts. Although many companies are focusing their attention on parts for Nissans and Toyotas, there are still tons of aftermarket parts available for Hondas. This particular CRX used to belong to Super Street's own Special Events Administrator, Jason Dienhart. Some of you might recognize him from being Jojo Callos' crew chief a few years back and others will just know him as the tallest Mexican in Huntington Beach. Jason's share of Honda knowledge mixed in with the Kozuleh brothers' (of Twins Turbo fame), my experience in building cars, Jonny's mixing skills, and Nads' unibrow left us with a pretty hefty task on our hands. That's right, we actually plan things out on our four-hour lunch breaks and two-hour mandatory after-lunch meetings in Nads' office. Well, JD, guess what? It's gonna be ours pretty soon, sucka! Our final goal is to have an all-around daily driver/track car that people won't laugh at. By all-around, we mean autocross, drag race, and any other motorsports activity. That's what a lot of people aim for since it's not practical for everyone to have one daily driver and build a trailer-only race car. The future performance aspect of this car will prove to everyone that we're not just about show cars. In fact, when we're done, Jason is throwing the gauntlet down to any project cars from other magazines. Oh yeah, ours isn't an automatic, just so you know.

As always, we're not going to tell you the details until the last possible minute. That works out for us in two ways. First, it leaves you guys hanging and keeps you reading to see how the car turns out. Second, we're not exactly sure what we're doing either since we wrote the outline on the back of a napkin and Roel spilled balut juice all over it. Just kidding. Jonny actually spilled his hand lotion on the list so nobody wants to touch it. But keep your eyes peeled for a series of performance build-ups on this car such as a hybrid B20B VTEC motor swap and full suspension. Don't worry, we're still going to work on the exterior of the car and we're going to let you get involved in our project as well. When the time comes, we're also going to let you readers choose the future color of our CRX. You can log onto www.super streetonline.com and select from a series of factory Honda colors. Whichever color gets the most votes is the hue we're going with. See how we don't exclude you? As you can see, we have our work cut out for us. Of course, this whole project can't begin until we take over and that's not going to happen until Jason gets off his lazy ass and gets a car wash.