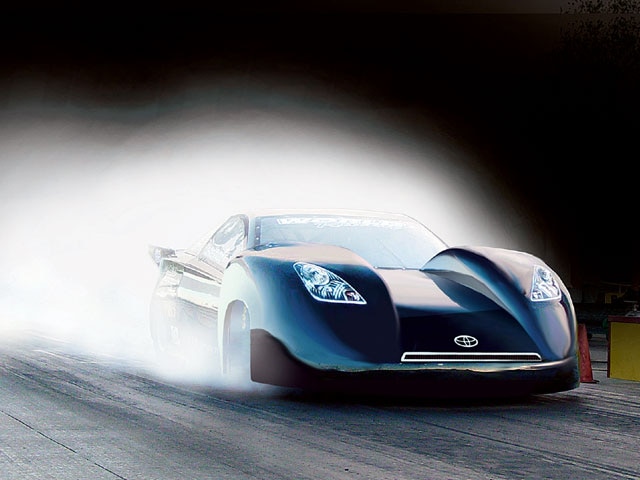 As many of you are aware, in the last few months I've been designing and developing a new Pro-FWD car for Christian Rado. This has been a dream project for all concerned. It's a chance for us to push the boundaries and create a truly revolutionary car that will spearhead a new generation of faster and safer front-wheel-drive racecars.

Chris Harrington's series of articles about the development and construction of the 2004 NORAD Toyota Celica reveal the radical nature of the new car. We're building it to the limit of the rules. Before a wrench was lifted, we examined the rulebooks of the NHRA and NDRA to ensure the new design would play by the rules. Work on the project started in August 2003, and construction is planned to be completed before the new year.

Just as the project was progressing nicely, we heard the NHRA was thinking about making a series of changes that would basically outlaw the new car. At the SEMA show in early November, meetings with NHRA officials shed very little light on what the changes would be.

On November 20, the NHRA announced the rule changes on its Web site. Unsurprisingly, the rules had been changed to address every one of our new car's radical developments....

To make the impact of the changes clear, here's a rundown of our car's design:Now for the NHRA rule changes:

- "Center-driver position prohibited. Driver must be located completely to the left or right of vehicle centerline."

- "DOT or racing slicks permitted with a maximum width of 11.5 inches and maximum height of 31.0 inches. Maximum rollout on drive tires 99 inches."

According to the NHRA rulebook, "In the interest of maintaining 'stock-bodied appearances' of Pro FWD vehicles, NHRA is currently evaluating body dimension guidelines and methods of enforcement. It is strongly advised that any new Pro FWD vehicles under construction should be held as close to stock dimensions as possible. In particular, oversized 'bulges' or 'humps' on front fenders are prohibited. Final approval rests with NHRA."

In one foul swoop, the entire car was banned, and months of work have been wasted as well as a substantial financial investment. After getting over our initial shock, we decided we'd already gone too far and would finish the project anyway. We'll race the new car with the NDRA and hopefully the other sanctioning bodies will realize this is the way forward for FWD racecars. Chris Rado's 2003 Celica racecar will be reworked with the same spec engine, transmission and clutch as the new car and it'll compete in the NHRA series.

At the end of the day, it will be more than competitive, even without the new developments we've been working on. Yes, it's a lot of work and a lot of money, but it's what we have to do.

At least we still have a venue with the NDRA to showcase the new car. It could have been worse; we could have spent the time, money and resources for absolutely nothing.

Hopefully, the rules will remain unchanged for a couple of years. This will give all of the racers a chance to develop the equipment and add some stability to the class structures. I understand our sport is new and still evolving, and changes are made with the best intentions, but without a stable rule book, it's impossible for us to develop and make practical improvements to the racecars.

Banning BobWe're re-running last month's Banning Bob segment with the photo that was supposed to go with it. Enjoy.

My altered Ferrari 308 BB was probably one of the wildest racecars I ever constructed. With a chrome-moly Pro-stock-style chassis, powered by a blown, flat-twelve Testarossa engine, it was slightly off-the-wall for the powers that be.

It wasn't the car I chose, as unusual as it was, or the fact that I was running a twelve cylinder, 5-liter engine against the domestic V8 crowd.

What really did the trick was my choice of supercharger.Back in 1991, the only practical off-the-shelf solution was a Roots-type blower. I was convinced there had to be a more efficient way of generating boost for my 12,000-rpm Ferrari engine.

After spending a lot of time looking at my options, I decided to create my own answer based on a massive 118mm Holsett turbocharger that would be mechanically driven rather than driven by the spent exhaust gases.

I fabricated a gear drive system that spun the turbine up to 85,000 rpm and the end result was probably a forerunner to today's popular centrifugal supercharger systems. The system generated around 50 to 60 pounds of boost and was a perfect match for the high-revving boxer engine.

When I turned up with the car at the races and ran a 7.02 E.T. on a 7.50 record, the NHRA decided to outlaw anything but Roots-type blowers and it also decided it didn't like my air-water intercooler system.

The new rule changes made the project a dead duck and the car still gathers dust in my storage unit today.

- Center-drive driving position. For safety reasons we built the car as a center drive. It provides better visibility for the driver and better protection in the event of an impact.