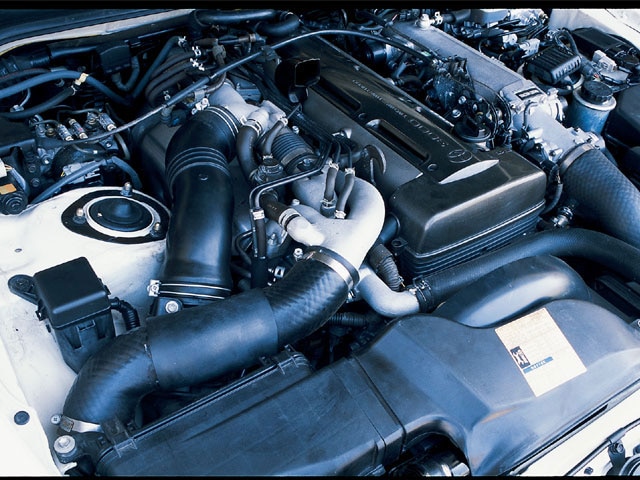 In Part 1 of Project Supra, we tackled our slipping clutch with a brand-new Centerforce unit, and so far the unit is working fine. The more miles we put on this clutch, the better it seems to get. This month we see how the Supra responds to a few upgrades, but first we need to replace our worn tires, get an alignment, change the spark plugs and get a compression check.

The car's wacky alignment wore out the front tire, so we ordered a fresh set of Bridgestone S-03 tires. We opted for tires one size wider than stock in both front and rear - a 245/40-17 and 265/40-17, respectively. The size increase shouldn't upset the handling except for a little extra grip in all four corners, and it should help with straight-line grip and reduce braking distances. The techs at Big O Tires in Redlands, Calif., mounted and balanced our Bridgestone tires and properly aligned the Supra.

The factory manual for the Mk IV Supra states that a compression test should show a variance of no more than 14 psi between all cylinders. Unfortunately, cylinder 4 was down 20 psi from the rest, while the other five were within 8 psi of each other. This doesn't signal a red flag now, but we'll probably do a cylinder head rebuild in the near future.

The final step before adding horsepower was to check the spark plugs. Sure enough, the stock Denso plugs were clearly worn out. We ordered a set of Denso Iridium I-22 spark plugs from Monarch Products through its Web site. Priced at $12 each, the change in spark plugs alone made the car run remarkably smoother, especially in the higher rpm range, without any misfires.

Armed with the proper running gear to get some affordable upgrades going, it was time to get busy at the dyno.

Advanced Engine Management Systems in Gardena, Calif., helped us by making arrangements with RD Dyno to use its Dynojet 248C dynamometer. A well-known manufacturer of high-end engine products ranging from adjustable fuel pressure regulators, intake systems and cam gears to its very popular and programmable engine management systems, AEM has been a major player in the import automotive market over the last several years.

After the car was strapped down, a fourth-gear pull registered 264.2 hp at 6250 rpm with a peak torque measurement of 234 lb-ft at 5000 rpm. Although it's a notoriously conservative dyno, AEM's Jason Siebels (whose Mk IV technical know-how got us through the day smoothly) felt it was still slightly lower than expected. His first impression was that the computer had registered a knock at some point in its life and has since kept the timing and fuel maps conservative. He unplugged the two fuel injection system fuses and waited a couple of minutes before plugging them back in. "This will reset the ECU so that it doesn't pull back so much timing," said Jason.

The fuses went back in, the car was fired up and as the wheels began to accelerate the rollers, a slightly different animal awoke, registering 275.5 hp at a much earlier 5700 rpm and a whopping 262.7 lb-ft of torque at 5000 rpm. With a gain of more than 30 lb-ft of torque in various parts of the rev range simply from resetting the ECU, the owner was pissed he hadn't thought about this sooner.

One of the best bang-for-the-buck upgrades is a decent intake system. For $210, the HKS intake system consists of a filter that features HKS's Super Lip funnel and Super Honeycomb frame, which helps to create a vacuum area on the back side of the lip. HKS claims its filters have the possibility of flowing as much air as the larger filters without taking up so much room, thanks to its relatively small size. HKS has also paid special attention to the absorption performance by using a high-adhesion moisture-type polyurethane filter. In the end, you get a filter with high filtration and limited drops in pressure. The filter was installed while the car was sitting on the dyno. The install was simple and replaced the factory air box. At 283.5 hp to the wheels, the peak number went up by 7.8 hp but the area under the curve told the true story-gains from 5800 to redline were significant, including a peak gain of more than 20 hp at a flattened 6600 rpm.

Next up was the exhaust system. In our Supra exhaust shootout a few months ago (Turbo, June 2003), the Thermal Research & Development system did extraordinarily well, increasing that stock Supra's peak power by 11.4 hp and 20.4 lb-ft of torque, with a peak gain of 28.1 hp at and 31.7 lb-ft at 4650 rpm-right in the middle of that second turbo's spool-up. Although it was a little louder than the average aftermarket exhaust for the Supra, the extra power was what we were after, and the 6-pound weight loss didn't hurt, either.

We procured a system for Project Supra, but this time we tested it with a turbo downpipe system from Stillen. By replacing the stock cats, which are the biggest bottleneck in the exhaust system, massive backpressure is eliminated for better flow. It's also 15 pounds lighter than the factory cats. It should be noted, however, that any cat-less downpipe is intended for racing purposes only, and shouldn't be used on a public road (but that didn't mean we couldn't test it on the dyno).

On the dyno, we weren't surprised by the new numbers. With the HKS filter, horsepower shot from 283.5 to 311.7, but with a much smoother curve to boot. The total weight loss over the factory exhaust was 21 pounds.

For just over $1,200 in mods plus a couple of hours worth of installation, the car netted substantial gains from 5000 rpm up-basically when the second turbo is at full bore, with power increases ranging from 10 to nearly 50 hp. Keep in mind this is using the 275-hp run as our actual baseline, otherwise our actual gains on this particular car, including pulling the fuses to reset the ecu, were more like 60 hp near redline. At least in the case of Project Supra, that was the change in power we saw from this morning to this afternoon.

Next time we'll shoot to unleash a few more ponies, so we bumped the spark a bit more to avoid any misfires the next time the car is tested. The HKS Twin Power DLI system incorporates both the CDI and transistor method ignition to provide optimum spark duration and maximum voltage output. According to HKS, this results in a smoother throttle response and powerband.

The CDI method (Capacity Discharge Ignition) provides maximum voltage by transferring all stored energy in the capacitor to the ignition coil so that the ignition current can build up quickly, thus making the Twin Power more effective in the higher revs where a normal spark would tend to diminish. The combination of the CDI and the transistor method incorporates two distinct systems into one high-performance unit, hence the designation of Twin Power. HKS reports the Twin Power produces a spark output that is typically 1.5 to 2.5 times stronger than that of the stock ignition system and consumes about 35 percent less power input than other ignition amplifiers. The DLI also has a CARB number, making it 50-state legal for public roads, and has an MSRP of $625.

The DLI unit was tested against the previous runs, but showed no changes in power, indicating that at least at this power level the stock ignition system with the Iridium spark plugs is holding up. Jason assured us that from his experience in testing these Supras, the DLI system will come in handy when we decide to turn up the boost.

Stay tuned, we'll be seeing just how much better this car does with a stand-alone engine management system and some other toys.