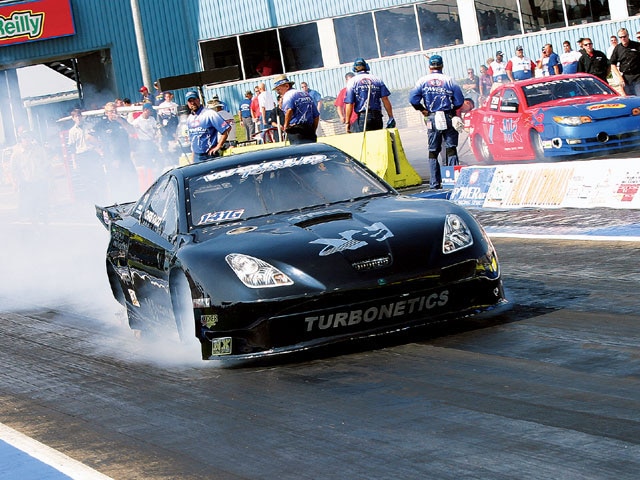 In the 2003 season, many top-flight teams struggled to keep their transmissions in their cars. Project NORAD has a unique solution to the transmission problem-a Lenco five-speed planetary unit that's almost bulletproof. We discussed the transmission, slipper clutch and V drive in the installment on page 118. Here, we research the rest of the driveline.

In keeping with Bob Norwood's "break it if you can" philosophy of racecar construction, the 2004 NORAD Celica features some time-honored ways of harnessing the horsepower that the over-achieving Toyota 3RZ will generate.

"The key consideration for us was the strength of the driveline," Norwood explains. "If I had a dollar for every driveline failure we had in the past couple of years, I'd be kicking back on a Caribbean island with one of those fancy umbrella drinks in one hand and the other wrapped around a bikini-clad goddess. Unfortunately, here I am trying to engineer a 'Rado-proof' driveline that'll get the car down the track every time."

Norwood decided on a solid rear end to transmit the power to the front wheels. He wanted to eliminate the weaknesses and utilize a true four-link suspension, so the Ford 9-inch rear end was a natural choice. Then he had to make it work within the application, taking into consideration suspension travel, steering, CVs and driveshafts, among other things.

The NORAD team consulted with the drivetrain experts at Mark Williams Enterprises, which has a long history in drag racing and a complete line of top-quality components. Norwood chose a number of the Mark Williams components that meet the strength requirements he was looking for, but some were modified by the NORAD team to meet their exact specifications.

First the team needed to get the drive from the Vee-Drive forward to the rear end (front end?) assembly. Mark Williams had the answer in the form of a solid 4340 heat-treated steel driveshaft. The driveshaft is more than capable of dealing with the horsepower that will be generated by the 2.7-liter Toyota 3RZ engine and it's attached by 'Quick release'-tempered 4140 steel couplers at each end.

The shaft is located within the couplers by custom machined aluminum lock rings. Changing the shaft is simply a matter of loosening the lock ring screws and sliding the shaft out. It's fast, simple and effective.

The (Front) Rear End
Norwood's design called for a solid front axle assembly. This new approach to a front-wheel-drive racecar called for some innovative thinking by the NORAD team. A Mark Williams 9-inch Ford casing (with massive external bracing to minimize flex) was mounted upside-down over the top of the transmission spacer that separates the clutch and bell housing from the Lenco transmission.

The spacer assembly allows for enough clearance for suspension travel, while the car still meets the minimum ground clearance rules. Even with the spacer in place, modifications had to be made to the casing to allow everything to clear. "I had to chop about an inch from the bottom of the center housing," Norwood says. "Once that was done, I machined the ring gear to allow it to pass through the smaller hole, and the pinion support was machined to allow it to mate perfectly with the modified casing." The casing was further modified with the addition of an oil filler/inspection port and a bracket for the transverse locating rod.

The gears are Richmond 9310 Pro-spec and the rear-end ratio is 4:86, although with the gear reduction built into the Vee-Drive assembly, the final-drive ratio computes to 5:40. This gearing allows for a theoretical speed of 203 mph at 11,000 rpm.

Finally the ring gear was machined by Tommy Todd to shave off a few valuable ounces without compromising the strength.

The team was able to keep the weight of the axles to a minimum as well, thanks to Mark Williams Enterprises' Ultimate Hi-Torque Axles.

These axles represent an all-out effort by the Mark Williams engineering team to reduce reciprocating weight. These 40-spline axles are gun-drilled to 1 1/16 inches and are also extensively lightened behind the axle flanges. The profiles of the axles are changed and the weight saving is 36 percent over a standard gun-drilled axle.

The rear-end assembly is located by way of the adjustable four-link tie-rods and an adjustable transverse tie-rod that keeps the whole shooting match perfectly in line.

The final part of the puzzle was turning a solid axle rear end into a steerable FWD system. Norwood's answer is simple. "We had to use some kind of CV joint to allow the drive to be transmitted through the steering axis. What CV would be capable of dealing with the loads that our big tires would subject it to? Last year I saw lots of cars break CVs."

Norwood's search took him to the twilight world of off-road V8 buggy racing. He found the answer in the form of massive Series-30 CV joints. These monsters are huge compared to what's currently in use in the sport compact drag racing world.

Before the CVs were installed, Norwood disassembled them and spent considerable time lightening the outer casing on the lathe. "I don't expect to see any problems with these CVs, even after the lightening treatment," he says. "They're massively overbuilt."

With the transmission power problem solved, the next issue was steering. Norwood and his ace machinist Tommy Todd concocted an upright assembly carved from billet steel on the CNC machine in two sections.

The inner section is welded to the end of the rear-end casing tubes. The upper and lower arms of the inner section are fitted with sealed bearings, and the outer upright/hub assembly bolts directly to these. A custom machined billet-steel stub-axle transmits the drive from the CV to the hub. This assembly places the steering axis as close to the centerline of the tire as possible to keep torque steer to a minimum. The steering rack is mounted directly to the rear-end assembly to minimize bump steer.

Todd spent the best part of three weeks machining these parts from massive blocks of steel.

The man-hours spent on machining one-off parts for the NORAD Celica have been many, but the end result is an incredible testament to the vision of Bob Norwood and Christian Rado. This machine was engineered with one thing in mind: performance.

Norwood's team developed a unique approach to solving the problems of transmission reliability and functionality. The NORAD slipper clutch system should allow the team to dial-out tire shake. The Lenco air-shifted five-speed is extremely strong and shifts gears smoothly and quickly. The V drive, driveshaft, rear-end assembly and CV joints should be more than strong enough to cope with the punishment that Rado will throw at it. But Norwood is keeping his feet planted firmly on the ground at this stage.

"We put together a package that's very different from any others out there. I'm not saying this is the only way to go, but it should be an answer to many of the issues that have been stumbling blocks in the Pro FWD ranks." The really hard work will begin when the team track tests the car. They've got a lot of new and different ideas to evaluate, and it's going to take a significant amount of track time to dial it all in.

Our next article in the NORAD Pro FWD series will feature the design and construction of the chassis. It'll be radical, unique and superbly engineered. Stay tuned.