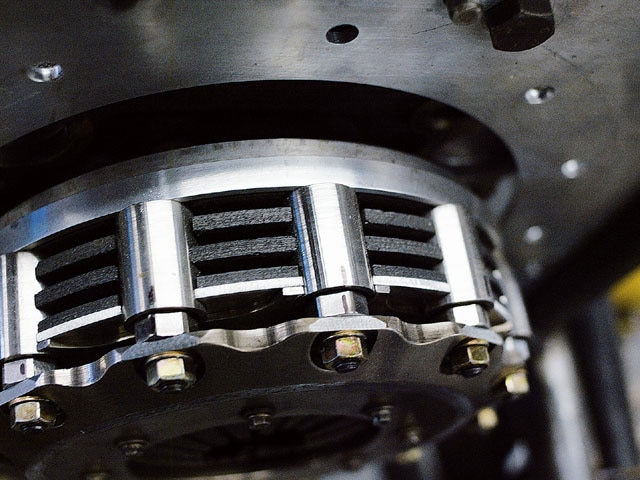 The NORAD Pro FWD Toyota Celica is breaking new ground in many areas of FWD racing technology. Among the innovations Chris Rado, Bob Norwood and the NORAD crew are introducing, the driveline design is most significant. Most DNFs at drag events in the last couple of years have been attributed to driveline failure and occurred in the high-horsepower FWD classes. NORAD team technical director Bob Norwood says the team has found a solution to this problem.

"We decided to start with a clean sheet when it came to the driveline of the new car," Norwood explains. "The current crop of 'transaxle' transmissions isn't really working because the transmission isn't designed for drag racing. Shifting is awkward and slow and the durability is questionable. I decided we'd start with a bulletproof transmission with a proven record in high-power applications and then work back from that starting point."

The DrivelineNorwood's choice, the Lenco five-speed planetary transmission, has a first-class pedigree in drag racing and is renowned for its strength and ease of use. Pro Stock and Pro Mod racers have used this transmission for years, so there's no doubt they can handle the abuse. It can be shifted with levers, electrical solenoids or by pneumatics. Each shift can be adjusted to speed it up or soften the gear change to minimize the shock to the tires. Hundreds of ratios are available and these units are simply bulletproof.

Next, Norwood made the Lenco work in a front-wheel-drive application. The solution was amazingly simple in its design and should prove to be unbreakable in actual racing conditions. First, a 32x16-inch tire was used, with the option of using a 31x14-inch tire at NHRA events. Second, the differential and final drive assembly had to be extremely strong to handle the high-rpm launches the huge front tires would allow. And third, the entire driveline was mounted as low as possible in the chassis to maintain a low center of gravity and minimize weight transfer on the launch.

After much discussion and analysis, Norwood's team decided a Funny car-style rear end was the best way to transfer the drive to the front wheels. Team Engineer Shawn Fischer explains,

"The key factor in our decision was strength. The loads the tire size is capable of generating meant we had to go overboard on the driveline to maintain reliability. We decided to run a Ford 9-inch rear end and utilize a real four-link suspension to give us control over the geometry."

This decision raised other issues, such as how to mount the rear end in the correct position to transfer the drive to the wheels, and how to get the drive from the output of the Lenco to the upside-down-mounted Ford rear end. The answer is, once again, an object lesson in simple, yet creative, engineering from the NORAD technical team.

The trickery starts with the custom billet-aluminum bell housing. Carved from a solid block of 6061 T6 aluminum by master machinist Tommy Todd, the bell housing is designed to be as compact as possible and still house Norwood's unique slipper clutch system. (More on the clutch later.) The one shown here is the prototype and isn't SFI legal, but testing is under way to get the final version certified and completed by the time construction is finished.

Between the bell housing and the Lenco, a billet-aluminum 'spacer-section' also created by Todd allows the rear end to be mounted low enough to maintain the crucial geometry and ride height at optimal levels. He also machined a custom input shaft for the Lenco that's lengthened to allow for the spacer. Bolted onto the rear of the spacer is a standard Lenco CS2 five-speed planetary transmission with the reverser mounted on the rear. The Lenco is lighter than it looks, thanks to magnesium casings and titanium internals.

Transferring the drive to the rear end was the next problem and Norwood's experience with oddball projects in the past paid dividends at this point.

"I've run into the same issues with a few of my Bonneville land-speed record cars and the easiest and strongest way to solve the problem was with a 'V' drive system and a short driveshaft," he says.

Norwood designed the V drive to be as narrow as possible, yet still have enough strength to maintain the team's "bulletproof" requirements. The casing was custom-machined from 6061 aluminum and the four straight-cut gears were machined from heat-treated 8000-series steel. The Lenco feeds the oil into the casing to maintain lubrication. Finally, a custom-built carbon-fiber driveshaft carries the drive from the output of the V drive to the rear-end input flange.

This design will surely raise the bar in FWD transmission technology. It's massively strong, with fast and reliable shifting and unlimited gear-ratio options. Are there any weaknesses?

"I guess the biggest disadvantage of the system is the amount of power the system will absorb," Norwood says. "The Lenco isn't the most efficient transmission in terms of power losses, but we'll have more than enough horsepower to compensate and the durability and idiot-proof shifting makes up for it. I also like that I can tune the shifts to help maintain traction."

But what about the weight of the driveline? The transmission isn't very heavy, but the rear end will be fairly hefty. Norwood believes the weight of the rear end will be an asset rather than a liability, helping to plant the tires and stabilize the launches. The team will still be within 25 pounds of the class weight limit and overall, the advantages far outweigh the disadvantages.

The most important component of the 2004 NORAD Celica's driveline will be the NORAD 'slipper' clutch. "Watching the front-wheel-drive cars at the track is reminiscent of the dragsters of the late '60s," Norwood states. "Most of the teams are relying on wheel spin to launch the cars. The problem is the high-revving, narrow powerband of the four-cylinder cars means you have to spin the tires to stop the car from bogging, or worse, getting into tire shake."

Track conditions change constantly so a car never does exactly the same thing twice. That's why cars are so inconsistent. The only way to control the situation is to slip the clutch in a controlled manner. Norwood is focusing a lot of time on developing a system that will allow the team to control the clutch slip accurately. Other teams are also experimenting with slipper clutch setups, so in the future there'll be much more consistency as they figure it out.

Norwood's clutch system is developed from a Tilton three-plate carbon/carbon race clutch that has seen extensive modification. The biggest change is the addition of adjustable posts in place of the standard cover plate 'fingers'. The adjustable posts are manufactured from titanium to keep the reciprocating weight low; they allow the clutch to be adjusted for wear and to ensure the plates are perfectly in line. A cover on the bell housing can be removed to allow for easy adjustments between rounds. To make the posts work, the original Tilton plates were machined and the fingers were machined off the stock cover.

Lastly, the addition of a fourth aluminum heat sink clutch plate will help to keep the clutch pack from overheating as it slips. A Tilton hydraulic clutch release bearing completes the package.

The control system for the clutch features a pulse width modulation (PWM) valve that's controlled by the Motec ECU. The computer takes into account the engine's rpm as well as the clutch line pressure. A 2000 psi transducer controls the clutch pressure according to a pre-programmed curve, and clutch release can be finely controlled via the ECU.

All of this electronic wizardry boils down to the fact that the clutch release can be accurately controlled according to track conditions, temperature and tire compound.

This system will require a lot of track testing to get an accurate database, but once the information is in the system, the tuning of the clutch on the launch should be fast and reliable and the Celica should be far more predictable from run to run.

"I'm convinced that a controllable clutch is the way forward for the FWD cars," Norwood explains. "My system is just one way to do it and I'm sure the other guys will have some kind of slipper clutch in 2004. Only time will tell if we're going at this from the right direction."

The final aspects of the driveline that we'll examine are the 9-inch center section, the CV, hubs, spindle and brake assemblies. Check out page 126 for the next installment.