Home  |  How To  |  Project Car  |  Bigger Wheels,Tires And Brakes - Project Supra Part 5
Subscribe to the Free 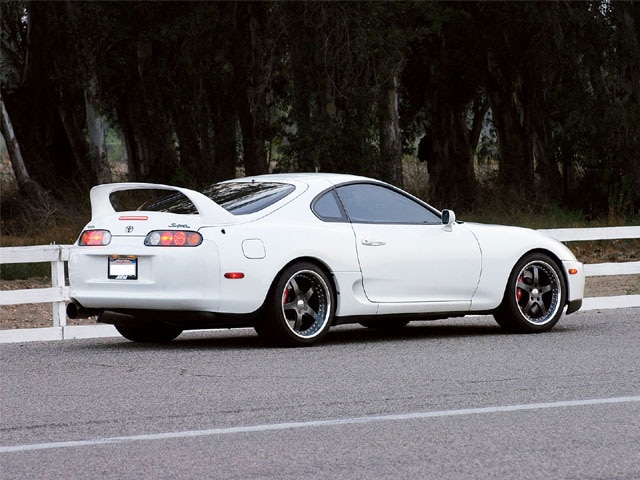 The twin-turbocharged Supra came with exceptionally large brakes, measuring 12.7-in and 12.8-in for the front and rear, respectively. Front and rear rotors are sandwiched by twin-pot calipers with aluminum pistons (one steel and one aluminum piston on the fronts), giving the already fast, wide-tired, stock road rocket no problems when coming to a mind-numbing halt. But we don't care, it's all coming off for even bigger and better components.

Assuming we're not just going for the "show car bling" when deciding on what wheels, tires and brakes to use, it's important to decide on brake size first. First, figure out your budget and then what you intend to use the car for (i.e., street, show, track, etc.) If your budget is under $400, a good set of pads, stainless-steel lines and high-temp brake fluid will make your car plenty track-worthy. If you plan to hit the track hard and your budget is bigger ([cough] much bigger,) then you can quit messing around and do what we did; acknowledge the fact that this powerful, yet humongous, piece of metal will be going really fast and have to stop repeatedly without brake fade. Enter Brembo North America.

In choosing the right brake size we sort of had the "bigger is better" clich in mind. Brembo's Gran Turismo brake system for the Supra features 14.0-in (355mm) vented, two-piece rotors up front and 13.6-in vented, two-piece rotors out back. They come in either slotted or cross-drilled patterns. Although I've track-tested Brembo's cross-drilled set repeatedly with a high-powered BMW M3 Turbo, I felt the heavier-and soon to be much more powerful-Supra would put a little more stress on the cross-drilled rotors. We went with slotted.

The four-pot calipers with sequentially sized pistons come in your choice of silver, black or red. Although considerably larger than stock, each front caliper weighed in at 9.5-lb, a savings of more than 7-lb. per corner. The much larger-than-stock rear calipers added no weight, tipping the scales at 6.5-lb. Brembo supplies the needed adapter bracket for each corner, each of which weighs an extra 1-lb.

Where we thought some weight would be added was in the rotors. Still, the larger and thicker Brembo front and rear rotors weigh exactly the same as the used-up stock units they replace.

The brake kit fit the Supra without much fuss. The stock dust shields either have to come off or be trimmed to allow room for the slightly thicker rotors. After that, everything bolts into place-no need to grind anything.

Once the brakes are on you're going to have deal with wheel clearance issues. Although our stock wheels had to go, Brembo offers a smaller, 13.1-in four-piston brake kit that fits inside the 17-in stock wheels. Given a proper brake caliper diagram, a custom wheel manufacturer can build custom wheels to fit over big brake kits. This is where iForged Performance Alloys fit into the project.

iForged modular wheels go through a high pressure and temperature forging process, which changes the non-directional grain structure of cast aluminum to the high integrity, multi-directional grain structure of forgings. The aluminum remains solid throughout the process as the forging dies come together and change the shape of the round bar to the cylindrical shape of the wheel. This forging "preform" is then placed in a spin forging machine to forge the rim section.

With this particular Brembo kit, an 18-in wheel is the smallest we could go. But before we gave iForged the okay to start the manufacturing process we had to decide on what tire widths we would use. After researching available tire sizes for both street and track use, we chose 18x9.5 for the front and 18x11 for the rear. The fronts will comfortably accommodate anything from a 245mm to a 265mm wide tire. The 11-inch rears can be easily wrapped with widths ranging from 275mm to 305mm.

To clear the front and rear calipers, iForged built the wheels with custom offsets, +45mm in the front and +48mm in the rear. With such large offsets you may want to convert to longer wheel studs, which we may do in the near future. We can still get seven full turns per lug nut. If a sanctioned race event requires the studs clear each nut all the way through then we'll need to convert to longer studs for sure. But for now we'll use the stock wheel studs.

The wheels arrived a few weeks after we placed our order. As beautiful as they are, we knew that there would be some gain in unsprung weight due to the size difference over stock. One of the disadvantages of running a multi-piece wheel is that it's usually heavier than a one-piece. However, along with a more aggressive look comes a much smaller price tag when you ding a wheel at the track or on a pothole, which in this case would cost a modest $200. Much cheaper than replacing an entire,$1,000 wheel!

The respective weights are 24-lb for the front and 25-lb for the rears. Although not the lightest, we aren't too concerned-the trade off from the small amount of added weight versus the gobs of extra grip in every direction will be worth it. In fact, at the time of this writing the Supra has already been re-dynoed since the last intake manifold install. Thankfully, not one horsepower was lost through the wheels as a result of the heavier running gear.

The tire of choice was once again the Bridgestone Potenza S-03. The fronts are outfitted with 255/35-18s and the rears with 285/30-18s, the widest tire offered in the S-03 line-up. Bridgestone was chosen for its exceptional grip in dry weather, something we Southern Californians see year-round. Its cornering, acceleration and braking grip outshines the majority of the competition, and the S-03 proved itself worthy last time we hit the road course.

Although getting wheels installed is a brainless act, things still can go wrong. I stripped one stud completely. Worst of all, it was on the corner that would be getting the most abuse on the road course, the front-left. Thankfully after a quick trip to Under Pressure Fabrication and Distribution, the Supra had all five studs holding the wheel on for better piece of mind.

The new wheel and tire combo, coupled with the increased braking power, is nothing short of awesome. The new brakes are so powerful that using stock tire sizes would only have the car frequenting the ABS department at fifty-percent pedal effort. With the increased tire sizes in both the front and rear, braking performance has increased dramatically. We should have some numbers soon.

Along with cornering performance, an increase in acceleration grip is another benefit with these tires. However, going wider up front has caused a new problem we must tackle. The extra grip from the wider tires causes the car to lean instead of slide, bringing the edge of the tire in contact with the outer edge of the wheelwell under hard cornering. Even with the Supra's adjustable coil-over system set to full stiff (more on that next time) the car rubs under hard cornering. We need to dial in some negative front camber-something this Supra needs anyways. We'll also try to remedy the problem with a set of stiffer anti-roll bars.

In the next couple of installments we'll talk about a new suspension system, test an intercooler kit, and re-dyno the stock twins with more ignition timing and boost. We'll hopefully have another track day under our belt with this setup and R-compound tires as well. After that we will really start diving into the engine for some serious, Suprasonic power. Stay tuned.

Author's note: Special thanks to Doug of Big O Tires in San Bernardino for having these tires mounted and balanced on such short notice.