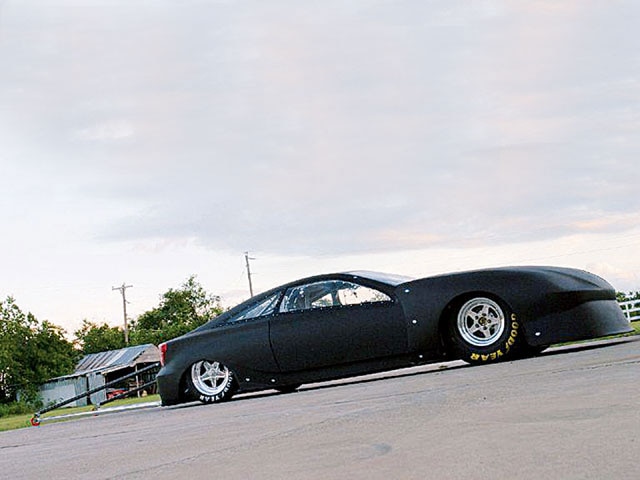 I'm always excited when a project gets close to completion. The car starts to take shape and you get a real sense of satisfaction. The real payoff is when you get the first successful test session under your belt. This doesn't mean the job is finished, not by a long shot. It normally means you've acquired some hard data and are in a position to make educated decisions about what needs changing to get the car as close to its potential as possible. At this point the real hard work starts.

Dialing in a new car is never easy. How many racers do you know who've had a car running for months without getting a decent pass out of the thing? It's got all the right parts and pieces but it just won't perform the way it should.

Many racers try to go too fast, too soon. It's easy to get caught up in the trap of doing the setup and tuning at the track on race day. That's not the time to do it! Invariably you'll end up trying to dial-in the car during qualifying, resulting in a pitiful position on the ladder and a car that's still a mile away from being race-ready.

The car will be back on the trailer after the first round of competition and the entire team will be bummed out after making fools of themselves.

A perfect example of how it should be done was executed by Stephan Papadakis at Bandimere Speedway in Denver at the NHRA nationals. Being a smart racer and knowing that setup would be crucial at the high-altitude Colorado track, Steph dragged his team to Denver a couple of days early and spent time testing to find the right tune-up. His AEM-sponsored Pro RWD Civic was nearly unbeatable and ran flawlessly as it carried Steph to the winners' circle.

Of course, I understand that testing can be expensive but is it cheaper to transport the entire team hundreds of miles to be eliminated early in the day? I think not! Be smart and take a page out of Steph's book. Set your car up before you sign up for the races and save a lot of time, money and frustration.

With the NORAD Celica project coming to an end, we're planning to test as much as needed to get the car performing the way it should to be able to compete with the factory-sponsored teams of Nelson Hoyos and Lisa Kubo. The bar has been raised in Pro FWD by these teams. It's never easy to take on the big guys, but we are looking forward to the challenge.

An important part of our effort will be the initial testing of the NORAD Celica. Initially, the car will be tested at a local eighth-mile track near our shop in Texas. It's local and it's cheap (not a bad combination.)

We'll focus on getting a basic tune-up in the Motec and on the initial launch of the car. With a car as radically different as this one, we have no old data to rely on and need to concentrate on gathering information, analyzing it and making the required changes. The object of these early tests will be to dial in the slipper clutch and get the car launching as hard as possible without spinning the tires. We will also be setting up the four-link suspension and concentrating on getting the car as close as we can to our 660-foot goals.

Once the car is performing in the eighth-mile, we'll move to a quarter-mile facility and concentrate on the high-speed performance and handling. This part of the process should be a lot less intensive than the initial tests. If we have the car set up to launch correctly we will be able to dial in the gearing, engine tune-up and aerodynamics for the quarter-mile pretty quickly.

Hopefully the end result will be a car that will just need fine-tuning when we make our competition debut. I'm not saying that it will be perfect and I would be as dumb as a rock if I didn't expect some problems, but we can minimize the hassle by having a structured test program.

Another benefit of all this testing is that Chris will have a chance to get comfortable in the new car. Every car is different and by the time we get to our first race we will have many runs on the car and it should feel like home-sweet-home to Rado.

I'm excited to be so close to hitting the track with Project NORAD. It's been a long and sometimes frustrating process, but with the help of the talented group of individuals in my shop it should all be worthwhile in the end.

We'll see you at the races some time soon. For now, it's testing, testing and more testing...