Why CVT transmissions have no place on performance cars...yet

Back in October, Nissan's Executive Vice President Andy Palmer publicly stated that the Toybaru rear-drive coupe that's taken the enthusiast market by storm is "designed for a 50-year-old. It's for a midlife crisis." Strong words, and presumably ones that were about to be backed up by the announcement of an affordable rear-wheel-drive fun machine of their own.

Sure enough, a few weeks later at the Tokyo Motor Show, Nissan unveiled two IDx concept cars, one being especially enticing to the go-fast crowd with its race car-like livery and Nismo tuning touches. The Internet was abuzz with chatter about how the IDx harkens back to the Datsun 510, a design choice I found kinda cool given the 510's history, but also a touch ironic because of Mr. Palmer's talk of midlife crisis cars (aren't retro-styled cars designed to tickle the nostalgia bone of middle-aged buyers?). Personally, I think an ultra-modern S16 (250SX?) would have been a better strategy for attacking the Toybaru—but what do I know?

Retro styling aside, the idea of a compact, affordable, rear-wheel-drive platform from Nissan with a turbocharged 4-cylinder engine is definitely worth getting excited about. But beneath the buzz lurked an ugly, fun-sucking line on both concept cars' spec sheets that simply stated: CVT transmission.

No manual gearbox option? Not even on the Nismo concept? Is this some kind of sick, cruel joke? Has any enthusiast driver in the history of enthusiastic driving ever had anything positive to say about the way a CVT delivers power to the drive wheels? The answer is an emphatic "No." Not ever. Why is that? Well, let's start at the beginning.

CVT, which stands for continuously variable transmission, is actually a pretty clever concept with many different designs emerging over the years, the most popular being the variable diameter pulley-based units like Nissan's XTronic and Subaru's Lineartronic. These metal-belted, pulley-based CVTs are generally considered the most reliable designs on the market, thanks to the simplicity of the pulley system as well as the quiet operation and durability of the multi-layer high-tensile metal belt that links the pulleys.

As a tech nerd, I can appreciate what's going on here, since from a fuel-efficiency standpoint, CVTs do make a pretty compelling case for themselves. Infinitely variable gear ratios between the minimum and maximum available (in the case of Nissan XTronics, the low to high gear ratio spread tends to go from about 2.3 on the low end to about 0.4 on the high end) do mean you can keep engine speed at that magical lean-burn rpm for a much wider range of vehicle speeds. The relatively wide spread of gear ratios possible also results in a high final drive reduction ratio, meaning acceleration should improve, too.

And from a go-fast perspective, you'd also think a CVT's ability to hold engine speed at the rpm where peak power is produced would make it superior to a manual or traditional automatic transmission, but in practice that simply isn't the case yet. Part of the reason for this has to do with the speed at which a CVT can change gear ratios. I've street-driven and track-tested a number of CVT-equipped vehicles—including the Nissan Juke Nismo and the new Subaru Forester XT—both of which have impressive turbocharged engines, but in both cases when you stomp on the gas coming out of a corner, there's a noticeable delay as the gear ratios change and then that odd sensation of the engine holding peak horsepower rpm. Worst still is the laziness with which these gearboxes tend to "downshift," seemingly doing everything in their power to prevent you from finding that peak power rpm when you need it most. 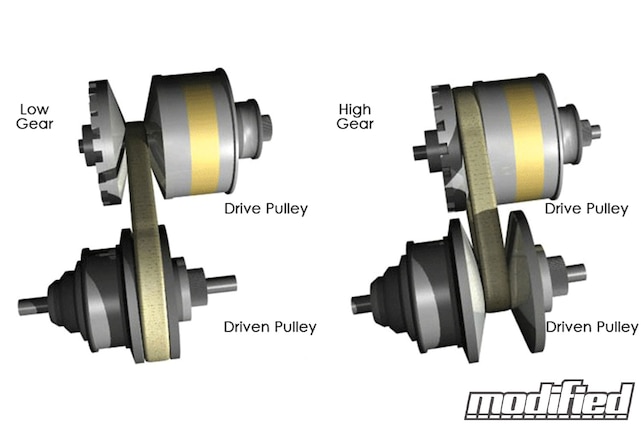 Photo 3/4   |
Nissan’s XTronic CVT transmission is an impressive piece of technology, using a drive pulley and a driven pulley with variable diameters that are linked by a metal belt such that gear ratios can be varied infinitely across a wide range.

I'm not sure if the delayed reactions of the CVTs I've tested are the result of how quickly the gear ratio can physically change, or if they have more to do with the "shift" logic being used by the computer that controls it. In either case (or maybe it's a combination of the two, or some other variables I haven't even considered), Nissan has actually made considerable effort to improve the responsiveness of its CVTs, especially on sportier models like the Juke Nismo, even going so far as to simulate the feel of a traditional downshift when you stomp on the gas pedal.

On the street, CVTs really are quite effective, if a bit off-putting because of the apparent disconnect between engine rpm and vehicle speed, but out on the racetrack, and especially once the gearbox and its fluid get a bit too hot, no matter how relentlessly you request a more aggressive gear ratio, it ain't gonna happen based on my experience. Presumably, this is a self-preservation tactic linked to transmission temperature or engine torque and the sheer load being placed on the pushbelt, although it's probably also linked to engine temperature and many other data points being crunched by the onboard computers.

All I know is, out on the racetrack, CVTs are an exercise in frustration, not efficient power delivery. In fact, the more laps I turned in the Juke Nismo and Forester XT, the more unwilling their transmissions where to deliver the correct gear ratio for anything approaching peak horsepower rpm, let alone at the moment I was asking for it (you know, when you transition back to wide-open throttle coming out of a corner, for example). The inability of these CVTs to handle track duty became even more apparent when they began limiting rpm to a lower and lower level down the main straight. Again, I'm assuming this was a sort of "limp mode" designed to save the gearbox from death due to overheating or too high a workload being asked of the belt and pulleys. Whatever the case may be, the end result was a car parked in the paddock instead of being enjoyed on the racetrack with all the manual gearboxed machines. 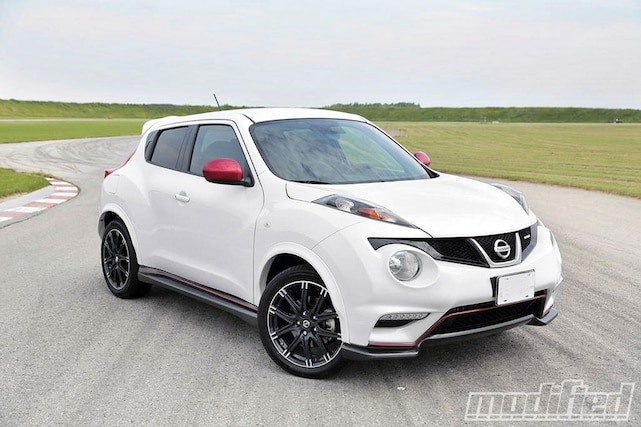 Photo 4/4   |
Track testing the Nissan Juke Nismo proved that CVT technology isn’t ready for racing quite yet. After just a lap or two, the gearbox would overheat and severely limit rpm, all the while offering “shift” logic that can only be described as infuriating.
View Photo Gallery (4) Photos

The good news is CVT technology is improving by the day, and there's reason to believe if companies like Nissan and Subaru continue to refine them, the day may come when they do actually outperform a manual gearbox around a racetrack, let alone a dual-clutch automatic. But we're not there yet, which is why I find it so puzzling to see the IDx Nismo listed with a CVT. Let us hope Nissan gives us real enthusiasts a transmission option we can get excited about before putting their midlife crisis antidote into production, preferably one with a third pedal designed for real driver involvement and the occasional clutch kick.

(Mr. Pratte has yet to drive the new '15 WRX, which has an optional CVT automatic and is actually a quick-shifting box but far from perfect. It shows that there's potential in the CVT, though. -Ed.)

Send your letters to PlanetDave@me.com