The must-have upgrade for your Scion FR-S/Subaru BRZ 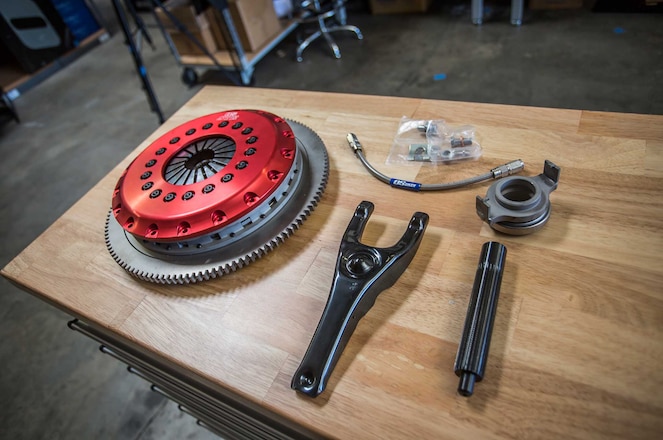 Whether your Scion FR-S is stock or heavily modified, the unavoidable truth is your throw-out bearing is bound to fail. If you saw the SPEC Clutch install on my Hot Lava Scion FR-S, my factory throw-out bearing was disintegrated at 80k miles. But we've heard reports of clutches getting bad as early as 40k miles. OS Giken did a lot of research in Japan and since they are mainly a clutch company, they'd developed their clutch upgrade first. Later on down the line, some of their customers were complaining about failure of the stock clutch fork. The engineers at OS Giken examined the fork to see how strong it really was and as it turned out, the durability of the stock forks on the popular FR-S/Subaru BRZ were far below the standard you'd find on many other OEM forks. The material around the forks is extremely thin and prone to bending which eventually causes the throw-out bearing to fail. In true OS Giken fashion, the engineers improved it by developing a reinforced clutch fork.

You'll notice right away just by holding both forks that the OS Giken unit is thicker and feels heavy duty. Since the fork is bigger, they had to design a special sleeve and throwout bearing. The new OS Giken sleeve assembly is simply placed into the fork and won't be held by the flimsy factory clips. The OS Giken sleeve itself is reusable, but when you need to rebuild the clutch, all you have to do is replace the throwout bearing. Another failure point that OS Giken found was the clutch line's tendency to stretch. Instead of having their customers replace problem after problem, OS Giken includes a steel braided clutch line along with their fork upgrade kit. Sean from OS Giken also mentioned that the fork kit is unfortunately not compatible with the stock clutch. 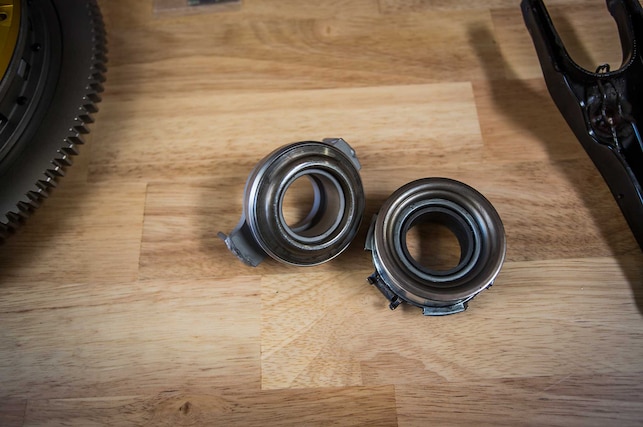 I headed to Evasive Motorsports in Santa Fe Springs, Calif., to get my personal Scion FR-S fitted with the OS Giken Fork Upgrade kit as well as the twin disc STR Series clutch. When you open up the clutch you'll see the components are made of billet steel but have a little bit of discoloration from being chemically heat treated. The 360-degree billet housing has c-channel shape used for rigidity purposes. Let's say you do a hard launch - the housing prevents the flywheel from flexing. It was the same exact procedure performed for my last clutch change, but this time we used OS Giken's metal clutch alignment tool (sold separately). You want to make sure that the discs are properly aligned on multi-plated clutches to avoid any warping. The fork kit and the sleeve assembly bolts right on to the transmission, and be sure to lube the shaft before installing.. OS Giken's STR product lineup is designed to handle up to 500 lb.-ft. of torque and serves as a less aggressive twin plate. The clutch modulation is very user friendly and even if you have a heavy foot, you can still get used to it rather quickly as the pedal feel is very close to factory. In my previous setup, the friction point was unpredictable because of the fork and throwout bearing. With this set up, however, it provided much more consistent modulation. When you press the clutch you'll hear a bell ringing sound, but don't be alarmed, OS Giken tells us that it's normal and the sound you're hearing is actually the free-floating pressure plate.

The OS Giken STR clutch and the Upgraded Fork Kit together will run you about $2,100 MSRP. That might sound like a lot, but it will save you a headache later on down the road when your factory fork clutch bends or your throwout bearing fails. You want this part. In fact, you need it.