Get Out Of The Dog House With A Dog Box Transmission 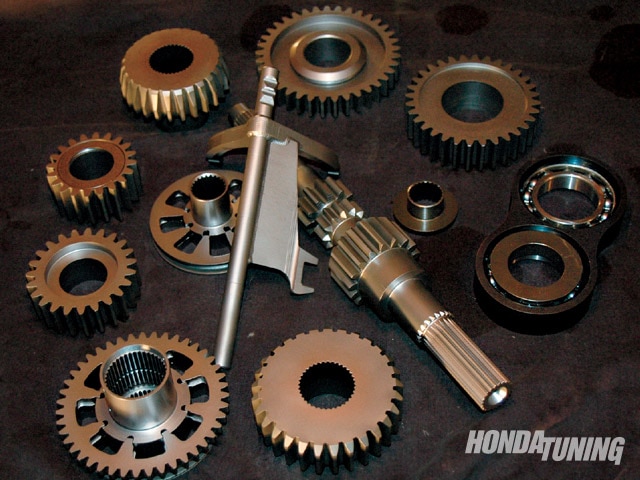 Dog Box Transmission
People love to go fast. It's in the human DNA somewhere right around the "go fast" gene. Some enjoy the occasional stop light grand prix in an attempt to see who can reach 50 MPH first. Others take speed to a completely different level. These are the guys striving to put down times faster than Michael Phelps on steroids. Super fast cars do more than register high trap speeds; they destroy various components of a car, especially the transmission. Even Honda's unprecedented reputation of strength and reliability cannot escape the consequences of cars with insane amounts of horsepower.

Honda, with its forward thinking, has presented enthusiasts with a number of incredible motors. The not so recent K motor has allowed Hondas to further lower their elapsed times, but not without indirectly destroying a few transmissions along the way. Any naturally aspirated Honda producing at least 300 WHP will typically start breaking transmission pieces. In naturally aspirated cars, second gear tends to be sacrificial lamb due to high revs placing a lot of stress on the transmission. For turbo powered Hondas, breakage begins around 500 WHP. With boost, second and fourth gear often give-out under excessive boost loads.

Transmission synchros are also a weak link for both NA and boosted cars. Some racers shift so fast that the stock K transmission doesn't have enough time to properly engage the next gear, causing severe and irreversible damage. These extreme shifts grind the steel synchros against the steel engagement teeth on the gear. Steel grinding on steel can be catastrophic, often ending the life of a transmission. Too much stress can even cause the aluminum transmission casing to explode, sending many racers home packing. Grinding gears is kind of like going into an Irish pub and telling the owner he should call it a United Kingdom pub: something is bound to break. For extreme shifting duties, an alternative transmission may be needed. This is where the Dog Box comes in.

Stock K transmissions have lots of gear teeth that are angled for smother shifting. They also have tons of tiny parts, all of which are used to uphold Honda's legacy of durability and strength. Dog Box transmissions have fewer teeth, but they are larger and much straighter. They use far fewer parts than OEM transmissions while still retaining reliability. These gears are made to handle fast shifts in high horse powered vehicles. To some extent, the straight-teeth design creates a unique, almost whining sound inside the car. Not all Dog Box transmissions sound the same, but for the majority, the gears produce a sound similar to the noise a stock reverse gear makes when in use. Less parts and dog teeth make this upgrade a highly effective item for any serious racer.

Although these transmissions can be driven on the street, they're intended for racing. In order to shift, the user must unload a little torque to ensure the dog teeth are not lined up. This can be done by tapping the clutch or letting off the gas similar to shifting a stock transmission. The majority of racers with bigger budgets utilize a strain gauge to unload power. A strain gauge sends a signal to the ECU to stop the ignition which in turn unloads power long enough for a super quick shift. Though these tranny's are strong, that doesn't mean they can't be improperly used. That's why caution is strongly urged in using this transmission for daily driving. Grocery duties are better left to a backup beater.

Most racers with cars producing over 300 WHP opt for a Dog Box after they get tired of replacing their stock transmission. Repeatedly replacing transmissions and the parts involved is time consuming and costly. A few blown transmissions resulting in "Did Not Finish" scores and several thousand dollars in repair costs can entice even the most thrifty competitor.

Since the introduction of the K series seven years ago, numerous products have been developed to support the power plant. However, Dog Box transmissions have not seen their full potential mainly because there isn't a high demand for them. Expensive to design and build, R&D is costly, yet necessary to insure a quality product is produced. With such a small market, the cost must be spread over fewer customers further driving up the price. Despite the initial purchase price, Dog Box transmissions can actually save users thousands of dollars in the long run by reducing the need to constantly replace the stock unit and its parts.

A few companies have stepped into the Dog Box arena including: Go Power Motorsports, Magnus Motorsports, and Pfitzner Performance Gearbox. These companies mainly offer four-gear Dog Box transmissions with the option to include five and six gears. These specialized transmissions range from $4,700 up to $6,500. Adding fifth and sixth gears will increase the price. They utilize many custom made parts as well as a few stock components. Each product is slightly different and must be analyzed carefully before purchasing to ensure maximum benefits. Customers can simply order the correct transmission and have it shipped to them and proceed with installation. Some companies offer installation at their shop as well.

Go Power Motorsports out of Oak Hills, Calif., happens to offer both options. Jeff Giovino along with other performance enthusiasts founded the company in early 2007. They wanted to bring quality products to the performance market. Though they'll never claim to know it all, with over 20 combined years of experience under their belt, they've kept afloat relying on hands on experience, and customer feedback to support their business philosophy. Giovino worked as a technical supervisor at Nitrous Oxide Systems and the National Hot Rod Association. He then served as the Research and Development director at Skunk2 Racing. He's led teams to championships in numerous race venues including NHRA, NHRA Sport Compact, and the Pacific Street Car Association. Over the years he met fellow race enthusiasts Nalani Whatley and Javier Loarca of Hondata. Together they decided it was time to create a Dog Box for the K series transmission. Giovino used Nalani's naturally aspirated CRX and Loarca's turbo driven vehicle as test mules. Nalani, acting as the catalyst, put up half the money for Go Power Motorsport's first Dog Box transmission. Ultimately, Giovino's first Dog Box needed some tweaks and revisions, four to be exact.

The research and development process lasted 17 months. They all knew that they wanted a high quality offering, but as with any new product, the first version had flaws. Giovino hit a snag when he realized the cuff had fitting issues within the K transmission casing.

More test runs ensued and eventually Giovino found the perfect design. The most significant change came by changing the original position of the cuff to a more sturdy and sensible location. All of Giovino's Dog Box transmissions are made out of 4340 alloy steel for its strength and cost effectiveness. He also offers the addition of WPC treatment to reduce friction and increase longevity. WPC treatment started in the 24 hour Le Mans race and is a must for any worthwhile Dog Box. The process treats the internals of a transmission by reducing friction and improving durability rather than acting simply as a coating that could potentially wear off with use. The treatment is also permanent. The final version should be good for 60-70 passes.

In the end, serious racers or owners of cars with substantial amounts of horsepower should consider a Dog Box transmission kit due to its overall investment value. Having gobs of horsepower won't amount to anything if the power cannot be efficiently and effectively transferred to the pavement.