The Pros And Cons Of Dog Box Transmissions. 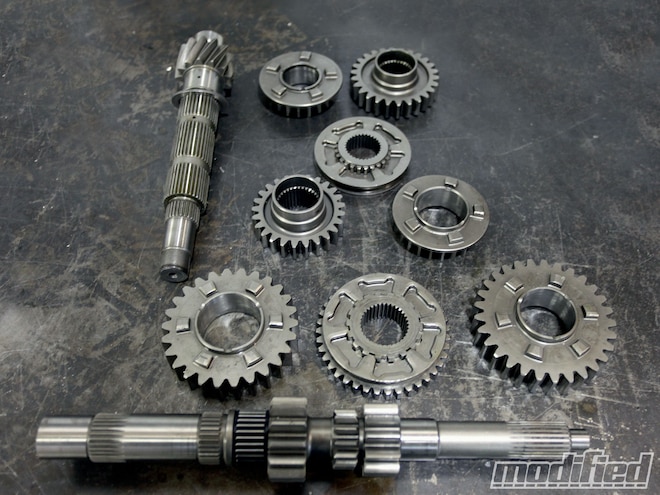 If you've ever heard the racket made by a straight-cut dog box transmission, then you know these things produce a high-pitched scream that sounds like a cross between a frightened cat and an electric guitar gone insane. And yet somehow it's also the coolest noise in the world, simply because of what it represents: hardcore motorsports gearbox goodness. If you don't know what I'm talking about, jump on YouTube and search for a video called "Straight Cut Gears" and listen to the insanely awesome sound of the straight-cut dog engagement gearset in Rolf Van Os' Dutch Supercar Challenge BMW 320 STW. Just keep in mind that this is an extreme example and that modern dog box gear tooth profiles result in much quieter operation - so much so that you could use one on the street without drawing any extra attention.

If you watch enough videos of dog box-equipped touring cars banging through the gears, it becomes clear that straight-cut dog-engagement gearsets allow for quick clutchless shifting, but beyond that it's hard to know what the advantages and disadvantages of this type of transmission might be (other than the wild soundtrack).

To help me better understand the pros and cons of dog boxes, I turned to Marco Passante of Magnus Motorsports, a manufacturer of straight-cut dog-engagement gearsets for Mitsubishi, Mazda and Honda transmissions, including the K20A2 unit in my trusty old EG race car. OK, I'll admit it, part of the reason I wanted to learn more about dog boxes was to determine if my recently supercharged 400+ whp K24 Civic might benefit from a set of dog-engagement straight-cut gears because stock Honda K-series gears and synchros are notoriously fragile. 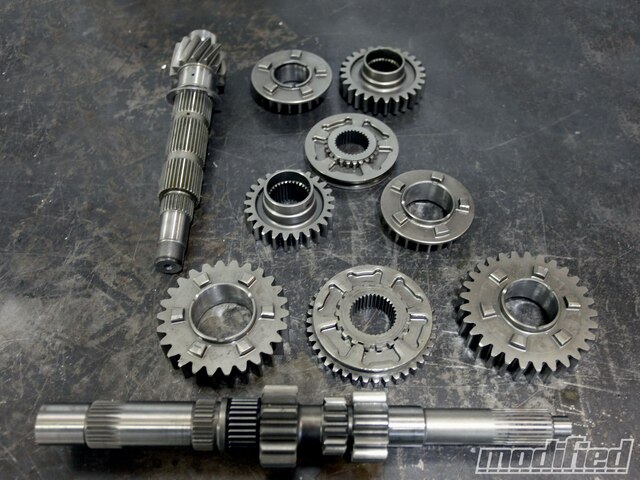 To illustrate the differences between an OEM synchromesh transmission with helical gears and straight-cut dog-engagement gears, Marco laid out a stock Honda B-series gearset alongside a set of his dog box gears and shafts (both input and output). The helical OE gears are cut at an angle and also have some curvature and twist to their profile. In fact, this shape is the segment of a helix, which explains how this gear shape got its name.

As Marco explained, this helical shape allows the gears to mesh more smoothly and silently. With parallel helical gears like those used in an OEM transmission, each pair of teeth first makes contact at a single point at one side of the gear wheel and then a moving curve of contact grows gradually across the tooth face and then recedes until the teeth break contact at a single point on the opposite side. It's this path of contact that fosters smooth meshing of the gears and is key to the quiet operation of helical gearboxes, and thanks to their unique shape, there's generally 1.5 teeth in contact at a given time to better distribute the load.

Photo 4/7   |   Notice how the helical gears mesh together on this OE Honda B-series gearset. Also note the straight-cut reverse gears (second gears from the right).

Further aiding the smooth engagement of the gears in an OE transmission are the synchronizers or "synchros," as they're more commonly known. The synchronizer mechanism consists of a cone clutch and blocking ring. Before the teeth can engage, the cone clutch engages first, which brings the selector and gear to the same speed using friction. The synchronizer's friction surface can be made of an organic friction material, carbon-fiber derivatives or, most commonly, brass featuring friction teeth. The blocking ring prevents gear-to-gear contact prior to the gear and selector being fully synchronized, at which point the ring is relieved and allows the gear selector to fully engage and mesh the gears together.

The downside to helical gears is that their shape creates a lot of thrust load along the axis of the gears or down the shaft they're mounted on. This thrust has to be controlled via thrust bearings and greater sliding friction provided by the transmission fluid or gear oil. The thrust load generated by helical gears also puts a lot of stress on the transmission housing or case, so OE transmission cases must be designed to handle this load. However, when thrust load is increased thanks to that big turbo you just installed, you can max out the holding capacity of the case - not to mention wear out the synchros quite rapidly. That's when it's time to consider upgrading to a set of straight-cut dog-engagement gears like those manufactured by Magnus Motorsports, PPG, Hollinger, KAPS or Quaife.

Unlike a synchromesh gearset, a dog box gearset uses large square-shaped blocks or "dogs" on one side of the dog-engagement rings that serve to lock the ring to the adjacent gear. These dogs are much bigger and stronger than synchronizer teeth, allowing the dog box to handle a higher horsepower engine, and the dogs are also typically spaced such that they'll more easily align with the indentations on the side of the gear or engagement ring they're being locked to. The straight-cut gear teeth provide complete contact along each tooth's mating surface at all times, providing added strength over helical gears, and their straight profile also means that there's no thrust load to stress the transmission case.

Because there's no synchronizers helping to match the speed of the gears and the input/output shafts, a dog box does require a strong and direct shifting action when changing gears and it also requires skillful rev-matching. As Marco from Magnus said while showing me some destroyed dogbox gears, "In the hands of a savage, these gears can be destroyed pretty quickly despite the fact that the dogs are much stronger than synchros and the high-grade material we use for our gears is hardened and very strong. If you shift fast and with conviction you'll have no problem finding the next gear. But if you shift like a sissy, the dogs will not fully engage and they will start to chatter against each other. This is the only time you will start to see excessive wear. Basically, premature wear is caused by misuse, either from granny shifting or from trying to force the gears in after missing a shift. It's also important to keep in mind that although you can shift without using the clutch, there must be a momentary release of power to shift [because the dogs are back-cut so they'll stay engaged once you take your hand off the shifter] so you can either tap the clutch or lift off the gas a bit when shifting. When done right, you can't beat the speed and solid engagement you get with a dog box."

As for that special high-pitched whine, that's caused by the straight-cut design of the gear teeth. In fact, the teeth for the reverse gear in standard transmissions are straight-cut, so that's why you hear that high-pitched whine when reversing in a manual transmission vehicle. As cool as this soundtrack may be, the real reason to upgrade to straight-cut dog-engagement gears is for greater strength and durability in high-horsepower vehicles where the OEM transmission has been overwhelmed by torque and thrust load and has become a source of repeated parts failure. In fact, if driven correctly, a dog box will not only improve reliability thanks to its superior strength, but the dog-engagement system makes for quicker and more solid feeling shifting action. Just look at the way Van Os bangs through the gears in his Dutch Supercar BMW and tell me you don't want to do the same!