How a Volk Racing TE37 Is Made - Break It Down

You’ve always wanted a set—and we’ve had our share of owning many sets over the years—but do you really know what makes Volk Racing’s TE37 wheel so special? Didn’t think so.

Volk’s TE37 dates back to 1996, when Japanese wheel manufacturer RAYS first released its one-piece forged aluminum wheel to consumers. Once considered a luxury reserved for the likes of formula cars that you can’t afford, RAYS helped introduce forged wheel technology to people like us with its Volk Racing line. And since 1996, the TE37 has been manufactured solely in Japan. In fact, Rays’ entire operation is based out of Japan, where all of the company’s design, manufacturing and marketing efforts are conducted, which ensures the sort of quality RAYS expects, and that JDM fan boys can continue to sleep soundly at night.

What Makes the TE37 So Good

Lightweight wheels are nothing unusual. If that’s all you care about, you’ve got plenty to chose from. The TE37 adds two other important elements, though: strength and rigidity. Together, those characteristics are what make a wheel like this so distinctive. In terms of racing, it’s a matchup that’s essential: the more rigid the wheel, the better torque can be transmitted to the tires and, ultimately, to the road. And, well, strong wheels, they don’t break.

Photo 3/10   |   RAYS Engineering’s current versions of the TE37 are the TE37RT and TE37SL. They’re even better than the original formula!

TE37s are also made entirely of aluminum, unlike other aluminum wheels that can contain as much as 20-percent other nonsense. As it turns out, this isn’t just any aluminum, though. RAYS commissioned its own A6061-T6 blend that specifically complements its forging process and results in the specific elasticity, stress strain, tensile strength and fatigue strength the brains behind its engineering department were looking for. When compared to other aluminum wheels, the TE37 exhibits nearly 20-percent higher tensile strength and elastic characteristics that resist permanent deformation. All of that means that its pure-aluminum construction doesn’t just result in a lightweight wheel, which, by the way, is pretty important. According to RAYS, eliminating 1kg (2.2lbs) of unsprung weight, like that from your car’s wheels, can be as effective as shedding 15kg (33lbs) of overall vehicle weight. As it turns out, pure aluminum also allows for increased rigidity as well as better thermal conductivity, remaining up to three times cooler than steel, resulting in better brake cooling and better overall performance.

Before anything can be developed, RAYS makes use of complicated FEA (Finite Element Analysis) software to determine whether or not a particular design doesn’t just look good but is structurally sound. On the road, a wheel’s outer rim undergoes significant amounts of stress during cornering while the inner portion is critical to the wheel’s ability to maintain appropriate tire grip. FEA allows engineers to simulate stressful situations and determine where potential weak points may occur before manufacturing a single rim.

Proper analysis is all well and good, but if the manufacturer lacks the technology to do anything with it, then it doesn’t do anybody much good. Fortunately, RAYS doesn’t. Forging, one of the oldest known manufacturing methods, is the process of shaping metal through compression, and is precisely how the life of a TE37 begins. Here, billet aluminum is subjected to high temperatures and pressures that help form a dense, compressed structure, which results in significantly more strength when compared to raw aluminum. It’s how any decent racing wheel is made, mind you. The results are stronger than cast or machined counterparts. For example, Japanese samurai swords and Space Shuttle parts are typically forged from aluminum. Ice cream scoopers and yard tools are often cast.

Like lumber, metal has its own grain, also known as its fiber flow. The finer the grain, the higher quality the material is. And the better that grain follows the shape of its part, the stronger the part will be. For example, when machine forging, the metal’s grain is preset, typically traversing side to side, resulting in a wheel in which its grain may flow any number of directions once cut. Mold-form forging shapes the wheel through compression using a series of dies so that its grain flows according to the shape of the wheel’s rim and spokes, allowing it to remain continuous, resulting in an impressive strength-to-weight ratio. In other words, RAYS is able to take a hunk of aluminum and shape it into what roughly looks like a TE37 without any cutting. They place a significant emphasis on the metal’s grain and claims for it being the most critical element of a properly forged wheel.

RAYS developed its own machinery to accomplish all of this as well as to yield the highest forging ratio possible (read: strong). Its RM8000 spin-open die forging machine—the most powerful in Japan and largest in the world—applies up to 10,000 tons of force to both sides of the material, while spinning, to help achieve the appropriate shape, density, and grain flow. Compared to other forging processes, this allows for the appropriate grain to be retained as well as for reduced manufacturing time.

The wheel-making process starts with a raw aluminum disc that’s heated to 470 degrees Celcius. Next, the actual forging begins, where the aluminum is compressed, distributing its mass appropriately, resulting in a rough version of the finished product. The following step, which RAYS calls “detailed design forming,” further forges the wheel, now revealing its specific design characteristics. The RM8000 forms and stretches the inner and outer rim at loads up to 10,000 tons. Next, the area between each spoke is punched out followed by a cold-spinning process that forms the inner rim. A specialized heat-treating process finalizes the forging procedure before the wheel is tested for proper hardness. From there, each wheel is machined, revealing their details as well as creating the appropriate lug pattern and valve stem locations. Finally, a shot-peening process is applied that further increases each wheel’s strength before cleaning and powder-coating take place.

Photo 9/10   |   This is where each wheel is machined to help bring out the fine details, such as lettering, designated lug pattern and valve stem locations.

Once manufactured, a number of tests are performed to ensure that when your 240SX ends up on the side of the road, it doesn’t have anything to do with your wheels. First, one million radial load fatigue testing rotations ensure wheel strength and endurance. Here, the wheel is fixed to a hub and spun with bending stresses applied to discover potential cracking or deformation. Next, a 13-degree impact test determines proper air retention and confirms overall wheel strength. Engineers drop the wheel and tire assembly from a fixed height and specified angle to simulate curb contact. A similar 90-degree impact test is then conducted, which determines whether or not damage may occur due to potholes or other types of road impact, and gives engineers another chance to chuck wheels into the air. Finally, a drum endurance test ensures durability of the rim itself. Again, the assembly is mounted to a jig where a minimum of 500,000 rotations are applied. RAYS even tests its wheel coatings, exposing them to ultraviolet radiation as well as a series of procedures to ensure against peeling, chipping or scratching. Although JWL (Japan Light Alloy Wheel Standards) calls for minimum standards by which all of these tests must be conducted, RAYS has developed its own criteria (JWL+ R), that are more strict for the high-performance use most of its wheels are subjected to.

Photo 10/10   |   Wheels that are ready for final inspection…and hopefully on their way to your car!
View Photo Gallery (10) Photos

*(Editor’s note: please visit our YouTube channel beginning April 1 for the video companion, where you can actually see and hear the wheel forging process!)

How a Volk Racing TE37 Is Made - Break It Down
Photo / 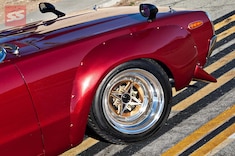 Now just because a wheel is old-school and rare, doesn't mean it's sought after by enthusiast. Ugly, striking, unusual, atypical, over-priced, whatever you want to call it, here are 20 of the coolest old-school wheels ever released. 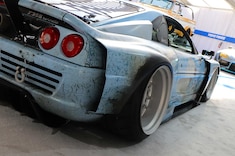 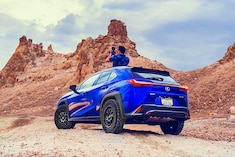 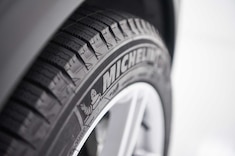