Toyota Supra How To News

A90 Toyota Supra Traction Control Issue Resolved
If you're considering pushing your modified A90 Supra to its limit on the track then RSR's EDC cancellers are a must have mod.
Sam Du – Aug 24, 2020
SuperStreetOnline
SuperStreetOnline Magazine
how to

Eventuri Is The Rolls-Royce Of Performance Intakes, But Do You Need One?
Eventuri has been a favorite among the most elite and highest-performing European sports cars out there. We see if the hype behind them is real using Sam's Supra.
Sam Du – Jul 23, 2020
SuperStreetOnline
SuperStreetOnline Magazine
how to

2020 Toyota Supra Tests Yokohama ADVAN Apex V601
Tires are the most important investment you can make when it comes to your safety and car's performance. There's a lot of factors that go into choosing the right tire, some of which may matter to you more than others
Sam Du – Jul 13, 2020
SuperStreetOnline how to
2020 Toyota Supra: To Go Custom 20-Inch BBS Or Not, That Is The Question...
Sam has been itching to change things up on his Supra for awhile. Lucky for him, he got the chance when AR Motorwerkz called asking if he could help test fit a custom set of 20-inch BBS LM wheels.
Sam Du – Jun 17, 2020

SuperStreetOnline how to
$500 Mod Every 2020 Toyota Supra Owner Should Do
Finessing the fitment on the A90 Supra to what Toyota should've done from the factory
Sam Du – Oct 8, 2019 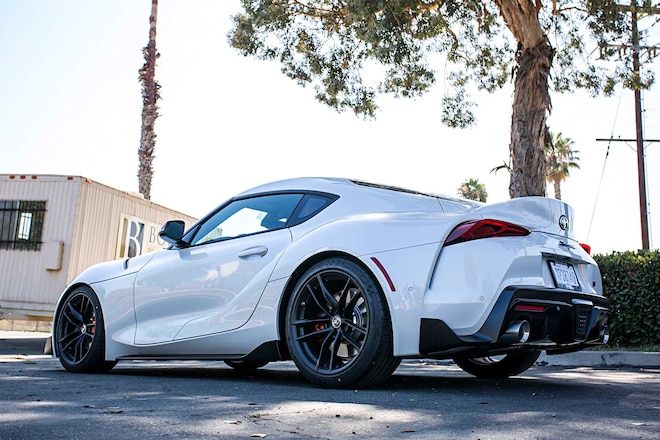 Project Suprasonic: 1995 Toyota Supra
It's obvious why Turbo is doing a project on the Toyota Supra. When the fourth-generation Supra was released in the United States more than a decade ago, the car was well ahead of its time. It has a rock-solid, sequentially twin-turbocharged engine pumping out
Pablo Mazlumian – Jan 24, 2004
SuperStreetOnline
SuperStreetOnline Magazine
how to

Shooting Nitrous On A 500hp Supra Turbo
Nitrous. Turbo. Blowers. Used to be people aspired to install a power adder and be content with the large power increase netted from such a component. Add a supercharger to your BMW, for example, and increases in power up to 45–50 percent can be realized.
Craig Lieberman – Feb 1, 2000
THE END. CHECK BACK LATER FOR MORE CONTENT.